It has been one of the most talked about decisions from the Cy-Hawk game on Saturday that was pivotal even though it happened in the second quarter.

The Cyclones were leading Iowa 10-3 and had the ball moving near midfield. On 3rd & 8, Sam Richardson hit Allen Lazard crossing the middle of the field and the officials originally gave the first down to Iowa State. But after video review, re-spotted the ball back a half yard or so making it 4th & 1 from the Iowa 49 yard line.

The Cyclones elected to punt and actually pinned Iowa on their seven yard line and exacerbated that with a sack forcing a 2nd & 16 from their one yard line. But a C.J. Beathard 44 yard scramble set Iowa’s wheels in motion before tying up the score at 10. The Cyclones did answer with a touchdown before the half to limit the impact of all of this but who knows what happens if the 4th & 1 decision was different? Would a two score lead have altered the fate of the game any differently than what we saw play out?

It was a topic I scratched the surface on a couple of weeks ago when I investigated if Paul Rhoads has indeed lost his bravado over his six seasons in Ames in terms of how often he “goes for it” on fourth down. As I mentioned in that article, there are so many variables to consider that I couldn’t possibly pin it all down for one broad column on the topic.

But, when looking at a specific situation like this we can compare some things and see what shakes out. Two variables in that article that I mentioned but didn’t include in order to keep things simple were the period in which the play took place and the score margin at the time of the play.

My first question about how Paul Rhoads tends to handle these calls came thinking about the current score of the game and how often he went for it with the lead in that area of the field as opposed to being down. To keep everything “apples-to-apples” and avoid the 4th down attempts that were out of desperation, I only included the first three quarters. Also, the main point of this is a comparison to Saturday’s decision so I’m only looking at short distances and the middle of the field. It’s broken out by section of the field but is also limited to the kind of no man’s land where a punt often times does no good and a field goal would be extremely long to attempt. 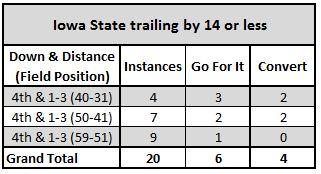 As you can see, Rhoads has elected to go for it in this 30 yard section 30 percent of the time in his first six seasons and that slowly increases as they got closer to the goal line, which makes complete sense.

How did that decision alter when Iowa State had a lead of 14 or less or the game was tied? 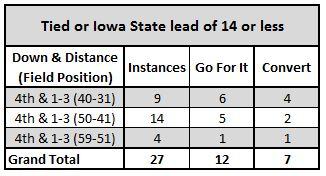 That cranks out to going for it in short yardage situations at 44 percent of the time. That’s a bit curious, right? That is almost exactly the situation that Iowa State was in on Saturday when Rhoads opted to punt.

But going back to my question a couple of weeks ago, has Rhoads changed his approach over time on these decisions? Take a look at the yearly break down in this same situation with the lead: 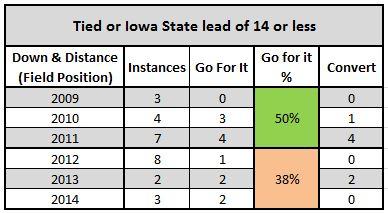 The sample is small and probably inconclusive but you can’t help but raise an eyebrow. Rhoads has elected to go for it on fourth down less in the past three seasons than in the first three by 12 percent. BUT, almost all of that came in 2012 where the Cyclones were in short yardage fourth downs while leading eight times but went for the conversion just once.

There are still detailed variables at play here that we are not diving into. From the main point above, is this more of a correlation/causation deal where Iowa State is more likely to go for a conversion when they have a lead simply because they are probably better than that team; hence playing with the lead? What was the exact score situation when the decision was made?

The claim has been made that Rhoads simply has lost his “River Boat Gambler” side which seems true based off perception and even some of the data. But perhaps the more alarming point is this; when ISU has the lead and a chance to put the hammer down on the opponent and they hit a 4th and short situation, they’re punting more often and playing for the win less often.

Yeah, it isn’t the fourth quarter and plenty of time remains on the clock but extending drives and extending leads early can often win games late. I’ll say this, so many decisions are weighing the risk and reward to try and follow the right path but in football, far too many times the age old method that has been the status quo and accepted is often times the far too conservative route.