I had just finished my first week of school as a freshman at Iowa State University. The football program was on an upswing of epic proportions compared to what I was used to my entire childhood. Just a week prior, Iowa State kicked off the entire college football season in the Eddie Robinson Classic with a frantic come from behind effort against third ranked Florida State (yes, he was in). It was a loss but Seneca Wallace sparked his Heisman campaign and we had hope in this team.

On this day, the Cyclones opened their home schedule for the season by welcoming the Kansas Jayhawks to town.

This is an event that I have tended to at least gloss over on an annual basis. Why? Because that game—that day—was the last time Iowa State won their conference opener in a season. 2002. Even with all of the relatively successful seasons from then to now and a few undefeated non-conference seasons to start, ISU still hasn’t been able to start the conference season 1-0 since 2002; a win that was a 45-3 rout over Kansas and their new head coach, Mark Mangino.

In the last 12 years, the Cyclones have played six conference openers at home (including the last four), four on the road, and the two neutral site games with Kansas State in Kansas City. Six of the games have been against top 20 teams and six of the losses have been absolute heartbreakers by a touchdown or less (2005, 2008, 2009, 2010, 2013, and 2014) that include a double-overtime loss in Lincoln (that was nearly sealed with as a win with an interception), a 20-point halftime lead against Kansas in 2008, a blocked extra point to tie a game in the waning seconds in 2009, a fumble controversy against Texas in 2013, and a big lead lost to Kansas State last season with an interception controversy to boot on ISU’s final drive. 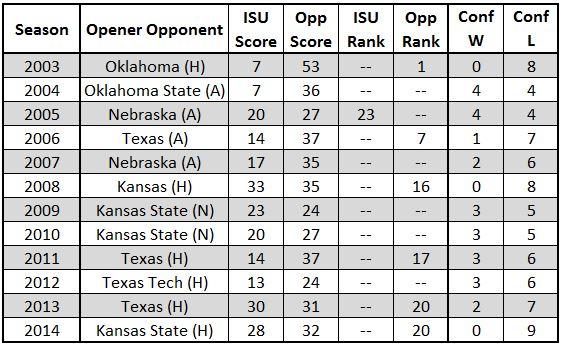 Despite my rambling on the conference opener rut that Cyclone football is in, that isn’t really what I wanted to write about for you today.

It’s kind of strange how things work out sometimes.

August 31st, 2002 was also the first game of the 2002 Big 12 season for Iowa State. It was a win and as I noted but it was also game number one for another streak. My personal streak of home Iowa State games attended.

I don’t bring up my 87 game streak to pat myself on the back. I bring it up as a means of offering a different perspective for a struggling football program. The Cyclones are 44-43 in that time. I’ve seen greatness and I’ve seen, well, not greatness. From “The Run” to second half collapses, from lost division titles to upsetting the No. 2 team in the country, from sellout crowds of 61,500 to barely more than 30,000 in the stands on Senior Day in 2002, from Shaky Smithson to an angry UNLV coach, from sub-zero games to tornadoes, from 2,138 points for Iowa State to 2,264 for their opponent, and from the Cyclones gaining 17.55 miles of total offense to their opponents gaining 19.05.

While the most vocal segment of the fan base has been making noise since the wheels came off in 2012 and spiraled down in 2013 there has been a deluge of negativity and cynicism and almost any opportunity. Whether the comments have been made out of jest or anger, they have been there at every turn.

The frustrating thing about being a diehard fan of a team or school is that you are not alone. You have tens of thousands of other fans with the same common goal that react 180 degrees differently than you do to successes and failures. That is frustrating; but like being cut off while driving down the interstate only to see the culprit is sporting Iowa State University license plates, it can also be deflating.

Some feel better with incessantly speaking their mind while others just want to hide from it, recover, and hope for better. I, and probably many others, choose to be more reserved and not pour more gasoline on the fire because we see no way that it can help the program. Right, wrong, or otherwise that is my approach. Neither method is anything other than personal preference.

The common adage you’ll hear from many is, “if you want to see change you have to vote with your money and quit showing up for games.” I can’t comment on the global veracity of that comment, but, I don’t find it to be all that true at Iowa State. In fact, I think it would hurt more than anything. Not just the program perception and attractiveness but also the dollars lost in revenue for an athletic department that is, as my favorite professor at Iowa State would say, “just the small potato.”

Ben Bruns pointed it out on the podcast with Chris Williams a few weeks ago and it gets echoed through the Athletic Department, University, City of Ames, State of Iowa and even further; we fans are the biggest asset that our Athletic Department has.

We show up. As a player, give us your heart and effort and we will collectively back you up.

So while the cynicism has been out stronger than ever since the double overtime loss at Toledo regarding the newly renovated Jack Trice Stadium being less than the new capacity of 61,500, I am in the complete opposite camp. Those people can go but say they don’t want to, maybe to prove a point. I, on the other hand, want to go but for the first time that started on that August day of 2002, I may not be able to.

My personal streak that started with Kansas may well end with…Kansas. Because life beckons and someone has to coach my daughter’s soccer team!

But, I know I’m not alone. I’ve been fortunate to be able to make it to all of these games with family events and an understanding and supportive wife. Plus I’ve always lived within 30 minutes of Ames. Many of you have logged many more hours behind the steering wheel and miles on the road.

It usually isn’t easy, is it? Walking into a cold game in late November during a two win season takes a special breed. It takes Cyclone fans.

Perhaps my personal streak is ending along with the streak of losses in conference openers; both could be book-ended with wins over Kansas. Whether we’re drawing near to a bookend on the Paul Rhoads era has yet to be seen but I’m still going to show up, hope for the best, and see what happens whenever I can.

And, I know that even many of the vocal negative ones will too. All fans can’t always be on the same wavelength with our thoughts but we’re all Cyclone fans. Which means we’ll keep coming back.