I have to admit, I found a positive to this bye week. Normally it seems like a bye week comes at about the right time when players are dinged up as the games rack up. But this year, after a crushing defeat and a stewing fan base a game was needed immediately more than ever to erase the bad thoughts.

But, we couldn’t be so lucky.

However there is one small bonus at least for us dudes making these picks; since there is no Cyclone game to pick, anonymous Hawk trolls can’t feign outrage at us being homers picking Iowa State to win. We’re Cyclone fans, we’re biased, and we’re homers so how dare we pick Iowa State to win a game that is expected by basically everyone to be close?!?!

Anyway, here are the standings: 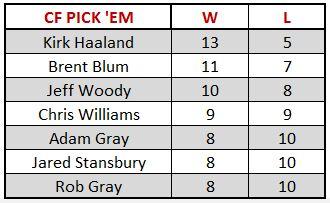 Kansas @ Rutgers (-12.5)- Why are we picking this game? Why is this game being played? (Yes, I see the irony in those questions.) Greg Schiano is still at Rutgers with Ray Rice, right? I’ll take them.

Oklahoma State (-4) @ Texas- I don’t trust Mike Gundy because he uses a lot of gel and wears a visor and I’m not sure I trust his football team this year. That said, I’ll take the Cowboys anyway.

BYU @ Michigan (-5.5)- After already playing the University of Utah, next on the Michigan schedule is the Jazz, they also have a November date with Mitt Romney. Michigan 24 BYU 17.

Kansas @ Rutgers (-12.5)- You might be asking yourself, “Self, why the heck is Kansas playing at Rutgers?” Well, here’s why. Charlie Weis wanted to schedule non-conference games at places where he felt they could recruit. That logic earned him $24.5 million to not coach. Rutgers 34 Kansas 24.

BYU @ Michigan (-5.5)- HOW MANY TIMES ARE WE PICKING BYU THIS YEAR, WILLIAMS. I have no idea. I am going to take the Wolverines to cover simply because it’s at the Big House and that’s a long way to travel if you’re a weary football team. At some point, lady luck has to go away from the Cardiac Coogs, right? U of M.

USC (-5.5) @ Arizona State- USC. I think the Trojans get back on track here. Coming off of a rivalry loss is always tough sledding as the next opponent when the favorite is the one to lose. Kessler is the real deal and he proves it in the desert.

Mississippi State @ Auburn (-3) – WHAT!? Auburn is a FAVORITE!? I get it’s in Auburn, Alabama. I get that they won a national championship and appeared in another one in the past 5 years, but there is no WAY this team should be a favorite here. A new starting quarterback maybe fixes some of the warts on offense, but tackling is poor on defense, and Muschamp has to find a fix and fast. Give me Dak Prescott and the ‘Dogs.

Kansas @ Rutgers (-12.5)- J-Hawkz. Quality football on the coast here, people. I think Kansas covers, basically because I don’t think Rutgers has the capacity to stop an FBS team (even though it’s Kansas). Plus, you talk about a distracted football team? Their COACH was suspended. Side note– I will not be watching this game. I’ve got a lawn to watch grow.

TCU (-8.5) @ Texas Tech- TCU. In the immortal words of the poet Taylor Swift, "And baby now we got baaad blooood….it used to be maaad loove….so take a look at what you’ve dooone, ’cause baby now we got baaad blood, hey!" The Frogs dropped 82 points on Tech (in a football game) and then took Tech’s lunch money from their toilet-water-soaked shirt pockets. Tech wants this one BADLY, but I don’t think they can slow down Boykin and that offense. They’ll score 35+, but won’t hold the Frogs under 50.

Oklahoma State (-4) @ Texas- Cowboys. Jarrod Heard is a much better fit for the Horn’s offense because he’s better at hiding warts with his legs. However, Emannuel Ogbah for OSU is a really lethal force who plays inside. This position is better at negating QB runs than a defensive end. I think OSU slows down UT effectively and covers.

USC (-5.5) @ Arizona State- Two teams that had high expectations in the preseason and have underachieved thus far. Honestly, I have no idea here so I’ll take the points and the home team to cover.

Mississippi State @ Auburn (-3) – Don’t mess with streaks, right? Gus Malzahn and Auburn have lost eight games in a row against the spread dating back to last year. So I guess I’ll take the three points and Mississippi State.

Oklahoma State (-4) @ Texas- I think that the Longhorns made some progress last week against Cal but will stick with my preseason thoughts. Being that I was high on OSU, I’ll ride them here and take the Cowboys to win by a touchdown.

BYU @ Michigan (-5.5)- How brutal is BYUs schedule? They are battle tested and I think you could make the case that Michigan is the worst team they have faced to date. Give me BYU and the points. BYU 21-20

Mississippi State @ Auburn (-3) – Auburn is a train wreck and nothing leads me to believe they will win this game based on how they’ve played…..but I’ll take them to win 34-28 anyway.

Oklahoma State (-4) @ Texas- Texas had a nice rally against Cal, but I’m still skeptical of that offense. Cowboys by 10.

BYU @ Michigan (-5.5)- Tanner Mangum and the Cougars fell back to Earth last week against UCLA, but Michigan isn’t UCLA. BYU’s offense gets rolling and the defense contains Rudock and co. enough. Cougars win 24-17.

Mississippi State @ Auburn (-3) – Auburn has been one of the most disappointing teams of the season so far and that doesn’t stop here. Dak Prescott causes havoc on the road and the Bulldogs win 17-10.

Kansas @ Rutgers (-12.5)- Much like my picks, these programs don’t have much going for them these days. The Scarlet Knights have one win over FCS Norfolk State, but they’re still without head coach Kyle Flood. Plus, Kansas is, well, Kansas. The Jayhawks make it a game on the road but the Knights win in the end 31-21.

TCU (-8.5) @ Texas Tech- The Red Raiders will be flying high after last week’s um…. butt kicking against Arkansas, and the Horned Frogs might be running out of bodies on the defensive side of the ball. Tech sticks around for a while but Trevone Boykin helps TCU pull away late. Frogs win 49-35.

BYU @ Michigan (-5.5)- Big House won’t rattle BYU’s Tanner Mangum, despite his charmed Hail Mary Tour being interrupted last week. Heck, even the Rose Bowl didn’t intimidate Mangum until a late pick sealed the Cougars’ fate against a very good (and top-10) UCLA team. I like BYU to at least cover.

USC (-5.5) @ Arizona State- Sun Devils have underwhelmed so far and their best win is against a solid FCS team that UNI drilled last weekend (Cal Poly). USC has faced and succumbed to its kryptonite (a.k.a., Stanford). Steve Sarkisian rises like a Phoenix in Tempe. Trojans cover.

Mississippi State @ Auburn (-3) – OK, I’ll stick with my semi-large gut this one. Auburn’s a train wreck and showed no resilience after Leonard Tournette broke its jaw and ankles last week. Dak Prescott’s been brilliant, throwing for five touchdowns and no picks — including an expert evisceration of LSU two weeks ago. I’ll take the Bulldogs and the points.

Kansas @ Rutgers (-12.5)- Picking this game is like trying to decide whether I should download Kylie Jenner’s app or wade through a swamp infested with leeches. Terrible options, both. So I’ll run like hell from this one, screaming all the way … and shout out a Rutgers cover before trying to cleanse my memory of the experience.

TCU (-8.5) @ Texas Tech- Horned Frogs have underwhelmed, to put it mildly, so far, but I have more faith in Gary Patterson to suture up that decimated defense than I have in Kliff Kingsbury to keep his “ass-kicking” train rolling now that Big 12 play has arrived. Still, it’s in Lubbock. I can’t see TCU covering, but think the Red Raiders probably will go down narrowly with a fight.

Oklahoma State (-4) @ Texas- New rule of thumb: Pick against Texas every week. Why? It pays. Cowboys have been riding roughshod over vastly inferior foes, but don’t forget what a battle it was in week one against an OK Central Michigan team. Charlie Strong is a class guy, but the ‘Horns ain’t a-gonna win this one. Pokes win ugly and manage to cover.