The Iowa State offense in the second half last week wasn’t the only disappointment in central Iowa this past Saturday. The Cyclone Fanatic staff picks were also stale, poorly timed, and off the mark. Here are the standings through the first two weeks: 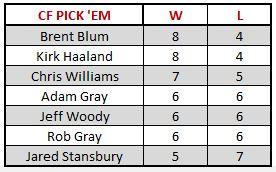 Mississippi @ Alabama (-6.5) – This seems like a statement game from Alabama. Alabama 31 Mississippi 14.

Iowa State @ Toledo (-7.5) – Toledo has a quarterback with two first names in Phillip Ely. If you know Iowa State history, you know that is terrifying. See Chase Daniel and Brian Luke from ’05. I don’t know how healthy Demond Tucker is going to be, but the defense has to force 3+ turnovers. I think they do and win. Iowa State 30 Toledo 27.

Mississippi @ Alabama (-6.5) – Rebels had a crazy defense last year and it’s looking pretty good again this year, but, in Tuscaloosa I’ve got to roll with the Tide.

California (-6.5) @ Texas – Texas will come out fired up playing for their former Athletic Direct–PPPFFFTTTTTT! Not really, but I do think they’ll cover.

Texas Tech @ Arkansas (-11.5) – I don’t really have much faith in Texas Tech but I’m also not sure about Arkansas winning by roughly the same number of points that they scored against Toledo last week. I could never cheer for Bret Bielema and I can’t pick him in this spot either.

Pittsburgh @ Iowa (-5.5) – I think Iowa is able to get up just enough for this game just a week after their Super Bowl to win but not cover.

Iowa State @ Toledo (-7.5) – I have a lot of mixed opinions on what I’ve seen from Iowa State so far and on what Toledo did last week in Arkansas. In short, I think Iowa State is still so much better than last season and the offense should be able to play better. I think Iowa State covers but winning will come down to making one or two plays late in the game.

Auburn @ LSU (-7.5) – Weird game. Teams had totally opposite games last week. That half point is my deciding factor though. LSU 28, Auburn 21

California (-6.5) @ Texas – I guess I’m simply to the point where I need Texas to actually do something on the field before I’ll have faith in them. Golden Bears 31, Horns 14

Texas Tech @ Arkansas (-11.5) – I really have no clue here. The Hogs will be motivated. Tech’s offense is solid but has one of the worst D’s in college football. I guess I’ll take the points, but I’m not confident about it. Arkansas 34, Texas Tech 24

Pittsburgh @ Iowa (-5.5) – Pitt is without its Heisman contending running back and still doesn’t know who its quarterback is? Give me the Hawks a home by a 24-14 final.

Everyone tell Adam congrats as him and his wife welcomed a baby girl into their family this week!

Auburn @ LSU (-7.5) – Geaux Tigers. There is just not enough consistency for Auburn right now. Gus is a wizard, but Jeremy Johnson seems like he doesn’t really get it yet, and the Bayou Bengals are physical as hell.

Mississippi @ Alabama (-6.5) – Rebels to cover. Bama is Bama and it’s in Tuscaloosa, but I just feel like Ole Miss has more firepower than people are giving them credit for. I don’t think they win, but I expect them to cover.

California (-6.5) @ Texas – Horns. I know nothing about Cal. I don’t think a mid-level Pac XII team comes into Austin, though, and wins by more than a touchdown, no matter how down UT may be.

Texas Tech @ Arkansas (-11.5) – Arkansas. Not related to the game, but you know how people say people look like their dogs over time? I think that’s happening to Bielema…

Pittsburgh @ Iowa (-5.5) – Hawks. I don’t think Pitt is as good as people are crediting them for, and I’m a CJ believer.

Auburn @ LSU (-7.5) – The Tigers dodged a Bulldog bite last week and it’s concerning how Dak Prescott carved up the pass defense. Still, an SEC road win is an SEC road win. Auburn, meanwhile, SHOULD HAVE LOST at home to a middling FCS program. So I’m obviously picking LSU, right? Nope. The visiting Tigers should get Jovon Robinson back and will keep it close.

Mississippi @ Alabama (-6.5) – Ole Miss looked like Baylor 2.0 in its first two wins, thrashing a lousy FCS team (Tennessee-Martin) and a rebuilding FBS squad (Fresno State). But an average of 74.5 points?!?!? The Mississippians will need every bit of confidence gleaned from that achievement in Tuscaloosa, where dreams often go to die and reality hits like a Jonathan Allen sack. ‘Bama by 10 or more.

California (-6.5) @ Texas – Game one of the Mike Perrin as Texas AD era will end in nervous celebration. AKA, a win fraught with flaws. While the Golden Bears have run away with a pair of wins, they did come against Grambling State and San Diego State. Juggernauts they are not. The Longhorns have been tested (and humbled by Notre Dame) and the offense (cough, cough) helps them get to 2-1 with a cover.

Texas Tech @ Arkansas (-11.5) – Two givens: 1) Arkansas will exceed 500 yards of offense just like it did in last week’s shocking loss to Toledo. 2) There’s no way in hell the Red Raiders hold them to 12 points like the Rockets somehow did. Tech will get its points, too, but will be playing catch-up. Hogs should get their running game mojo back a bit and collect some takeaways. Razorbacks win and cover.

Pittsburgh @ Iowa (-5.5) – Hawkeyes seem to have a potentially nice team that can offer run-pass balance on offense and a salty defense. Great, no, but good enough, I think to hold off a solid Pitt team at Kinnick. The Panthers lost Heisman Trophy candidate running back John Conner to injury, but Qadree Ollison’s been inpressive in his stead, averaging 7.8 yards per carry with two rushing TDs and a receiving TD. Iowa 24, Pitt 14

Iowa State @ Toledo (-7.5) – Apparently the smart money’s on the Rockets, so I’m going with the Cyclones. Why? The offense has to click sometime. And Toledo is a good place to start. Why again? The Rockets can’t cover anybody. Arkansas passed for 412 yards vs. Toledo and somehow lost. Sam Richardson’s best career day (351 yards passing) came against the Rockets last season. Repeat. ISU wins outright by a possession.

Auburn @ LSU (-7.5) – Before the season I had Auburn winning the SEC and going to the College Football Playoff. Their performance last week against Jacksonville State has me questioning that choice. Leonard Fournette picks up where he left off last week in Starkville and LSU wins 35-24.

California (-6.5) @ Texas – Jared Goff is one of the most underrated quarterbacks in college football for Cal. Their 396 passing yards per game is good for No. 4 in the country. Texas’ secondary is the weakness of the defense. Doesn’t add up to a good time for the Longhorns. Cal 49-35.

Pittsburgh @ Iowa (-5.5) – Iowa keeps the momentum rolling against a Pittsburgh team that had trouble with the Youngstown State Fighting Bo Pelinis. Hawkeyes win 35-24.

Iowa State @ Toledo (-7.5) – The Iowa State defense comes up with a crucial turnover late in the game. Then Sam Richardson leads the game-winning drive to set up a Cole Netten field goal. Cyclones win 31-28.