A cool crispness in the air is becoming more frequent in central Iowa as September invades our lives sooner than we could’ve imagined. But, the good news is September brings a good friend along with it riding shotgun, College Football.

We all love college football, but especially we love pretending like we know what we’re talking about to give our expert opinions — otherwise known as complete guesses.

Week one is behind us and the standings are about as important as the Cubs still in contention in the NL Central in May (yes, I know, 2015 is different for the Lovable Losers…for now). If you didn’t know, Brent Blum is the biggest Cubs fan around, making his place atop the leader board here rather fitting.

But perhaps the most intriguing part of the standings is that Jeff Woody is at the bottom of the proverbial goal line pile of pickers. You know, the guy that knows more about any position’s responsibilities in a given formation than the rest of us know about the entirety of the game of football. 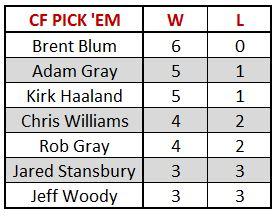 Houston @ Louisville (-11) – I can see the promo now: TOM HERMAN vs. CHRIS KLENAKIS, there will be PISTOLS firing in Louisville. Houston gets brought back to earth in a big way. Louisville 48 Houston 20.

Oklahoma @ Tennessee (PICK) – The Big 12 needs this game after the disaster Texas put out there for the world to see last week. Oklahoma 28 Tennessee 20.

LSU (-3.5) @ Mississippi State – Hard to gauge LSU since their game was rained out.  I actually think that hurts them in this game. I’ll take Prescott, Mullens, and the points at home.  MSU 24-16.Boise

State (-2.5) @ BYU – The BYU win against Nebraska was huge, but it could doom their season with the loss of Taysum Hill.  You would like their new QB to get a couple games under his belt before going up against Boise State.  Because he won’t, I’ll take Boise to win 34-21.

Houston @ Louisville (-11) – Tough week 1 game for Louisville but it looked like they got it figured out in the 2nd half and settled in.  I look for them to welcome Tom Herman to the big leagues by thumping Houston.  Louisville 49-21.

Oklahoma @ Tennessee (PICK) – My first reaction…."Huh?  How is Oklahoma not favored?"  I’ve been burned many times by betting heavy on lines I think are ridiculous.  So it is time for me to learn.  I’ll go opposite of what I think and take the Vols to win 31-27.

Welp, the calculator is currently broken at cfbanalytics.com and we can’t figure out how to use the abacus, so I’m going to have to wing it!

Boise State (-2.5) @ BYU – I’d love for nothing more than Boise to lose every game forever. With no Taysum Hill that is less likely but I’ll take the Cougs at home to win and cover.

Houston @ Louisville (-11) – I think Houston will put up a fight but Louisville is too much on the road. Cardinals win and cover.

Oklahoma @ Tennessee (PICK) – Bob burns me every year as I want to have faith that the Sooners are a national title contender. He likely will again this week, but let’s hope not. Boomer!

Iowa (-4.5) @ Iowa State – I’m fairly confident that Iowa will score somewhere between 20-27 points in this game because I have already been won over quite a bit by the Cyclone defense (yes, even with just the UNI sample) and their offense is a pretty known commodity. Though, I do still wonder if Beathard will stay consistent. I think it will boil down to the Cyclone offense versus the Iowa defense (hey, I wrote about that!), primarily the ability to run the ball effectively at the right times and not so much the average yards per carry. Do that and take care of the ball and I think the Clones score just enough to eek out the close win.

Oregon @ Michigan State (-3.5) – Well, I picked Michigan State to go to the College Football Playoff so I obviously have them wining this game. Do they cover? I hate that half point but I’ll say yes. East Lansing will be a zoo and I’m not a believer in this Oregon team. Sparty 34, Ducks 28.

LSU (-3.5) @ Mississippi State – I’m wary of any team not named Alabama having to cover more than a field goal in Starkville, but I’m all in on the Tigers re-boarding the College Football Playoff contention bandwagon this season. Plus, I’d love to hear another bizarre yet jubilant post-game soliloquy from Les Miles. Dude should be a slam poet. He’s the anti-Mark Dantonio (see below). Sunny-side up LSU by 6

Boise State (-2.5) @ BYU – No Taysom Hill, no … winning follow up to last week’s stirring and once-in-a-lifetime Hail Mary comeback in Lincoln for the Cougars. Tanner Mangum falls from the stratosphere and the Broncos bring an improved defense and just enough offense into Provo to eke out a win and a cover.

Houston @ Louisville (-11) – The Tom Herman era at Houston began with a 52-24 win over an awful Tennessee Tech team last week as the Cougars put up more than 600 yards of offense. The pieces (including Herman) are in place for Houston to have a nine- or 10-win season and I fully expect them to cause fits for Bobby Petrino’s Cards. Plus, there’s the Chris Klenakis factor. Louisville probably wins, but it won’t cover.

Oklahoma @ Tennessee (PICK) – I’m not buying the Vols as being totally back despite being young and talented. A good team, yes, but a team capable of fending off a hungry, tough-in-the-trenches Sooners squad dead set on becoming nationally relevant again? Nope. Big day for Baker Mayfield. Oklahoma wins, potentially by double digits.

Oregon @ Michigan State (-3.5) – This game could set the stage for continued sky-high success for both Michigan State football and basketball — whether it ends in a win for the home team or not. According to the Detroit Free-Press, a slew of top roundball and gridiron recruits will be on hand along with the ESPN GameDay crew. That atmosphere, plus the bad taste cooked up by an underwhelming week one win over Western Michigan, brings out the best in MSU, which barely covers, but still can’t banish coach Mark Dantonio’s soul-sucking scowl.

Iowa (-4.5) @ Iowa State – C.J. Beathard finally provides the Hawkeyes with a bold, gun-slinger mentality behind center, and LeShun Daniels is the real deal at running back. But I believe ISU quarterback Sam Richardson will outshine Beathard in the passing game this Saturday — both by taking care of the ball better and producing more big plays. Still, Iowa wins the trenches, but not by as much as some might expect. I’m leaning toward a three-point Iowa win, but not a cover. In my mind, a pick ‘em game.

LSU (-3.5) @ Mississippi State – LSU’s season opener against McNeese State was cancelled, so you know the Bayou Bengals will come ready to play on the road in Starkville. Leonard Fournette opens up his Heisman campaign with two TD’s and Dak Prescott throws a late pick that sinks the Bulldogs. Tigers win and cover 31-21.

Boise State (-2.5) @ BYU – Go on, make the joke. I know you want to make the joke. The Cougars broke my heart last week and I heard all about it in the press box at Jack Trice Stadium. After that, I can’t ride against these guys. Tanner Mangum doesn’t miss a beat replacing Taysum Hill and BYU wins 28-17.

Houston @ Louisville (-11) – I’m still new to picking the spread so I think I’m doing this right. The Cardinals hung around with Auburn last weekend, but their offense isn’t great and the Cougars can always put up points. I think Louisville wins this one, but I’m not so sure about that -11. Louisville wins 31-24, but Houston covers.

Oklahoma @ Tennessee (PICK) – Not many people seem to dislike the SEC as much as Bob Stoops, but Butch Davis might be starting to get this thing rolling in Knoxville. Plus, the Volunteers have a wide receiver named Pig Howard. How do I not pick someone named Pig? It’s time to party on Rocky Top. Tennessee 34-31.

Oregon @ Michigan State (-3.5) – This is the game that I’ve had the most trouble with throughout this week. I think the Oregon offense might have the pieces to put up points on Michigan State, but then I remember that Connor Cook and the Spartans aren’t too bad themselves. I hate to go against my family here (my Uncle is an Oregon season ticket holder), but I’m going with the Spartans, 49-42.

Iowa (-4.5) @ Iowa State – Jack Trice Stadium will be rocking when these two teams take the field Saturday afternoon. The Cyclones will be just as fired up out of the gate and jump out to an early lead. CJ Beathard leads the Hawkeyes back and then Cole Netten puts through a field goal to win it for Iowa State, again. ISU 31-28.

LSU (-3.5) @ Mississippi State – Cowbell. For some reason, this seems like a game that is going to have a lot of very, very hard hits. I think because it is in Mississippi and it’s an SEC slugfest, the game stays close. I’ll take the Dogs and points and a Dakota Prescott big play or two. Don’t ask me to pick anyone outright.

Boise State (-2.5) @ BYU – I’ll take the potato horses – "Man BYU played great last week in that win at Nebraska! That quarterback sure is something coming off that injury! Wait…he’s hurt again?" Broncos on the road.

Houston @ Louisville (-11) – Cards. As much as I would LIKE to take Herman over Klenakis, I just can’t. Herman himself has talked down his own team. I would love to be wrong, but this might be a 2+ touchdown win at home for the Birds.

Oklahoma @ Tennessee (PICK) – Boomer. Tennessee’s pass defense is less than ideal. They may have a ton of speed, and they may have former Iowa State GA Derek Day on staff, and they may wear brighter colors, but when you give up 420 passing yards to Bowling Green, don’t expect Baker Mayfield to not try to beat that number. I’ll take OU in a fun one.

Oregon @ Michigan State (-3.5) – MSU. Vernon Adams sustained a pretty sizable concussion last week, or so it looked. He now has to get on a plane, fly 3 timezones east, and play a7pm game which will seem like 10pm kickoff to the west coasters. I think Michigan State is too tough and too physical. Give me Sparty.

Iowa (-4.5) @ Iowa State – I AM SO EXCITED FOR THIS GAME. Iowa looked good. Iowa State looked good. We had no expectations for either one, and now we have a chance to see what each team is made of. ISU needs to establish a ground game and stop the run. Iowa needs to develop a down-the-field passing game for long yardage situations and not allow Sammy to get comfortable. As for the pick? Another game you would NEVER see me put money on outright. But I do believe this game is within 4 points. I’ll take the Cyclones to cover (at minimum). If you had to make me pick a final score, I take State, 27-24 in a thriller.