It’s as lose-lose of a situation as a guy (or gal) sitting in my chair can draw up. Pick Iowa State to do worse than they eventually end up doing and you’re a hater. Pick the Cyclones to exceed expectations and regardless of logic, I’m a homer with no credibility.

This will be the most read column on our site this month though and it has nothing to do with my wit, charm and good looks. It’s because fans love predictions.

With that, we all know that I’m all about fishing for clicks (sarcasm alert) so without further ado, here are my 2015 Iowa State football predictions with commentary to go along.

The Panthers appear to be somewhat down compared to recent years but more importantly, Iowa State can’t lose to an FCS program three years in a row. Am I right? Am I right? This prediction has way more to do with the Cyclones than it does with Mark Farley’s squad, a group that is always salivating when it invades Jack Trice Stadium.

THE PICK: — WIN — A healthy and improved Iowa State team takes care of business on opening night of the new Jack Trice Stadium with a solid double-digit victory.

The sound coming out of Iowa City this summer is eerily similar to what we have heard in Ames. An embattled Kirk Ferentz has made culture changes within his program and as a result, the Hawkeyes will be an improved football team in 2015. To me, quarterback C.J. Beathard and a rebuilt offensive line that recently lost two starters to the NFL will decide Iowa’s fate.

THE PICK: — WIN — The road team has won three in a row in this series.

Thanks to a forgiving schedule, Iowa should have a better record at the end of the year (compared to Iowa State) and as always, the Hawkeyes will probably be a touchdown favorite in this specific game.

Give me the Cyclones by a field goal though. The teams are pretty even. Iowa State is at home and this program has constantly been a pain in the rear for Ferentz, who is only 7-9 against the Cyclones since he got to Iowa in 1999.

Plus, if there’s one team on the schedule that this specific Iowa State team should be brimming with confidence against, it’s the Hawkeyes.

Without much question in my mind, this is Iowa State’s most difficult non-conference game. I’m at a crossroads here as head-to-head, if Iowa State indeed starts 2-0, the confidence that would produce could will very well lead to a Cyclone victory against the favorite to win the MAC.

However, can we really expect a program that has only won five games in two years to “know how to win” three games in a row to launch 2015?

Below: Toledo running back Kareem Hunt is one of the best in all of college football. 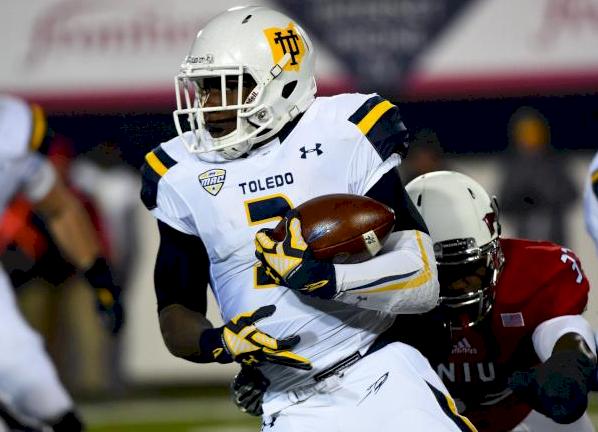 New Kansas coach David Beaty has made noise on the recruiting trail early on in his tenure but unfortunately, he still has to coach Charlie Weis’ “piece of crap” of a team to lead for at least a year.

THE PICK: — WIN — Kansas is by far the worst team in the Big 12. The Jayhawks might be the worst power five program in America. Iowa State wins this one convincingly.

This is a very winnable Big 12 road game. It’s a true tweener on the 2015 schedule – a game that could go either way. Texas Tech’s defense was embarrassingly bad last year (the Red Raiders finished 2014 ranked 126th out of 128 FBS teams in scoring defense) but you know that with Kliff Kingsbury at the helm, the Red Raiders will put up points against mostly anyone.

THE PICK: — LOSS — Again, I just can’t see this team hopping out to a 4-1 or 5-0 start. On paper, Iowa State is right there with Tech though and might even be better.

Look on the bright side…It’s always fun to see a national title contender led by a Heisman front-runner in person.

THE PICK: — LOSS — At least the Cyclones are getting these two games out of the way at the same time. This two-week stretch like a Band-Aid on an arm full or hair – it’s best to just rip it right off! 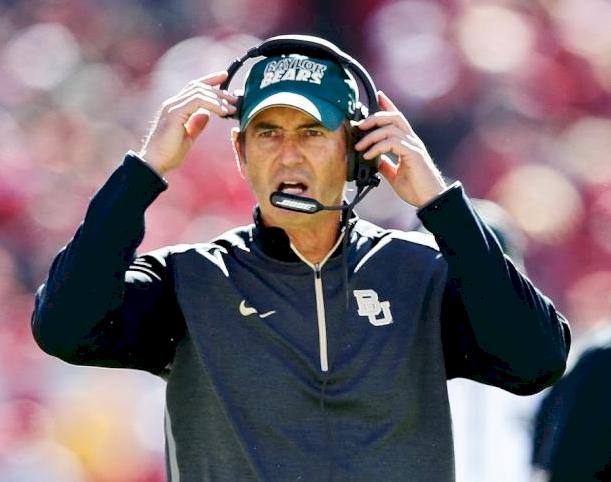 Halloween night should be amusing in Ames. These two programs have staged classics the last two years and I’m predicting another one in 2015. The Longhorns should be better in Charlie Strong’s second season but I still think this program is a year away from even being in the conversation for a Big 12 championship.

THE PICK: — WIN — TCU and Baylor will likely throttle Iowa State in the two weeks prior. This feels like a vintage Paul Rhoads type of game to me where somehow, the Cyclones will surprise the masses after being left for dead by many. We will hear a lot about Big 12 parity this year and a game like this will be evidence of that.

The closer we get to the beginning of the season, the more we are hearing “experts” tab the Sooners as a contender to upset Baylor and TCU in its two-man show to win the league.

I recently had Phil Steele on my radio show and he’s incredibly high on the Cowboys this season. The more research I do, the more I think that this team will be right up there with Baylor, TCU and the Sooners. The Big 12 very well could come down to a four-team race.

THE PICK: — LOSS — Iowa State just doesn’t have the personnel to complete with this level of a Big 12 team.

Based off of Bill Snyder’s consistent history of overachieving, I know that this is dangerous and probably even stupid. However, I’m calling for this program to finally digress, a tad, in 2015. Other than what we saw in 2013, this game has been close every year since Paul Rhoads took the Iowa State job in 2009.

THE PICK: — WIN — This is of that Big 12 parity that I’ve written about. Matchup wise, it’s always a good fit for Iowa State to pull off an upset. When it comes to personnel, there usually isn’t that large of a gap between the two programs. It usually just comes down to the Snyder-factor. He’s just so damn good of a football coach.

The Mountaineers are one Big 12 program that I don’t feel like I have much of a read on at all.

THE PICK: — LOSS — This is far from being one of those automatic losses for the Cyclones but the matchup here is never great either.

I have Iowa State going 5-7 this year but doing it in a fairly unconventional way. On paper, the first five games on the schedule are the easiest, no doubt. But cultures don’t just change overnight. This stuff takes time. Call it a cliché, but Iowa State doesn’t know how to win…yet.

Let’s say hypothetically that Iowa State indeed goes 5-7 in the exact same way that I spelled out. Paul Rhoads would be retained as Iowa State’s head coach for 2016, right?

My guess is yes.

I see two major yet realistic objectives that need to be fulfilled by this program for 2015 to be a success.

1) Protect your house. Iowa State went a combined 2-11 at home over the last two years. When fans opt to attend home games, they need to at least think that there is a chance at victory, which brings me to…

2) Be competitive. The greatest compliment I can give the early Rhoads era teams is that regardless of the opponent, fans always had that “what if” ticking the back of their brains with upset on the mind. When I see TCU, Baylor and Oklahoma (and maybe even Oklahoma State) on this year’s schedule, I’m thinking, “no chance.” Is this a result of an improved Big 12? Perhaps. But embarrassing blowout losses we all witnessed last year have soured that hope for wild upsets.

A quick, injury-free start to 2015 is just what this program needs.