AMES — Joel Lanning wanted to play when he warmed up on the sidelines during last season’s loss to Kansas.

But was the strong-armed then-redshirt freshman ISU quarterback ready? In retrospect, not quite.

“I would much rather be playing right now than back then, with what I know now,” said Lanning, who’s engaged in a hotly-contested battle with junior Grant Rohach for the No. 2 quarterback spot. “Just coming into camp, I have a lot more confidence. Just playing, I think, faster and more efficiently than I would have been last year. Because I was younger last year, I didn’t really understand what I need to do to prepare myself. I think going through a 2-10 season last year and just seeing what (starter) Sam (Richardson) and Grant go through to prepare just helped me. It’s making me focus a lot more.”

Lanning’s finally primed for some game reps behind center.

Cyclones coach Paul Rhoads said on media day they’ve tinkered with some packages to allow him to see the field as a runner and even a receiver. The 6-2, 232-pounder from Ankeny knows all about that intriguing possibility, of course, but is keenly focused on the mental aspects of the game as the competition for the No. 2 spot rages.

“That’s the talk right now but who knows what’s going to happen in the season,” Lanning said. “Things change when the season starts.”

One thing that’s extremely unlikely to change throughout what ISU hopes is a badly-needed bounce-back 2015 season: Richardson’s status as the clear starter. That’s fine with Lanning and Rohach, but it doesn’t mean they’re not pushing him, too.

“It’s awesome,” Richardson said of the battle between his backups. “It’s heated. It’s two guys that I know very well and they’re doing everything they can to get on the field. It’s fun. They’re great competitors and great players — gonna be on the field eventually. It’s a lot of fun, I guess. It’s cool.”

Rhoads also termed the quest for the No. 2 spot as “fun” to observe.

Rohach, who has thrown 10 career touchdown passes to eight interceptions, would seem to have the inside track based on experience. He’s also shown significant signs of progress from spring to fall — as have all the quarterbacks in year two of offensive coordinator Mark Mangino’s system.

“From a knowledge standpoint, we’re light years from where we were last year,” Rohach said. “Sturdy’s told us that many times. And the meeting room, it’s more talkative than it’s been. Me and Sam are the oldest and Joel is just — he, I mean, he’s old now too, technically. So we have a lot of experience in that room. I think it helps out the young guys a lot too.” 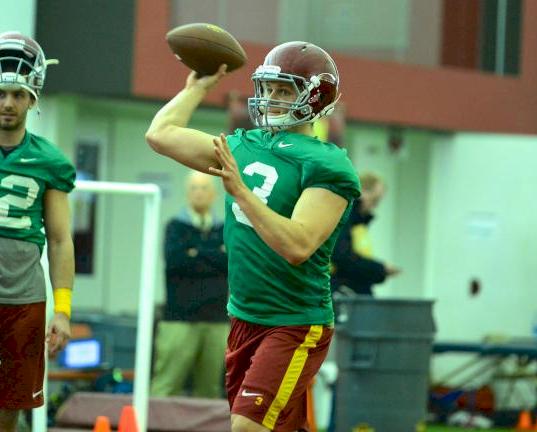 “Joel’s biggest advancement is above his shoulders,” Rhoads said. “The understanding of being a Division I quarterback; comprehending the offense, making the checks, having the poise to do all that. He’s very skilled as a passer and I think if you polled the coaches or even the players, they might tell you, ‘Well, Joel throws the best ball. Joel throws the tightest spiral,’ etc.; but you’ve got to have that complete package and I think that’s where he’s advanced the most.”

“I think all aspects of their game have gotten better,” Sturdy said. “Obviously Grant’s further along just from a knowledge standpoint of playing in games and just being a little bit older than Joel, but I think both of them have progressed in all areas. We’ve worked really hard on fundamentals and all aspects of playing the position. We’ve worked extremely hard on that. I’ve seen a tremendous amount of growth there with both of them on that. Game management skills, as far as decision making and all those things, have come a long way with both of them as well. If you really just break it down, I think fundamentally they’ve both taken big steps. It’s showing up in their playmaking ability, their accuracy, and all the things that go along with throwing the football and moving the chains. So I’m excited at the growth, but I’m excited about where they can take it to. I think there’s room yet.”

For Lanning, that may finally mean taking the field as a quarterback this season. Maybe for an occasional series or two. Maybe more. The learning curve’s no longer long and winding. He’s nearing nuance detection mode, where the final, necessary tweaks can only be made by actually experiencing real game time.

“If you’re iffy on something, you’re second-guessing yourself and you don’t have confidence in your ability to play the game,” Lanning said. “It’s huge. Now I think — I know I have a lot more confidence than what I did, so I’m just going out there and executing the offense how they want it.”

“He’s not there yet, but he brings enthusiasm to the role every day,” Rhoads said. “He’s embraced it. He’s not head down, pouting about it. He’s good with the ball in his hands and he’s getting reps. But it is the deepest position on the team and that’s a good thing.”

*** Sturdy reinforced the long-held and accurate view that Lanning possesses a very strong arm. Here’s what else he said about that specific attribute: “He can throw it. He can whistle it. There’s plenty of guys that can throw the football. The thing is, I tell those guys all the (time), you can find a bunch of guys that can throw the football, but being accurate, making reads, throwing it to the right place, having a sense of anticipation and timing and all the things that go along with making a great quarterback? That takes time. That takes a lot of work and Joel can really throw the football. Now all those other things are starting to show up, too. So, again, exciting.”