On a soggy Sunday afternoon in central Iowa, mid-April Major League Baseball games normally make for great background noise to a needed-nap and not a lot more. However, yesterday’s Kansas City Royals triumph over the Oakland A’s was anything but. The rather meaningless MLB regular season game was damn entertaining.

For multiple reasons, this series had been chippy dating back to Friday night.

On Sunday, things heated back up when Scott Kazmir plunked Lorenzo Cain on the knee in the first inning. At that point, two Royals coaches (including manager Ned Yost) were ejected and the benches proceeded to clear for the third time in three days.

How exactly does this relate to Iowa State? Stay tuned.

Later in the game, Royals reliever Kelvin Herrera was tossed after allegedly throwing at Brett Lawrie, (whose dirty slide earlier in the weekend acted as fuel being thrown on this fire). Herrera was then rightfully ejected. So was another Royals coach. Lawrie was pissed. AND SO WAS THE KANSAS CITY CROWD. 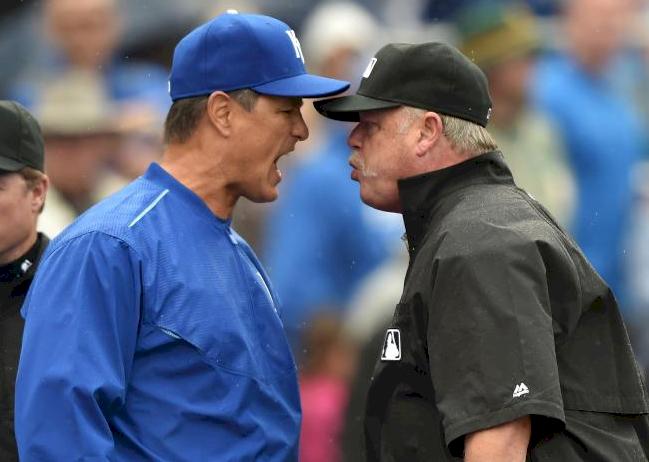 Thanks to an emotional 8th inning, the Royals won the game but when the dust had settled, I found this tweet from Kansas City Star KU basketball writer, Rustin Dodd, to be of interest.

“Say with the utmost respect to all involved parties, but Kauffman Stadium is transforming into the Hilton Coliseum of MLB stadiums,” it read.

The comparison makes a lot of sense. I’d characterize both of these fan bases to be passionate and blue collar in nature. Both fan bases appreciate success and love their teams come hell or high-water.

Good or bad, Hilton Coliseum has a reputation for being fanatical (that’s the nice way of saying that Clone fans boo a lot) toward officials. Likewise, the Royal faithful do anything but take it easy on umpires, even in mid-April.

Dodd’s tweet has mysteriously been deleted (which makes no sense to me as nothing written is controversial in any manner in my opinion) but trust me when I say the response he got from Kansas basketball fans was anything but fuzzy toward the Cyclone Nation.

The tweets he received from KU fans were so intense and so loud (I had planned on quoting them in this piece but since the tweet was deleted, that’s now impossible) that dare I say, it’s almost as if the Jayhawks view Iowa State as a rival these days.

And Kansas fans should think that.

After all, Fred Hoiberg has now won three of his last four games against the Jayhawks and Bill Self, a streak that includes two in a row in Kansas City.

Don’t expect this fresh rivalry (yes I’ll call it one now) to settle down anytime soon either .Cheick Diallo’s upcoming decision will likely cause heat between the two programs. In addition to that, it’s likely going to be a three-team race to be the Big 12’s preseason No. 1 this offseason featuring Iowa State, Kansas and Oklahoma.

Iowa State still has a lot of work to do to be on Kansas’ level. Winning in Allen Fieldhouse is a must. Snapping KU’s streak of 11 straight Big 12 regular season titles would be quite the milestone as well.

However, Kansas fans are certainly treating Iowa State a lot differently than they did five years ago and that alone is a sign of program progress in and of itself.