KANSAS CITY — Round three. It’s on.

The game that everybody wanted to see this weekend is going to go down on Saturday night (5 p.m. on ESPN) in the Sprint Center but for Fred Hoiberg’s Cyclones, it certainly wasn’t easy.

In Friday night’s 67-65 Big 12 Tournament semifinal victory over Oklahoma, Iowa State did what Iowa State does. That’s get down by double digits early, storm back and hold off a late rally.

Been there, done that.

Now, the stage is set and the Cyclones aren’t exactly being shy about this season’s rubber match with Goliath either.

“There’s no secret,” explained Naz Long. “We are glad that we get another shot at them. We beat them at our place. They beat us at their place. This is the rubber match that everybody has been waiting for. It’s no secret that guys in this locker room are very excited about the opportunity.”

Which begs the question, are the Cyclones and Jayhawks rivals? It depends on whom you ask, but the crescendo is undeniable.

Head-to-head, the series has pretty even since "The Mayor" took office. Heck, Iowa State beat the Jayhawks in Kansas City exactly one year ago. But the talented Cyclones failed to accomplish a preseason goal and knock Bill Self’s program off of its throne during the Big 12’s regular season.

It’s damn close, but an Iowa State win on Saturday would be the gasoline that this fire needs to erupt.

Five thoughts from the Big 12 Tournament…

THAT’S WEIRD: At halftime, Bryce Dejean-Jones, Abdel Nader and Naz Long were Iowa State’s leading scorers and after missing their first 11 3-point attempts in the game, the Cyclones were somehow tied with the Sooners at 29.

“I thought Bryce and Abdel had unbelievable energy tonight for us off of the bench,” Hoiberg said. “Obviously we are going to need that tomorrow because we have guys who have played heavy minutes in these first couple of games.”

Monte Morris and Georges Niang are the guys Hoiberg was referring to.

Morris has played 77 of the 80 minutes Iowa State has competed in over the last two days (with zero turnovers to boot). And the guy who lost all of that weight in the offseason – Niang – has toughed through 76.

Back to the bench though, and specifically BDJ.

This is why after he didn’t play in the second half during the largest comeback in Iowa State history (against Oklahoma on Big Monday two weeks ago), the rhetoric I attempted to push was, “Yo, you’ll need this guy down the stretch.”

Dejean-Jones had a modest 10 points on Friday but his defense, specifically in the first half, was outstanding. 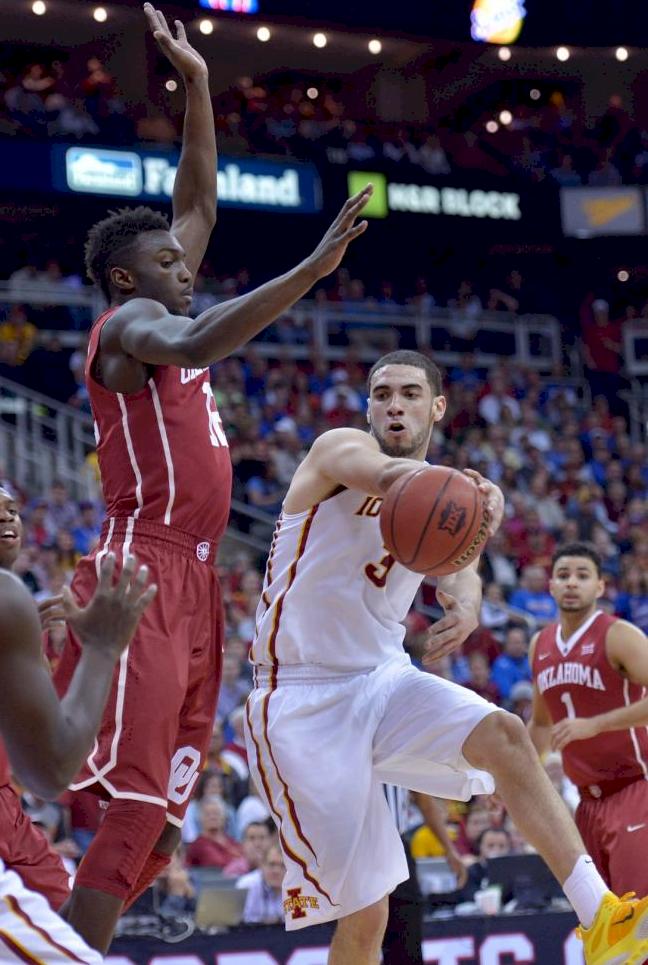 99 OUT OF 100: How did Ryan Spangler not kiss in that layup to send that game into overtime?

“Spangler will make that 99 out of 100 times,” Monte Morris matter-of-factly said.

Monte’s analysis of that play is as efficient as his nation-leading assist-turnover ratio. Spot on.

THE GLASS: Oklahoma outrebounded Iowa State 43-27 and grabbed 16 off of the offensive glass.

“We did not do a good job of rebounding the ball,” Hoiberg said. “We weren’t making contact on the cutouts and their length.”

How was Iowa State able to overcome such a lopsided stat? The Cyclones outscored the Sooners 35-24 in the paint.

“That was the goad coming into this game was to try to win that paint battle so that was a positive,” Hoiberg said.

TICKET PRICES: Want to get into the big game on Saturday night? As of midnight, the cheapest ticket on Stubhub.com is going for $270.

SEEDING HOLDS TRUE: After what was perhaps the wildest season in Big 12 basketball history, other than one minor TCU “upset” over Kansas State on Wednesday, the seeding completely held out! That’s some weird, wild stuff.

Speaking of wild, if you’re anti-booze, basketball and fun, stay the heck away from Kansas City on Saturday.

The atmosphere is going to be epic.