KANSAS CITY — They locked arms, eyes fixed on the rim as the crowd rose in anticipation of the blessed repeat event.

Big-time work. Game-winning work, while slashing and pounding Kansas in the paint during a Cyclone comeback for the ages Saturday night at the Sprint Center.

All that remained were Naz Long’s two free throws with 2.9 seconds left. Another Big 12 Tournament championship would be cemented via a 70-66 rubber-match win over the mighty Jayhawks.

And Dejean-Jones smiled — yes, smiled — while basking in the wild, well-earned celebration.

“It’s probably the most closest team I’ve ever been on,” said Dejean-Jones, who along with Nader played a crucial bench role in the dousing of the Jayhawks. “And it’s not just through the players. It’s down to the coaches, manager, trainers — everybody’s a real close-knit group. I’m just glad to be a part of this.”

It was Dejean-Jones who completed ISU’s rapid climb from 17 points in arrears to even with eight minutes left.

He veered into a passing lane, stole the ball, drove down the floor and soared for a dunk while being fouled.

“(That) might have been the most important play of the game,” Coach Fred Hoiberg said.

Dejean-Jones missed the accompanying free throw, but scored on a layup moments later that gave the Cyclones a 53-51 lead they would not relinquish.

Nader surged to the rack next, then Dejean-Jones sliced through the lane for another bucket.

All tolled, the uber-reserves scored 10 straight points when the game got crunchy — and Nader punctuated the roommates’ run with a layup that resulted in ISU’s biggest lead, at 59-52, with 5:28 left.

“Abdel may have played his best stretch of the season there,” Hoiberg said.

Nader scored 13 points while grabbing four rebounds. Dejean-Jones had seven points and the clutch steal. Both helped the Cyclones craft a dominant 46-22 edge in points in the paint

“It was just a great feeling,” Nader said.

Fans were touched and inspired by athletic director Jamie Pollard’s powerful words of support and appreciation from a hospital bed at Iowa Methodist Medical Center in Des Moines.

Pollard, who suffered a heart attack Monday night and underwent open heart triple bypass surgery the following night, thrilled the thousands at the pre-game pep rally with these pre-recorded words: “I really wish I could be at the Power and Light District this afternoon and at the Sprint Center tonight,” he said. “Although I can’t be there physically, I will be there emotionally. Thank you so much for all your thoughts and prayers. I will be back. Go Cyclones!”

Hoiberg was touched, too. He’d dedicated last season’s Big 12 Tournament title to his college coach Johnny Orr. Saturday, he said, “was for Jamie.”

“I know it was a stressful three days, but the end result, I think, was great for Jamie and his therapy,” Hoiberg said. “He’s the best. He’s a great guy to work for, a great boss. And to win this one for him is really a special moment.”

ISU won its three tournament games be a combined eight points, forming the lowest championship victory margin in the history of the event.

“There’s no quit in us,” said tournament MVP Georges Niang. “I think that’s what makes us special.”

Jameel McKay cradled his young nephew, Josiah, in his arms as he prepared to cut a strand of nylon from the rim in the postgame celebration. It touched the 6-9 energizer deeply to reconnect with family, who watched him score 11 points and grab eight rebounds while ISU repeated as a conference tournament champion for the first time in program history.

“I don’t get to see him that often,” McKay said of Josiah. “So for him to share this moment is just an unbelievable experience.”

McKay’s roommate, Monté Morris, reveled in the moment, too.

The NCAA record-shattering sophomore point guard made the all-tournament team, averaging 15.3 points, 3.7 assists, 3.0 steals and zero turnovers in the three wins at the Sprint Center.

“I did it for my family,” Morris said. “My grandma’s going through illness right now and she was just at home watching. So I did everything for my family and Cyclone nation.” 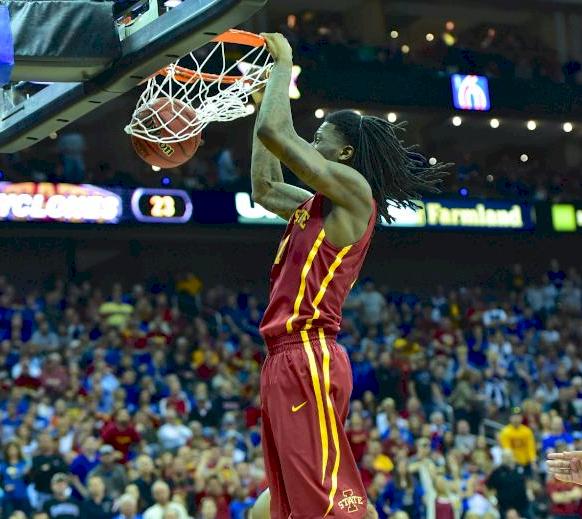 As Kansas powered to a 17-point lead, it seemed Wayne Selden Jr. would get the better of his former Tilton (N.H.) School teammate, Georges Niang.

Selden scored a game-high 25 points and tied the game late, but Niang capped an MVP tournament performance by scoring 19 points and rising up for a critical late steal to earn bragging rights over his close friend.

For now, anyway — but there wasn’t any boasting in the immediate aftermath of a draining, hard-fought game. 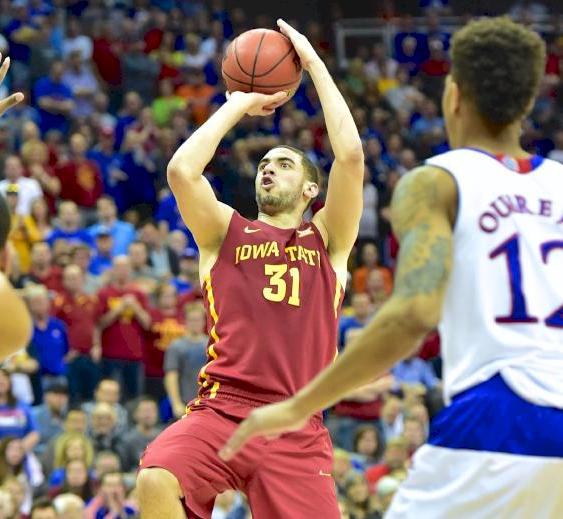 Carol Hoiberg and her husband, Fred, shared a tender embrace as the celebratory net-cutting loomed. Then hugs followed for son, Jack, daughter, Paige, and twin sons, Charlie and Sam.

When asked to sum up their feelings about a second straight turn on the Sprint Center floor, the twins said this: “Pretty much one word to explain this: awesome.”

“It’s been amazing, but this team is so resilient, they fight back,” she said. “I’m really not surprised they did this, to be quite honest. They’ve got it in them and they’re fighters. I’m just so happy for all of them.”

What about the twins? Will this become an annual March routine for them?

“I hope it happens every March,” Carol said with a laugh. “We’re all starting to think this is normal.”