He may or may not look back as he boards a plane bound for home, but wherever his eyes are fixed, they won’t remain dry.

“I’m getting on that plane later today so I can make the press conference tomorrow,” said the former Iowa State assistant, who earlier today announced on Twitter he’d return to his hometown of New York City to join Chris Mullin’s staff at his alma mater, St. John’s. “Looking outside that window, it’s going to be full of probably some tears — and there will be people looking at me like, ‘What the heck happened to this guy?’ The simple thing is everything’s full of emotion. There are some people that are probably questioning exactly what I’m doing, but they don’t know how difficult it is to leave (Cyclone Coach) Fred Hoiberg and this program. Because it is. It’s extremely difficult.”

He said he informed ISU’s current players of his decision on Monday.

“The mixed emotions are there because five years, what we’ve turned this place into, it will always hold a special place in my heart,” said Abdelmassih, who worked under Hoiberg in the Minnesota Timberwolves’ front office before the duo came to Ames together. “I’m leaving behind a lot of people that I care about, especially the guys on the team, the guys I recruited. Yesterday was one of the most difficult days of my life, telling those guys. They understood, but at the same time, it was a very emotional day.” 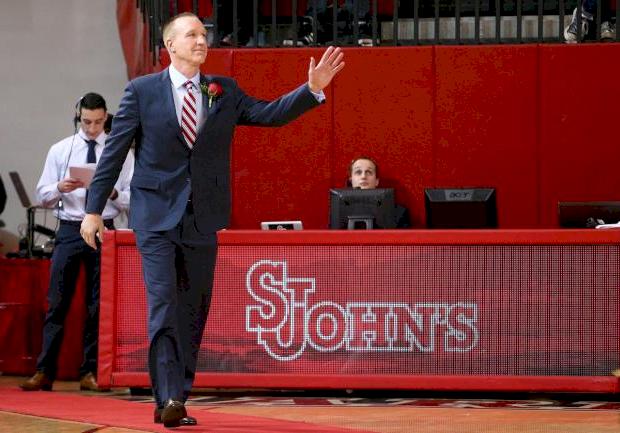 ISU has now made a school-record four straight NCAA Tournaments. Abdelmassih helped make that so.

He’s also obviously been the lead recruiter for current high school/transfer top talents and his departure may complicate matters for targeted Class of 2016 members.

“That part is always difficult because the lifeline of your program is recruiting and I’ve developed so many great relationships that are intertwined with Iowa State,” said the Brooklyn native, whose wife, Kelly, hails from Davenport. “Guys that I am recruiting and I know I can’t get at St. John’s — there’s only one other option and that’s Iowa State. I’ve talked to quite a few people about that already. I want to help this place as much as I possibly can. I’ve said that I hope to be sitting at the Final Four next year wearing my Iowa State stuff, because I’m certainly not going to give it to anybody. I feel too attached to the place to give my stuff away and I plan on wearing it at the Final Four next year and seeing those guys go out and represent the way I know they’re going to do.”

So Abdelmassih’s dresser won’t be filled entirely with Red Storm gear. Cardinal and gold will be tucked into a special space.

“I know I was quoted as saying that I would never leave Fred’s side,” Abdelmassih said. “If there’s one job in the world I would leave for, it was St. John’s. It holds a special place in my heart. Just eight years ago I was doing laundry and rubbing sweat of the floor as a manager at that place. It’s really surreal — and will be really surreal tomorrow when Chris Mullin gets introduced as the next head coach and I know I’m going to be going with him. It’s an unbelievable feeling. The tough (thing) is just leaving Fred. He’s family and he’s like my best friend, so it’s extremely difficult.”

Abdelmassih met Hoiberg shortly after graduating from St. John’s. He clearly made a good impression, as he became a Timberwolves staffer shortly thereafter.

“(I was) just really trying to get my foot in the door in the NBA,” Abdelmassih said. “I didn’t know anybody really and was really a pest to the Timberwolves organization — Fred and Rob Babcock. Rob Babcock’s the assistant GM who is probably one of the more influential people in my life, with what he’s meant to me. I interviewed on the phone a couple times and Fred and I talked and they took a chance on me and I proved myself. He and his wife took me in like their own and really let me grow as a person. Of course, moving to the Midwest is intimidating, getting outside of the city and a comfort zone, where all your family is close. It was a risk that clearly got me to this point and this part of the country will undoubtedly always hold a special place in my heart. I consider Iowa home, because I was fortunate enough five years ago to really meet the best thing that’s ever happened to me, and that’s my wife. Without all of these connections I’d have never of met her. All of it’s connected.”

As is the return. Tears may flow as the plane goes wheel’s up, but Abdelmassih doesn’t really consider it a permanent departure.

Now he has family roots in Iowa, too — both literal and figurative.

“Unbelievable,” Abdelmassih said when asked about Hoiberg’s level of support. “I know some day I’m going to work with that guy again — I hope at least. But he and his wife (Carol), they’re family. So yes, he’s been unbelievably supportive. He and Chris Mullin are friends. It’s not every day you can transition to a dream job and work with what you consider family. That’s what it’s going to be at St. John’s. That’s what it was at Iowa State.”