LOUISVILLE, Ky. — Don’t know much about UAB? You’re not alone.

Iowa State’s Round of 64 opponent in the 2015 NCAA Tournament is young, talented but honestly, it’s a surprise that the Blazers won last week’s Conference USA Tournament as a 4-seed.

We’ve got you covered though.

Prior to tip time on Thursday (11:40 on truTV), here are five things that you need to know about Iowa State’s opponent.

UAB’s leading scorer, Virginia Tech transfer Robert Brown, has shot the basketball 188 times more than any other player on this team’s roster. One hundred and eighty-eight!

The third-team Conference USA forward averaged 12.6 points per game this season to lead the way for the Blazers and is what Iowa State assistant coach Cornell Mann describes as a “high volume shooter.”

“He is very aggressive,” Mann said. “When he gets the ball he is going to attack. When he starts to attack, he will look to score the ball on just about every catch. He is still capable of making a pass because he is savvy enough and skilled enough.”

Expect Iowa State to throw Dustin Hogue on Brown to start the game. After that, the Cyclones will likely mix things up and keep fresh bodies on the junior who averages 33.3 minutes per game.

Mann went on to compare Brown’s role on UAB’s roster to that of Buddy Hield and Oklahoma.

“I will say that Brown is a little more savvy off the dribble – meaning that his attack is a little more vicious mainly because of the high volume deal,” Mann said. “He can take a bad shot and he might make some of those. We have a lot of guys, like Bryce, who will jump on him as soon as he comes in the game.”

How young? The Blazers are actually the third-youngest team in NCAA Division I men’s basketball. In fact, add up UAB’s entire roster and you will find only seven years of experience combined.

The Blazers will be fired up to meet the Ninth-ranked Cyclones, no doubt. But is this young of a group ready for this large of a stage?

Regardless, look for UAB to be a fixture in this tournament for years to come. 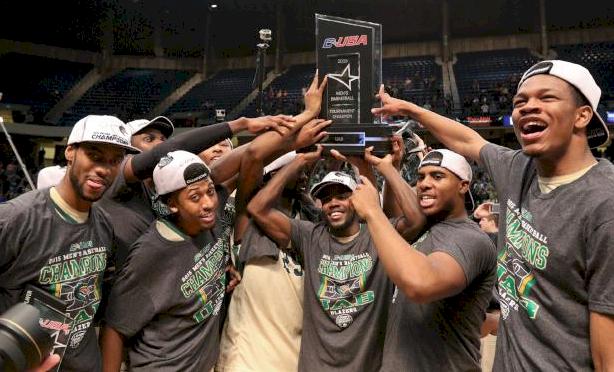 …Not Robert Brown, according to Mann, who created Iowa State’s game plan for the Round of 64. A 6-foot-9 freshman named William Lee is that man.

“A big-time athlete,” Mann said. “He can shoot the snot out of the ball. In the last five games, he is 7 of 13 from three. He can get a lot done from three as well as long two-point shots, which are the toughest shots in basketball. That kid is to me, the best player on the team. He isn’t averaging the most points but I think he is the best player on that roster.”

Lee, who averaged 7.8 points and 5.8 blocks per game this season, was named Mr. Basketball in Alabama last year.

Mann also said to keep an eye on UAB’s freshman point guard Nick Norton, who is a 40 percent 3-point shooter. In fact, that’s basically all he does. Of Norton’s 68 field goal makes this season, 58 of them have been from downtown.

UAB lost to a D-2 team in an exhibition game this season. Then, the Blazers started the season with a mark of 4-9. After going 12-6 in its Conference USA schedule and winning the league tournament, the Blazers are in the Big Dance.

The youth growing throughout the long season played a large role, but so did coaching.

Jerod Haase has a nice future in this business.

The former Kansas Jayhawk and Fred Hoiberg played against each other five times during their college playing days. Haase went 3-2 against The Mayor’s Iowa State teams. However, Hoiberg had one of the best games in his career against Haase in 1995 when he went 6-for-12 from 3-point range, scored 17-straight points and 32 total in a 69-65 ISU victory.