Somehow, the end of the regular season is here. It is March, and that means the stakes are raised and the consequences have escalated. Yeah, this game isn’t a part of a single elimination tournament and while this team isn’t going to win the regular season title they aspired for, if they don’t want to finish fourth in the league they need a win.

In the grand scheme of things, it doesn’t matter what seed they earn for their trip to Kansas City but 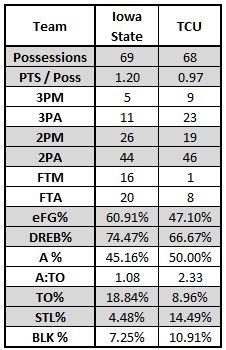 finishing in second place and a game from a share of the title sounds a hell of a lot better than another fourth place finish.

But the only way all of that likely happens is with a win in Dallas. What we have on Saturday is a precursor to how this team will play with their backs against the wall when elimination stares them in the face. March is when excuses, failures to prepare and lacking urgency end your season.

The last time these two teams met, Iowa State won comfortably and while both teams shot well from beyond the 3-point arc, the Cyclones rarely utilized it. The Cyclones won the game by dominating in the paint at both ends, excelling from the free throw line and dominating TCU on the glass. Though, the Cyclones did have some turnover struggles that mostly surfaced in a couple of bursts of multiple miscues.

When the Frogs have the ball…

The TCU offense isn’t setting the world on fire but they do a few things really well that make them difficult to deal with. Their problem is that none of those things that they do well involves putting the ball through the hoop and that tends to be a vital part of succeeding in this game.

But as I mentioned, they do some things really, really well to offset their inability to make shots (i.e. 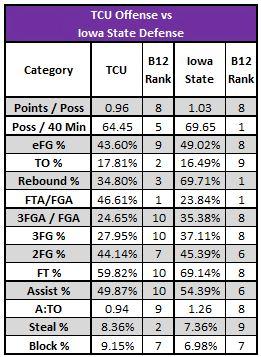 The Cyclone defense is still ever so slightly improving and they downright shutdown Oklahoma in the second half on Monday. Similar to TCU offense, the scoring rate isn’t the best but Iowa State does do some things really well. Primarily, their league best defensive rebounding percentage and opponent free throw rate which aligns with two of the strengths of the TCU offense.

Winning those two areas will be a big deal to determining how that matchup goes at that end of the court on Saturday.

TCU has just the ninth best scoring defense in the league allowing 1.04 points per possession but they do have a couple of strengths that can cause problems. They force the fourth most turnovers in the league at 19.7 percent and they do pretty well in keeping opponent shooting percentages down.

The other thing their defense has done a really good job of is limiting opponent 3-point attempts better than anyone else in the Big 12. Opponents are taking just over 25 percent of their shots from distance. Of course, in extreme cases with that stat one could wonder how much that is influenced by opponents getting easier shots instead and to that point opponents are shooting pretty well inside the arc at 47 percent in Big 12 play. 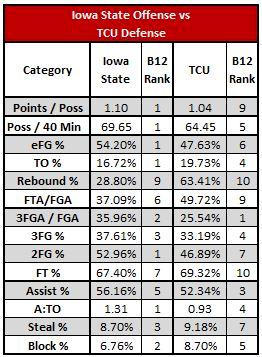 The Cyclone offense is well known enough that I don’t think much explanation is required but they’ve shot the ball exceedingly well in conference play and they lead the league with the lowest turnover rate. They get to the line at a decent rate and their free throw percentage is climbing from where it was a month ago.

The TCU offensive attack is led by Kyan Anderson and Trey Zeigler in the backcourt while Amric Fields has been doing damage all over the court, which is highlighted by his 34 percent shooting from the 3-point line. Fields has been their best all around scorer but he’s only averaging playing about half of available minutes.

After those three guys, TCU has a litany of versatile big guys that can be difficult to deal with. Fields is a great rebounder but he’s complimented by Kenrich Williams, Chris Washburn, and Karviar Shepherd.

Anderson is the primary creator and sports an assist rate north of 28 percent while Zeigler is next best in that regard in very solid at using the dribble to get into the paint. But, he can’t shoot a lick and there’s no reason to guard him outside of 15 feet.

I would suspect that Monte Morris will be tasked with slowing Anderson and he’s a pretty tough guard, even this year when his outside shot is only falling at a rate of 30 percent. Zeigler and Brandon Parrish are somewhat interchangeable and either Naz Long or Dustin Hogue can guard either of them though Hogue on Zeigler probably makes more sense. He has a little more size to combat Zeigler on his drives and strength to keep him out of the paint.

Honestly, the remaining matchups are pretty non-descript but the TCU post players can cause problems in the paint if they can gather offensive rebounds or openings in the defense. They play exceedingly hard and their intensity has to be matched or they will brutalize defenses. Tactically however, there isn’t a lot to worry about other than keeping things simple, beating them to spots to win position, and staying down and making them shoot eight footers instead of getting to the rim.

At halftime on Monday, we were all in disbelief. I certainly was, but I couldn’t help but lament how it appeared the season had turned on a handful of possessions gone astray over the course of the games with Baylor and at Kansas State. Those losses were tough but they were there for the taking and now Iowa State was down big to a really good team, at home. It wasn’t a good feeling.

But they fought back, played smart, and were extremely active on defense to cause problems for the Sooners. They same alertness and activity on defense will be needed at TCU and the rest of the season.

TCU in many rating models is far ahead of Kansas State, so this is a difficult game despite the perception of the TCU program. Throw that in with the quaint high school gym that this game will be played in and there is some reason for concern. The last two seasons, Iowa State hasn’t exactly crushed TCU on the road. In fact, the games have been semi-close (less than eight points) in the last couple of minutes each time.

But the Cyclones have something to play for as they closeout the regular season and they’re riding positive vibes after Monday and ramping up for post-season play. March is when success is truly established and legacies are constructed and that is what this team should be ramping up for.

I’m hoping they’ll come out strong and keep distance from the Frogs the whole way, but I think we all know it won’t be that easy. I’ll take Iowa State and the close win and at least a share of second place in the Big 12 standings.