Iowa State absolutely had to have that one.

Looking ahead at the remaining schedule, the Cyclones will likely be underdogs in road games at Oklahoma State (Wednesday, 8 p.m. on ESPNU) (although the Cowboys did lose to TCU on Saturday) and Texas (Saturday, 1 p.m. on ESPN2) this week. Baylor, who defeated Iowa State in January, will visit Hilton Coliseum on Feb. 25. A home date with a smoldering hot Oklahoma team still looms along with trips to Kansas State and TCU.

As far as the "experts" in Vegas are concerned, Saturday’s victory over a reeling West Virginia (19-6, 7-5) team was probably the closest thing to a “sure thing” for Fred Hoiberg’s squad left this season.

The next week will be a big one for the Cyclones.

Is this team a legitimate two-seed contender for the Big 12 Tournament or are the Cyclones looking at a 4-5 spot and possible date with Kansas in the semi-finals?

Iowa State is perfectly capable of winning at Oklahoma State and Texas but based off of this team’s history on the road, the way the league is playing out and odds in general, it probably won’t.

Hoiberg sees it as a great test.

“I’m excited about going on the road for two and I know our guys are as well,” Hoiberg said. “Having said that, we’re going into a couple of pretty tough places to win, like every place in our league.”

It’s important to keep Iowa State’s well documented road woes in perspective. The 78-73 loss in Lubbock on Jan. 24 was downright embarrassing but other than that, Iowa State’s three road defeats (in league) were against Baylor, Kansas and Oklahoma – none of which are anything to sneeze at.

“We have to find a way to take this on the road. We got off to a great start at Oklahoma but now it is finding a way to continually do that. Every media timeout is like a round of boxing. You have to win every round,” Hoiberg said. “I am excited to see how we fight through adversity this week when we go on the road because it will hit us and it will hit us hard. How will we respond to that?”

Jameel McKay blocked five West Virginia shots, which upped his average to 2.7 swats per game in 15 games this season. After the game, I asked the big man if he’d rather throw down a big dunk or block an opponent.

“I’ll have a good block because it’s more of a team statistic,” McKay replied. “It helps keep them from scoring. If you can get a good block, it usually leads to something good on the other end.”

Surprisingly, McKay’s block stat wasn’t his most important in the win. He entered the day a modest 50 percent free throw shooter but made 8-of-9 from the charity stripe against the Mountaineers. 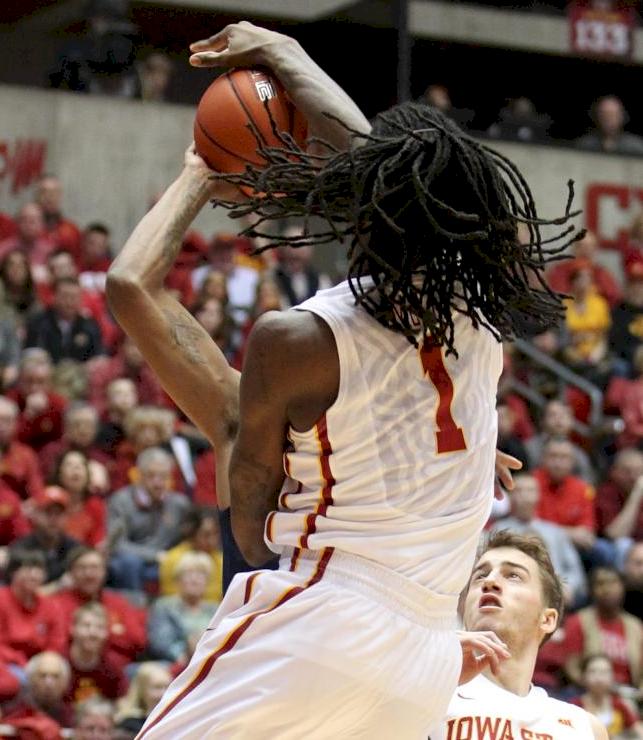 Let me tell you something: If you would have told me this July that Bryce Dejean-Jones and Abdel Nader BOTH would be coming off the bench for Iowa State in February, I would have called you a crazy man.

These days in Ames, that’s the reality of the situation and if everybody buys in, it might not be a horrible thing.

Dejean-Jones’ attitude has been scrutinized recently but since becoming Iowa State’s sixth-man on Feb. 7 vs. Texas Tech, he’s gone a combined 10-of-15 from the field including a 4-for-4 night on Saturday.

“Tonight he was out there, engaged and talking on the bench,” Hoiberg said. “It was great to see and then Nader was just awesome. He showed his length and skill-set at 6-6 and long.”

Nader, who we might as well just start calling “Mountaineer slayer,” had 15 points with seven rebounds. Dejean-Jones finished with 10 and three. 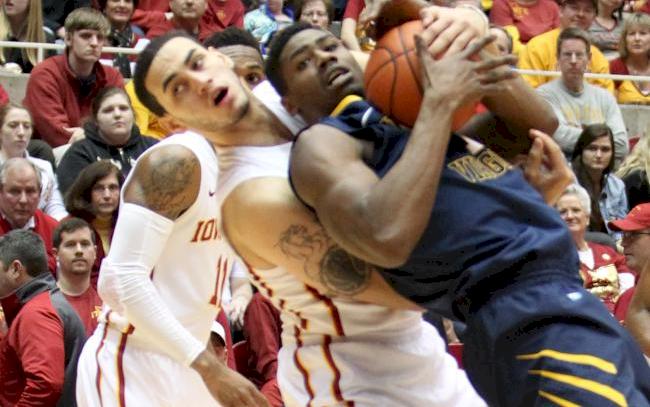 The start to West Virginia’s season was flashy. But perhaps that’s because the Mountaineers played the 224th toughest non-conference schedule in America?

Oh, you mean the one that featured two wins a piece over TCU and Texas Tech, Oklahoma at home (tip of the hat to that) and Kansas State without Marcus Foster?

Take this win in stride, Fanatics.

It was a nice and important win for the Cyclones but hardly tells us anything at all about Hoiberg’s team.

The next seven days however, will do just that.