The mostly reeling Mountaineers from West Virginia are blazing their trail to Ames and they’re bringing their overall record of 19-5 and league record of 7-4 with them. The first meeting in Morgantown was almost five weeks ago but I’m not sure if it seems like it has been longer or shorter than that.

It was a game that was as ugly as most Mountaineer games tend to be; physical foul fests that can be ugly for those reasons alone but the frenetic pace often forces many mistakes as well. It was a nip and tuck game in Morgantown where the Cyclones overcame foul trouble for two of their key cogs, 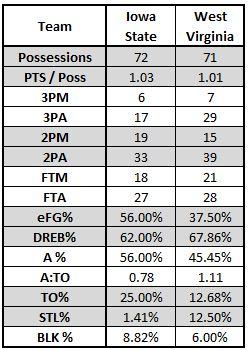 Ultimately, it turned into the Abdel Nader road show again as his 19 points paced the Cyclones to the victory. The rematch report is on the right and you can see that ISU shot the ball fairly well and rebounded the ball just well enough while overcoming their worst turnover game of the season at 25 percent.

When the Mountaineers have the ball…

West Virginia’s offense has slipped a little bit since the last game but they’re still scoring right at 1.00 points per possession in league play. Truth be told, they don’t score because of an offense that is effective or because they have great shooters; they simply get so many chances because of their outrageous offensive rebounding percentage of 43 percent (and they force a lot of turnovers, which we’ll get to in a bit).

The Cyclone defense—believe it or not—has a pretty decent defensive rebounding percentage coming in at third in the league and winning the battle on the defensive glass is of the utmost importance to thwarting the West Virginia offense. 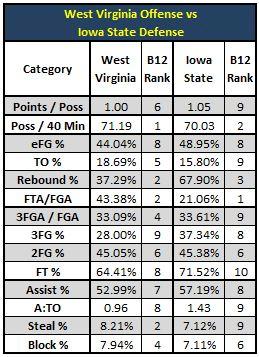 They do a decent job at avoiding turnovers but their offense isn’t often generated with passing with an assist rate at just under 53 percent.

The scoring rate that ISU has given up isn’t looking the best but they do have decent numbers in three of the most important areas. The rebounding percentage was mentioned above but Iowa State is also one of the best in the country at limiting trips to the free throw line and the field goal percentage allowed inside the arc is…okay. Sixth best at 45 percent isn’t outstanding, but it is a start.

Iowa State still has an elite offense in the country but especially in the Big 12. An average of 1.11 points per possession in conference play is really, really good.

They do it with the best shooting in the conference with an effective field goal percentage of nearly 55 percent and the best turnover percentage in the league. The funny thing about that is in the last handful of games there have been spurts of possessions for the Cyclones where they have been turnover plagued and it has been costly.

While there has been talk about this ISU team being one of Fred Hoiberg’s worst 3-point shooting teams, they are still hitting at a clip of 37.5 percent in league play, which is a very good number. The important part for the offense is that they are still so efficient inside the arc. One area that is still fourth in the league but lower than the normal Hoiberg standard is the assist rate being at 57 percent and 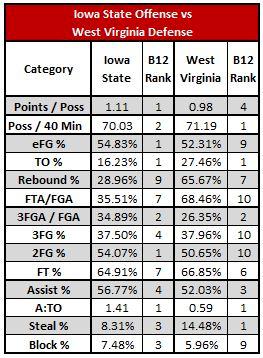 fourth in the league. That is a number that the staff would prefer to see up over 60 percent and closing on 65 percent.

The Mountaineer defense is basically the same as their offense in that they aren’t excelling with defending (or making, on offense) shots but they limit so many opportunities by all of the turnovers they force. Over 27 percent of opponent possessions in Big 12 play have ended in a turnover. That is b-a-n-a-n-a-s.

They are susceptible to giving up second chances on the offensive glass and they obviously send opponents to the free throw line at an amazingly high (and bad) rate. The West Virginia defense allows the second fewest attempts from the 3-point line but that is far more a product of giving up so much space on the back end of the press as teams look to attack and take advantage.

Juwan Staten gets most of the press for the Mountaineer offense but you could easily argue that Devin Williams, the gigantic man in goggles down low, is more crucial to their offensive success. Even Gary Browne scores at a greater rate than Staten, in part because of the steals he generates.

Jaysean Paige is one of the next most used players for the offense by attempting 23 percent of WVU’s shots when he is on the court. Paige and Jevon Carter are the two biggest threats for hitting 3-point shots but they’re both just above 35 percent which is good, but not great. Paige gets off 6.1 attempts per 50 possessions he is on the court, the most of any player in this game.

Williams is the primary rebounder but he’s backed up by Jonathon Holton who has very strong offensive and defensive rebounding rates.

While Staten’s scoring rate is down a bit from expectation, he has an assist rate over 30 percent, which is the highest of all of the players that will be in Hilton on Saturday.

By the way, in looking at Iowa State’s 3-point shooting, who had Dustin Hogue and Niang as the expected leaders in shooting percentage up over 48 percent?

After the game at West Virginia, I told my brother that the rematch in Hilton could be a game where Iowa State wins by 20. The turnovers would likely be reduced and they’d get a lot more fouls called in their favor. West Virginia has also struggled on the road against Big 12 teams that aren’t in the bottom of the league. Oklahoma routed them and Texas crushed them.

Since Monday’s loss in Norman, Cyclone fans have seemingly been a bit down on the prospects of their team’s success going forward and the defense that they’ve been playing, especially on the road. This game isn’t on the road but it is an opportunity to get back on track.

The Cyclone defense will have to deal with Devin Williams down low as well while finding Paige and Carter at the arc. And once again, they’ve got to get the rebounds to complete the defensive stops.

I like Iowa State in this one by seven to 10 points.