The Texas Longhorns have been the disappointment of the Big 12 this season. Loaded with elite talent and expectations to match, they have stumbled to a 6-7 record in the Big 12 after an 11-2 start where many games were played without Isaiah Taylor. 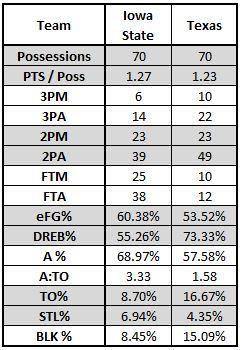 setbacks along the way. Yet, they are still in the hunt mathematically and quasi-realistically.

The last time out, Iowa State dominated for the first 35 minutes including what was likely one of the best defensive performances from an Iowa State team…until the final five minutes when Texas couldn’t miss and a huge lead was whittled down to a close game that got way too tense.

Iowa State held the shooting advantage inside the arc without settling much for the 3-ball while carving up the Longhorn zone. The 60.4 percent effective field goal percentage the Cyclones logged is the worst that Texas has allowed all season. The Cyclones did struggle a little bit in the crucial rebounding apartment only grabbing 55 percent of available defensive rebounds.

The Cyclones shot a whopping 38 free throws aided by Texas going to “hack-a-Clone” down the stretch but ISU only made 25 of them Certainly not awful but they could have done a bit better than 66 percent.

When the Longhorns have the ball…

The Texas offense has struggled to find its groove and consistency this season. They’re fifth in scoring efficiency in league play at 1.02 points per possession and they’re playing at a pretty slow pace of just under 63 possessions per 40 minutes.

They’re struggling to shoot the ball and they turn it over more than Rick Barnes would like, but they have found success on the offensive glass by grabbing over 35 percent of available offensive 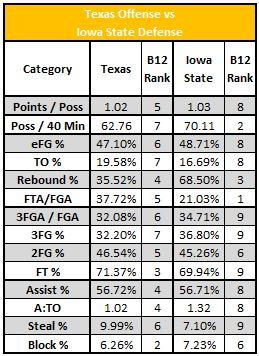 The Cyclone defense has been steadily improving much of the last month or so with just a few slips back in games on the road at Kansas and at Oklahoma. But the scoring rate is improving and they have been rebounding the ball pretty well.

Perhaps one of the biggest surprises in Big 12 play has been how mediocre the Texas defense has been allowing right at one point per possession in conference games. That is just sixth best in the league but the Big 12 does have a bunch of good defenses as KenPom.com rates the Texas defense with the 24th best adjusted scoring defense.

The Cyclone offense is pacing the Big 12 scoring 1.11 points per possession and playing at the 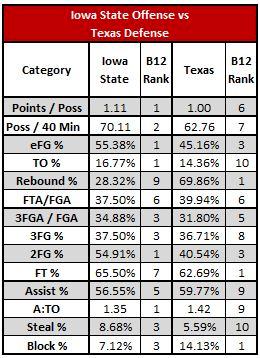 The Cyclones do it with the best shooting in the league and by rarely turning the ball over. As a team, the Cyclones are up near 35 percent from behind the 3-point line but they’re also the most efficient shooting team inside the arc at near 55 percent.

The strength of the Texas defense has been its rebounding and ability to contest shots inside the arc to limit opponent shooting accuracy. They don’t force many turnovers and they aren’t the type of defense that can sometimes cause ISU fits that forces teams out of the offense with lower assist rates.

Myles Turner has really been coming on in league play and has developed into one of their most vital players. His mid-range game is tough to handle and Jameel McKay will have to play a good defensive game on him for ISU to have a chance.

Isaiah Taylor at the point guard was the straw that stirred the comeback drink in Ames, as he was able to get to the paint when the Cyclone help defense was clinging to shooters to provide so much open space. Taylor is tough when he gets into the lane with his 10-foot floater, though he isn’t a great perimeter shooter and he can be turnover prone. He’s a tough matchup for Monte Morris but has to be played where you’re inviting him to shoot and not offering up lanes for penetration.

Jonathon Holmes is one of the more difficult guys to guard in the league when he shows up and when his shot is falling. In non-conference play, he shot over 40 percent from beyond the 3-point line but in league play he’s down around 26 percent. He cannot be allowed to get going. Dustin Hogue will likely draw this matchup and he’ll have to contest on the perimeter and not lose sight of him inside.

Javan Felix has been their most consistent 3-point shooter up at 46 percent and he always seems to be hitting against Iowa State. If ISU can keep his shooting contained that will put a big dent in the Longhorns ability to make shots from the outside.

Cameron Ridley is the monster in the middle that Georges Niang will have to deal with and his primary focus will be keeping him off the offensive glass. Ridley and Holmes are the two guys that really crush defenses in that area with some help from Turner.

It is hard to bet against the Cyclones right now with the last two performances they have put together and how everything appears to be starting to click. Roles finally seem defined and the little things are being done on defense more consistently than they have been in the past.

ISU stifled Texas for most of the first meeting until they went scramble mode and switched the game plan to allowing Taylor to attack and create. Iowa State will have to keep him out of the paint.

The Cyclones cannot let Texas’ 3-point shooting find its rhythm but the biggest key is keeping Texas away from offensive rebounds.

The Cyclone offense carved up the Texas zone last time with Niang in the middle and hitting some 3-point shots on the weak side and finding cutters on the baseline. Lobs to Mckay and Hogue were plentiful. They’ll have to be patient as they attack but also hit a couple of shots from the outside to keep the Longhorn defense spread way out.

With a desperate Texas team on their hands, I think the Longhorns will win a nip and tuck game at home but I would be far less than shocked if Iowa State left Austin with a win for the first time since 2005.