So, big game in Lawrence tonight? 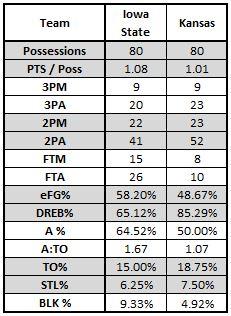 matchup that will go a long way in deciding how likely Kansas is to win yet another Big 12 Championship. The Jayhawks will take the court with an 18-3 overall record and a Big 12 best, 7-1 mark in conference play.

The rematch report is off to the side showing how the last game was decided. A lot of things were equal across the board but Iowa State had the edge at the free throw line and won the turnover battle en route to the victory. It was a game where most of the night felt like Iowa State outplayed Kansas by 8-12 points but that margin didn’t last on the scoreboard.

The biggest takeaway to Iowa State’s success in that game was likely the number of points scored in the transition game for Iowa State. While some of that may be replicated again, it is hard to imagine that Iowa State would be able to score four to six times so quickly after a made Kansas shot.

When the Jayhawks have the ball…

Honestly, the Kansas offense seems a bit underrated. They’re scoring at 1.09 points per possession in conference games and they are shooting the ball exceedingly well. A lot of the components of their 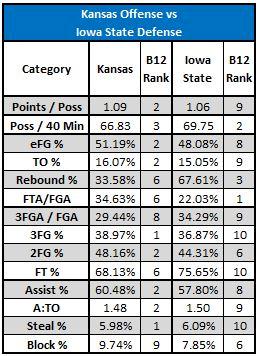 offense mirror the same things that Iowa State excels at, only they seem reluctant to launch many 3-point shots. As a team in league play they are shooting nearly 39 percent from beyond the arc but they are just eighth in 3-point attempt frequency.

Unlike many Big 12 teams, they aren’t an elite offensive rebounding team and they haven’t been getting to the free throw line very often.

The ISU rebounding percentage was once league leading but has since slipped while struggling with some really strong offensive rebounding teams. Through all of that, ISU has done an okay job with their 2-point field goal percentage defense which may be one of the more important aspects of a defense.

The Iowa State offense is also really good. The Cyclones lead the league in scoring and they’re the best shooting team in the Big 12. The 3-point percentage has been pretty solid but they’re also 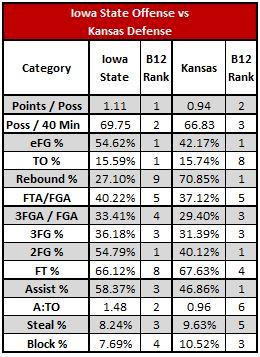 leading the league in shooting accuracy from inside the arc.

The Jayhawk defense is always a stern test and this year is no different with the second best scoring defense in the league. They have the best defense in terms of opponent shooting accuracy inside the arc but also the best defensive effective field goal percentage.

They don’t force many turnovers but they are leading the way in rebounding percentage as they rarely allow opponents to get a second chance at a bucket.

The other point with the Kansas defense worth highlighting is the low assist rate of their opponents. That is similar to ISU’s last opponent, TCU, in that it shows a defense that usually forces their opponents out of the comforts of their offense.

Kansas is one of the rare opponents on these player ratings where the red and blue seems to be equally distributed between Iowa State players an the opponent. Frank Mason and Perry Ellis have carried most of the scoring load for the Jayhawks with Kelly Oubre and Cliff Alexander also offering major contributions.

Brannen Greene is the biggest KU sniper from the outside though his playing time is hit and miss, but usually hit in league play. Selden and Mason are the next two biggest threats though they don’t sit and launch the 3-ball all that often.

Inside the arc, it is Ellis and Alexander doing most of the damage but they get a lot of help from the guards as well. Ellis, Oubre, and Alexander provide most of the rebounding force for the Jayhawks while Mason and Selden are the primary creators. Devonte’ Graham also can do some damage creating for teammates when he gets on to the court.

It seemed for the vast majority of the first game that the Cyclones outplayed the Jayhawks by a decent amount and a lot of that was fueled by the transition opportunities and Georges Niang playing very well. I mentioned earlier that I didn’t think the transition opportunities would be as available this time around and that will be a key area for Iowa State to compensate for somewhere else.

Anymore, Iowa State fans should just assume that they’ll get Perry Ellis at his best and balancing the lineups to defend him and Alexander will be a crucial part of the game. Whichever of the two gets things going will likely draw Jameel McKay to try and slow them down but that is especially true for Ellis. Niang can stick with Alexander to an extent so long as he avoids foul trouble and gets help from doubles and breaks here and there guarding Landen Lucas who isn’t a great scoring threat.

Niang will have to have a big game and I don’t think Kansas has anyone to guard him. Some have mentioned the possibility of Oubre but that would end in a Niang is on the block every single time. Iowa State posted Bryce Dejean-Jones almost every time that Oubre guarded him so I’m sure they’d do the same with Niang.

In the past few games, Monte Morris has done a great job creating but also getting to the rim and scoring. He’ll have that weight on his shoulders in Lawrence tonight. Get into the paint off the bounce and then make the right decision on a pass or attacking the rim.

Naz Long getting hot outside the arc would be a big benefit but I think a second or third 3-point option would need to crop up. That could be Niang, who has been hitting on 44 percent of his 3-point shots in league play, or an Abdel Nader or Matt Thomas.

Iowa State will need to stay calm. Kansas is going to make some runs but I’ve said before and will say again that playing in Phog Allen Field House is like sinking in quick sand. The more you kick and flail, the faster you sink to your demise. Crap is going to happen but ISU has to play through it and keep working for the good shots. But they must capitalize on the opportunities they create. Finish at the rim and remove the silly mistakes.

Kansas is one of the few teams that doesn’t attempt to slow the game down against Iowa State but they instead seem to go with the flow of the game. Since 2013, there have been seven matchups between these two teams; one game had 74 possessions, two games had 75 possessions, and the other four had at least 79 possessions. So I don’t think tempo will be a major sticking point.

After two consecutive wins over Kansas, I think the Cyclones will have the full attention from the Kansas Jayhawks, that, and they know if they beat ISU that the coast is getting pretty clear on their path to a conference title.

Iowa State is capable of winning in Lawrence but they will need to play very well and make smart decisions the entire night. If Iowa State shoots the ball well and can hang tough on the defensive glass and avoid turnovers then they’ll have a chance to win. That said, they’ll still need to hit some shots but also really defend well. That means crisp rotations, contested shots, and finishing defensive possessions with rebounds.

In the end, I think KU wins a game where Iowa State has some success on offense but not enough on the defensive end. As these games have gone the last few years, I expect it to be very entertaining with Kansas pulling away for a five to eight point win.