That’s the message that ESPN analysts and co-hosts of College GameDay, Seth Greenberg and Jay Williams, each delivered during a Friday afternoon media session to preface Saturday morning’s festivities.

And don’t bring up Hoiberg going to the NBA to his former Chicago Bulls teammate, Williams.

“I think Fred Hoiberg will be successful wherever he decides to coach,” Williams said. “He is that brilliant of a mind. He has the contacts. He has the best attribute of all for a coach. He gets people to buy into him. People invest in Fred Hoiberg and what he is trying to build.”

“I don’t particularly see him going to the next level,” Williams said. “When you go to the next level you deal with a lot more than just coaching. You deal with upper management. Obviously you have a little bit of that to do with here with the AD but it’s a different scenario with the owner, the GM and unless you go to a great team that has strong leadership, the players run the league. Here, Fred Hoiberg is able to run Iowa State the way he wants to run Iowa State. As long as he continues to progress and keep challenging players and keep doing well, Fred Hoiberg will be here for a very long time.”

The Cyclones opened as four-point favorites for Saturday’s 8 p.m. tip vs. Kansas (ESPN) but according to Greenberg, it is a game that goes well beyond being important within the blueprint of the Big 12.

“Kansas is the program in the Big 12 that everyone else is measured against,” Greenberg said. “Now all of the sudden you have this Iowa State team where over the last three years, has been able to be able to compete at that level and isn’t going anywhere. They are going to continue to compete at that level. It becomes one of the premier games in the landscape of college basketball not just in the Big 12 but across the board. This is a big time game.”

It’s a big time game with a big time feel surrounding it. As of Thursday morning, students had already begun camping to get the best seat in the house for College GameDay, ESPN’s flagship pregame show that will begin on ESPNU at 9 a.m. At 10, the show will move over to ESPN for an hour on the mothership. At 7 p.m., there will be an hour pregame show live from Hilton.

Analysts excited to finally be in Ames

While Hilton Coliseum is widely known as one of the top arenas in college basketball when it comes to atmosphere, Iowa State hasn’t had the success to bring GameDay to Ames since the program began touring back in 2005.

That’s part of the lore of bringing GameDay to Ames for the ESPN guys. Iowa State fans appreciate the attention, the analysts sense that and they are excited to experience the "magic" in person.

“Hilton Magic is real,” Greenberg said. “What Johnny Orr created with the ‘Here’s Johnny’ and the ownership and the passion, that’s real. To me, that’s what’s exciting. In my new role with what I do now, to be able to come here and experience it and after the game not be able to only eat but taste my food is a really good thing. I am excited about the environment. This is what college basketball is all about. Two great teams. Passion. Ownership. It’s a game that really means something where actually two teams are probably going to make shots.” 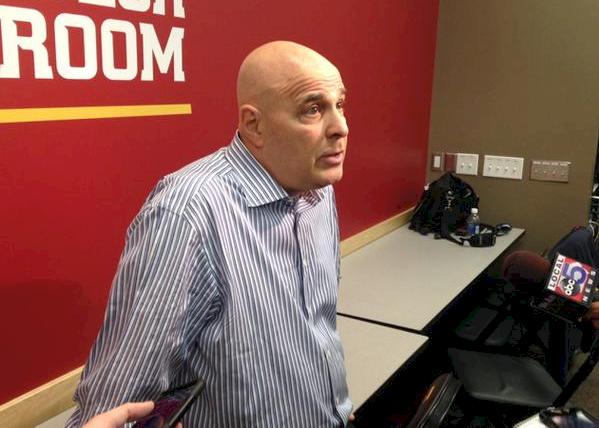 Above: Seth Greenberg chats with the local media

Williams has actually played a game in Hilton Coliseum. Back in 1999, a 17-year old blue-chipper laced up his sneakers as Ames played host to the McDonald’s All American Game.

"That was when Kirk Hinrich and Nick Collison were the fan favorites of Ames," Williams said.

Williams got a taste of Ames that day but saw nothing like what he’s seen from Iowa State fans on social media over the last week.

"I’ve seen relentless people who tweet at me constantly. I tweeted something about the magic of Hilton Coliseum and had 500-600 responses in like a minute," Williams said. "If it’s not crazy, I’m going to be severely disappointed. How about that?"

Much love for Hickory Park

Back in October, Greenberg was in town learning more about the Cyclones. Hoiberg took Greenberg out to lunch.

Only it wasn’t the barbecue that left an impression on Greenberg.

“The greatest thing about going to Hickory Park with Coach Hoiberg is that I was the only person who called him Coach Hoiberg,” Greenberg joked. “Everybody else called him Fred. It’s the funniest thing in the world. A couple of old guys called him Freddy. Maybe they were his little league coach or something. He might be the only coach in America coaching in his own hometown where he is like Freddy from the hood. He is just like, ‘Little Freddy is coaching our team. He played for Johnny and crazy Tim Floyd. It’s so cool and he’s so comfortable with it. Very rare do we have people in our business that don’t take themselves too seriously. He is so comfortable doing what he does and he is so good at it.”