They hit pause and talked.

They pressed rewind. They fast-forwarded.

When ESPN analyst Jay Williams and ISU coach Fred Hoiberg were teammates in 2002-03 with the Chicago Bulls, they formed a tight bond in the film room.

The coaching and teaching never stopped and Williams, then a 21-year-old rookie, was impressed.

“It was a little bit chaotic that year,” Williams, a two-time all-American at Duke, said in a teleconference today. “We didn’t win too many games, but Fred and I would always watch tape together. Fred and I would always spend a ton of time together in practice. He actually had a brilliant coaching mind. And I always used to think, when I was 21, ‘Fred’s going to be an amazing coach some day.’”

Obviously, Williams — whose NBA career was cut short by a horrific motorcycle accident — was on to something. The former teammates will again share the same floor Saturday, but from different angles. Williams will be on set as ESPN College GameDay broadcasts from Hilton Coliseum for the first time, beginning at 9 a.m.

Hoiberg will be on the sidelines, of course, trying to coach his 11th-ranked Cyclones to a second straight win — but first in the regular season since 2013 — over No. 8 Kansas.

“It’s an unbelievable opportunity for us to showcase our program and to showcase our university and we’re excited about that,” said Hoiberg, whose team faces No. 22 Baylor at 8 p.m. tonight in Waco.

Williams described his excitement for Saturday as two-pronged. 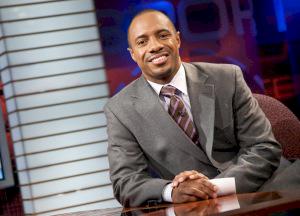 One, it’s ISU-KU — and it’s at what promises to be a decibel-raising Hilton.

“The best part about doing GameDay has been that I’ve been in studio since I want to say, 2005, 2006, so there’s a certain feeling that you get when you’re in studio and you’re listening to the sounds of the game,” Williams said. “I’ve heard the magic of Hilton Coliseum so many times — have this roar in my ear that I can only imagine how it’s actually going to be to be on the court, to be in that atmosphere.”

Two, he’ll reunite with Hoiberg, who demonstrated an unusually keen understanding of all elements of the triangle offense as a player.

“And he would also understand the power points of the set,” Williams said. “And what I mean by that is we had a very young basketball team so he would work with me on who to give the ball to at what juncture of the game. We had Tyson Chandler and Eddy Curry and we would talk through timeouts and if Eddy had just scored multiple possessions, (Hoiberg would say), ‘We should try to go back to him,’ or, ‘Here’s an idea: When you come off the dribble hand-off on the wing…’ Just, that understanding of the game, I’ve never heard a player talk to me like that. I’ve heard coaches talk to me like that, obviously coming from a Hall of Fame (Duke) coach in Coach K (Mike Kryzyzewski) and doing USA Basketball and working with (Villanova coach) Jay Wright and guys like that. But I’ve never heard a player tell me how to execute the game like Fred was able to do. it was something that always stood out in the back of my mind.”

It will likely stand out again on Saturday night — as will the Cyclones’ rabid fans, from early morning to late into the night.

MORRIS MUSINGS: How much has Cyclone point guard Monte Morris cemented his stats as an elite point guard? Here’s what Williams, a former national player of the year, had to say about the NCAA single-season record holder in assist-to-turnover ratio: "I’m really excited to see (him) up close and personal."