Warmly-dressed media members were led on a tour of the site Tuesday afternoon and the project remains on schedule, Iowa State’s senior associate athletics director for facilities, planning and management Chris Jorgensen said. Several workers hammered away as the winds whipped and temperatures hovered around 25 degrees.

“We’ve got our fingers crossed that we’ll have weather that cooperates with us this winter,” Jorgensen said.

Construction is expected to be finished before the start of the 2015 season and will push the stadium’s capacity to about 61,000.

Frank Nogel, ISU’s senior associate athletics director for external relations, said about 900 of the 3,000 club seats the project will produce have already been sold and another rough season (the Cyclones are 2-7 overall, 0-6 in the Big 12) hasn’t slowed sales.

“It’s been pretty steady to be honest with you,” Nogel said. “Since last Thursday, I got a report yesterday morning that we had sold about 60 seats, so I think fans, they know we’re in it for the long-term. I think they want to be part of something bigger and they want to be part of the excitement of the new stadium. So, obviously, we’d like to win more games as everybody would, but I don’t see that affecting our sales right now."

Jorgensen and representatives of the Weitz Company, the construction firm managing the $60 million expansion, led the tour. Jorgensen also provided insight into changes spectators will see over the final two home games of 2014.

“For the final two games of the year, we had planned even prior to the construction starting that people that bought tickets for the (south) hillsides would be relocated to the north hillside seating,” Jorgensen said. “We’ll have plenty of capacity on the north hillsides and if we would happen to run out of space on the hillsides we would relocate them into sections “F” or “R.”

Jorgensen said emails would be sent to affected hillside season ticket holders late Tuesday or shortly thereafter. The south end zone bleachers will remain in use, but entry points on that end of the stadium will be closed.

Nogel said end zone club season ticket holders will have access to an array of amenities. To be able to purchase club seats for $750 per person each season, an annual Cyclone Club donation of $500 or more is required.

“You’ll have a chair back seat with a cup holder, a full-service cash bar, there’ll be a la carte food stations, private restrooms, it will be heated and air conditioned, wifi and obviously tons of flat-screen TV monitors in there, so it will be a great place to be on game day,” Nogel said. “You can be inside or outside on two levels.” 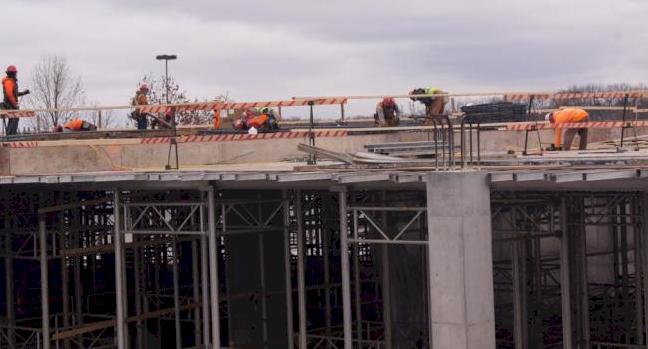 The club area is expected to be completely enclosed by the end of April, project manager Ben Bunge of the Weitz Company said. “Currently the club section’s going up,” Bruge said. “The elevated pan deck will pour out by Christmas or just after the new year. Then on the hillsides we can expect to see steel getting set out there on January 9. We’ll start to see steel going up and all the columns and foundations will be up at that point." 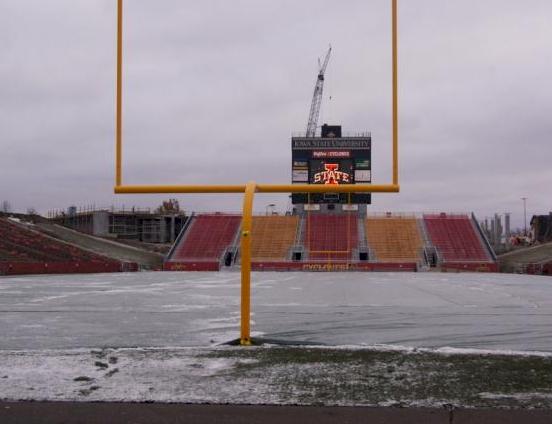