*** I don’t have a vast overview from Iowa State’s 59-14 loss to Oklahoma for you this morning. I described what I saw in that massacre shortly after the game. I do however have thoughts on a few specifics.

When you lose by that many points, it is hard to nitpick on specific possessions or plays but after re-watching the game on Sunday morning (I am a masochist), but I can’t get over the play calling after Iowa State’s depleted defense miraculously stopped Oklahoma on 4th and 1 early in the second quarter. The Cyclones had just scored before that. The stop itself was a minor miracle.

Normally, you’d see an immense underdog with nothing to lose (at home) try to capitalize on the situation. But Iowa State ran two plays into the teeth of Oklahoma’s hulk-like defensive line, was stuffed, and then threw an incomplete pass on 3rd and 10.

That is the definition of playing “not to lose." At that time, a desperate Iowa State team should have been grasping at the opportunity to seize critical momentum in a game that it probably wasn’t going to win anyway.

Iowa State fans fell in love with Paul Rhoads football teams early on in his tenure because of the unconventional ways. Surprise onside kicks were a thing of the norm. Trickery happened all of the time.

I’m not calling for Iowa State to run the Statue of Liberty five times a game but that possession really bothered me. Losing is losing but go out fighting.

*** Speaking of trickery, I loved the different formation that Iowa State went with in the second quarter that the Cyclones eventually scored its only first half touchdown with.

I did a little research. That’s actually called the “Ninja” Formation. I don’t have a photo from Iowa State running it but here’s a look from UCLA running it earlier this season. 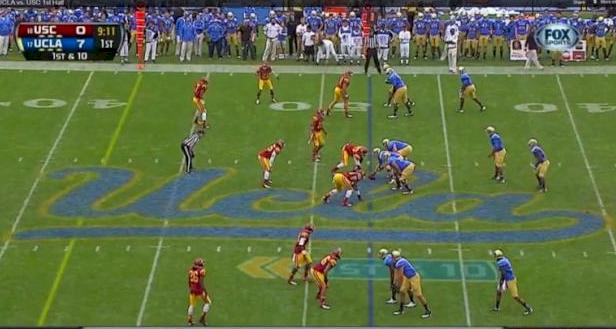 Iowa State scored its only touchdown of the first down on the drive that it ran the “Ninja.”

Am I saying to run this “Ninja” all day, every day.

But obviously Iowa State doesn’t have the talent to line up and go pound-for-pound in the Big 12. Over 100 years of football in Ames have proven this time and time again.

So why not run more gimmick offense from time-to-time?

Who cares about pride? Just win.

This, to me, was progress.

*** Jack Whitver & I fielded a lot of calls about Iowa State’s non-existent rush defense after the game and rightfully so. The Cyclones were gashed for 510 rushing yards by the Sooners.

How did it get that bad?

Lots of reasons, of course, but if you count Brandon Jensen (who barely played on Saturday), Iowa State’s top five defensive tackles from the beginning of spring ball (Rodney Coe, David Irving, Jensen, Robby Garcia and Devlyn Cousin) were not on the field. Toss in Austin Krick, who decided to not come back for his senior season, and that’s the top six. Krick never suited up in the spring. He quit in December of 2013.

Again, lots of reasons but that’s clearly a big one.

Remember the names Quinton Pompey and Collin Bevins? They gone too.

*** If I knew that Jevohn Miller and Nigel Tribune were going to play for sure (which I don’t), I’d predict a significant Iowa State victory over Kansas for Saturday’s 2:30 kick on Fox Sports Net. If you hadn’t heard, Iowa State is a four-point road favorite. Problem is, Miller is out for the season and I’m just not sure about Tribune’s status this early in the week.

If Iowa State fields the same defense (minus Jensen too) that it did last week, it could very well lose to the Jayhawks. However, the offense should score at will against KU’s 98th ranked scoring defense. I know that Iowa State isn’t very good – but Kansas is atrocious. Plus, you think Mark Mangino won’t pull out all of the stops on Saturday against his old school?

*** I truly believe that Paul Rhoads will be Iowa State’s head coach next season but he’s beginning to enter a bit of a danger zone. Fans hold a lot of power by choosing to fill up seats. Jack Trice Stadium was pretty flat on Saturday (rightfully so) and I can’t imagine the final two home, cold weather games being much better.

*** Why does the media undervalue Kansas State every single year? You’d think that eventually, we’d learn. But we never do. We never do.

*** My guess is that Bill Fennelly suspended Nikki Moody as more of a preseason, get your attitude right type of warning shot than anything last Friday. The women’s basketball team will open up its two-game exhibition season on Tuesday vs. William Penn.

*** Our intern Jared Stansbury will serve as our Iowa State women’s basketball beat writer this season. Ian Smith, who has worked with us since 2009, will also pitch in from time to time. Of course, Rob Gray and I will be around too. My goal here was to increase our coverage of Fennelly’s program for the 2014-15 season. In the past, we have covered games exclusively but now, Jared will be on the ground in Ames during the week for consistent reports on the program.

*** I will be recording two podcasts later today with assistant coaches from Iowa State’s two basketball programs. On Tuesday, I’ll go one-on-one with Billy Fennelly for a last look at the women’s program before it tips off Tuesday night. On Wednesday, I will sit down with Matt Abdelmassih for a final look at the men before Friday’s opener.