As an Iowa State football fan, there is one mantra that you are familiar with that applies to the last 15 to 20 years (and probably longer than that) that we all know and hear constantly. Sometimes we forget it with our passion fueled nuclear rage that decimates most of Story County after a 59-14 thumping, but deep down we all know it to be true.

Iowa State football has a very thin margin for error.

There are just a few high level inputs that go into the equation for success at Iowa State; depth, schedule, and winning the close games. Depth is an issue that we can anecdotally speak intelligently about as it is affected by injury in recent years but almost impossible to compare year by year in the history of Cyclone Football. Hence, I’ll pretty much ignore it even though you, I, and your dog know that ISU has had some bad luck in their last 20 games.

I’ve had the inkling for a while that Iowa State’s success is very closely tied to their schedule difficulty and ability to win the close games, but today I’ll finally quantify it as best as I can. I went back in time 30 years and started crunching some numbers (the partial 2014 season is excluded). I didn’t go farther because I was trying to keep the comparisons of different eras relevant.

It is the epitome of obvious but worth flushing out, in my opinion. I do think it is more relevant for Iowa State, though. In part because they so rarely blow out an opponent which only adds to the need to win the games that fall into the "close" category.

For strength of schedule, the easiest and close to best way I have is to simply get a percentage of opponents that were ranked value. It’s a bit high level and leaves some detail to be desired but I think it gives a pretty accurate and general feel for how tough the slate of games really was in a given year.

For close games I tabulated the wins and losses by season in games that were decided by eight points or less, one possession. Again, this isn’t fool proof when you consider how a late meaningless score can affect the overall picture, but by and large it gives us a pretty decent snapshot relatively quickly.

Let’s find out if I’m right (for once) in thinking that ISU’s success is hinged to their schedule and winning the close games (The easier schedules and the higher close game winning percentage have the “better” ranking). 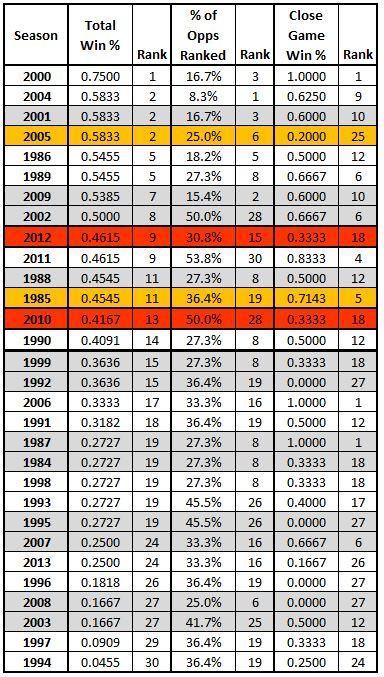 Now the question is, where do those seasons overlap?

What does that tell you? It tells me that against some of the toughest schedules that the Cyclones have seen in the past 30 years there has been just four times where ISU won 40 percent or more of their games and Paul Rhoads was the coach three of those times.

In the three seasons where a Cyclone team won 40 percent of their total games while winning less than half of the close games in that year, Paul Rhoads has two of them.

The counter-point that some and especially the Rhoads detractors would make is that coaching should win more of those close games for their team. That’s a fair point, but we should also consider the fact that in 2011, Iowa State went 5-1 in games decided by eight points or less.

In his time at Iowa State, Rhoads has a total record of 12-14 in games decided by eight points or less. The expectation in those games is probably to win half and anything better is a bonus of sorts. In terms of ISU history, only Earle Bruce, Johnny Majors, and Jim Criner (!!) have a record of .500 or better in games decided by eight or less. So Rhoads is two games off of “par” and near the top of Cyclone coaches in the program’s history.

This is not a vote of confidence; it is a statement of facts.

Depth is in part a matter that can be controlled by the coach in recruiting and development but can be hurt drastically by injuries, suspensions, and other attrition. The schedule is what it is. Close games are hoped to be won at least half of the time.

Those are the three high level inputs that go into successful Cyclone football seasons and the program has direct control over about one and a half of them. More often than not for Iowa State to have a winning season they need the help of an easier schedule and capitalizing by winning the close games when they can. Those statements are true everywhere but especially so in Ames.

In the face of difficult schedules and coming up short in close games, Paul Rhoads has gone against the grain of ISU history and had as much or more success than his predecessors. Over the past 15 years, times have changed with the Iowa State football program as have their expectations and I completely understand that.

The older fans that have been around the block and remember the bad times are starting to raise the bar of expectations because they know it can be done, at least in spots, and they don’t want to go back to the cellar from the past. The young crowd didn’t see the pitiful program that was through most of the 80s and 90s and have no reason to check their expectations. The demand for better is ever increasing and ever louder.

Expect more. Demand it. But ignore the comparative success of Paul Rhoads to all of his peers that coached before him in Ames? Not me. Not yet.