It wasn’t Baylor dropping a 70 spot on some poor soul, or UCLA breaking the scoreboard en route to 60 plus points, or Oklahoma trying to enhance what used to be their playoff resume with a blowout win. But that Iowa State offense that we saw on Saturday is one of the better performances I’ve seen from the Cyclones in my time.

There was the 52 point outburst in Morgantown last year aided by three overtimes. They dropped 51 on Kansas in 2012, one of the worst defenses they faced. In 2011, the Cyclones eviscerated Texas Tech on the ground as they piled up 41 points that could’ve been much more before taking the foot off the gas. The year before, Austen Arnaud had a career day and led ISU’s offense to 45 points plus another seven on an onside kick return. (Oddly enough, all of those games except for the 2010 win over Texas Tech came on the road.)

But, in the Rhoads era that is essentially the list of outstanding offensive performances in the points scored compartment.

But how good was the Cyclone performance led by Sam Richardson, Aaron Wimberley, E.J. Bibbs, and Allen Lazard at the direction of Mark Mangino?

Let’s take a look and find out by comparing some key metrics from other Texas games this year, often times against some of the better offenses in the country. Oklahoma, Baylor, BYU, and UCLA have all squared off with this Longhorn defense, how did they compare to Iowa State? 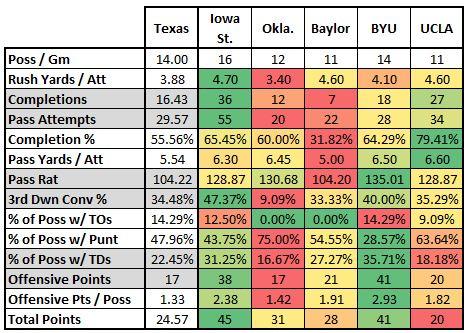 The Cyclones didn’t win every category in the group of five, but they won most or came in just behind the UCLA or BYU efforts. The averages for the Texas defense are in the first column and include data from every game they’ve played this season. There isn’t a single category that the Cyclones did not outperform the average.

The yards per carry and completion percentage (as well as the sheer number of attempts) jumped out at me the most. Sam’s passer rating was dinged a bit by his two interceptions but it is still smack in the middle and far above the Texas average.

Comparing ISU to the two most recent opponents for Texas in Oklahoma and Baylor and the numbers are pretty mind-numbing.

Most importantly though, the Cyclones scored a great clip of 2.38 points per possession for the offense, that doesn’t include the defensive touchdown and is the second best outing of this bunch of data samples.

The Cyclone offense on the whole isn’t better than many or even any of these other teams here but they definitely out-performed most in the one game sample size. That alone should give some hope and faith that this Cyclone offense is on the right track.

Continuing the success will be the biggest key to the future success of this season; that and the defensive output to match that has been more customary than what we saw in Austin on Saturday.