If I had any bit of creativity or wit to spread I’d totally make this a spooky edition of picks on Halloween 2014. But, as we all know, I do not. Plus, it’s late on a Thursday night and Louisville just flamed out against Florida State like Blum did with his picks last week.

Jeff Woody is still proving he’s smarter than he looks while rounding out the top of the leader board, much to the dismay of Adam Gray’s ego. Things got a bit feisty for some on the weekly email and I bet you can’t guess who was bringing the most heat…but, I think it’s best to not out him just yet.

Below are the current standings. By the way, if you only read one man’s picks this week make it Blum’s. That guy is great…I told him he gets six wins already just for doing what I could not with the whole Halloween edition of picks. 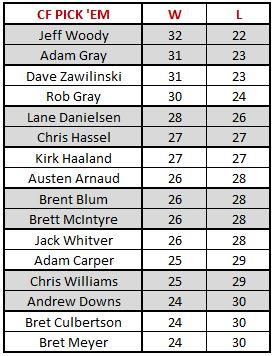 Auburn @ Ole Miss (-2.5) – This should be a good game, and because of that, I think home field plays an advantage. I do recognize that there’s a possibility that Ole Miss falls off the wagon to finish the season, since Ole Miss tends to do that sort of thing historically. That being said, I’ll take the Rebs. It’s just too physical of a defense for Auburn to match up against.

Stanford @ Oregon (-9.5) – The Ducks have looked significantly better than everyone else in the Pac-12, including Stanford. I don’t think the Cardinal can score with the fighting Mariotas. Fly, Ducks, fly.

Oklahoma State @ Kansas State (-14) – Again, until JW Walsh comes back for the Cowboys, they can’t score with the best in the Big XII. I’ll take K State inside Bill Snyder Family Stadium going away. This Wildcat team is for real.

TCU (-6) @ West Virginia – This is the trickiest game of the week to me. Just like we all predicted before the season, Clint Trickett vs Trevone Boykin is a battle of two of the best players in the conference. After TCUs thorough ass-kicking of Texas Tech and West Virginia’s win against Ok State, I’m convinced. These teams are legit. My gut tells me to ride with the Mountaineers because it’s in Morgantown. I think TCU wins either way, but I think WVU covers. Tough line to pick.

Oklahoma (-16) @ Iowa State – I’ll take the Cyclones to cover in this one. I think the Sooners are good, but actually not that much better than Iowa State. What worries me is if they can establish a full-throat running game. That would lead to a fatigued defense, and a shootout begins again. I think ISU’s chance to win comes in turnovers. OU is capable of giving them up. ISU just has to keep the ball when they’re on offense and capitalize on the Sooner mistakes.

I used my own KenPom like rating system to come up with this.

Oklahoma State @ Kansas State (-14) – I don’t see this game being close, but I like OSU to get a backdoor cover.

Stanford @ Oregon (-9.5) – This isn’t the same Cardinal team that upset the ducks in years past. Oregon.

Stanford @ Oregon (-9.5) – Oregon’s not shaking off the effects of recent meetings that easily. SHOCKER. Stanford 31, Oregon 30.

Stanford @ Oregon (-9.5) – Stanford. I have faith that Stanford’s physical, disciplined play will show upthis Saturday and cover 9.5 on the road.

Oklahoma State @ Kansas State (-14) – Okie State. I think the Cowboys show and play here and keep it to a TD game.

TCU (-6) @ West Virginia – TCU. I like the Horned Frogs on the road with physical tough play.

Oklahoma (-16) @ Iowa State – Oklahoma. The Sooners are to much for us this Saturday.

Stanford @ Oregon (-9.5) – Oregon. Ducks want to impress the voters and the Trees just aren’t that good this season.

TCU (-6) @ West Virginia – WVU. The Mountaineers are another team I’ve been slow to trust. I smell smoldering couches in Morgantown.

Kansas @ Baylor (-36) – I mean, what the hell is this Willliams? Who thought picking this game would be a good idea or fun? Normally I’d roll with Kansas but I’m a bit scared that Baylor my cover by halftime. So, Bears.

Oklahoma State @ Kansas State (-14) – I am currently gambling on Old Man Wizard until it doesn’t work for me. K-State.

TCU (-6) @ West Virginia – You can never trust a man with two first names or Dana Holgorson. Can they pull another upset in Morgantown? TCU is looking unreal right now but they have to come back to earth a little bit, right? I don’t know, when in doubt go with the home dog.

Oklahoma (-16) @ Iowa State – Before the Texas game I was feeling a little frisky and thinking if ISU played well in Austin maybe that would snowball into a victory over the Sooners. Then the Sooners flamed out against the aforementioned Old Man Wizard in what is completely unrelated but makes me think differently about this. I think ISU will have success moving the ball but I don’t think they’ll be able to stop the run or get the turnovers needed on defense. Another close loss for Rhoads in the past 15 months.

Auburn @ Ole Miss (-2.5) – I like Ole Miss at home, for the simple fact that their defense has a ton of NFL talent. Look for Ole Miss to turn over Gus Malzahn’s offense a few times and get a win in a close one by a FG.

Stanford @ Oregon (-9.5) – Stanford has had Oregon’s number in the past couple of years. This year is different, Stanford doesn’t have the same amount of talent as usual. Mariota gets it done here by at least 10.

Kansas @ Baylor (-36) – This is going to be a blood bath, Baylor scores early and often and starters are on the bench in the 4th.

TCU (-6) @ West Virginia – I like TCU in this one for the simple fact that they hold their own destiny. And if they win out they should be in the four team playoff. Plus, Boykin is one hell of a player

Oklahoma (-16) @ Iowa State – Unfortunately I don’t like where this game falls on Iowa State’s schedule. Iowa State is notorious in the past few years for not being up for 11 AM kickoffs. I think Oklahoma covers the 16 but it’s a closer game than most think.

Doing all of my picks like political attack ads because if you can’t avoid them, might as well embrace them.

Stanford @ Oregon (-9.5) – What kind of institution would have a tree as a mascot? It is time for this tree to leave. Paid for by Ducks fly together PAC. Oregon 37 Stanford 17.

Kansas @ Baylor (-36) – Art Briles will stand up for you. Even when faced with a ridiculously easy game, he isn’t afraid to run up the score. That’s the type of man America needs. Baylor 57 Kansas 14.

Oklahoma State @ Kansas State (-14) – This grainy surveillance footage shows Bill Snyder in line at Taco Bell at one in the morning, missing an important vote for our future. Would you trust a man more concerned with fourth-meal than the fourth generation of our children? Vote Gundy. K-State 31 Oklahoma State 21.

TCU (-6) @ West Virginia – If TCU is willing to punch in a meaningless TD to score 80 points in a game, imagine what they could do to your hard-earned Medicare. If it was up to TCU, they would punch in a different 80-something…our elderly. West Virginia 34 TCU 31.

Oklahoma (-16) @ Iowa State – Bob Stoops wears a visor even when it is raining. His lack of concern for his whole head means he can’t possibly care about the whole of America. Meanwhile, Paul Rhoads wears a full hat like a true American. That’s someone we all can trust. Oklahoma 34 Iowa State 27.

Stanford @ Oregon (-9.5) – Oregon. May not bank their usual number of points, but they’ll shake off Stanford at home.

Kansas @ Baylor (-36) – Kansas. Baylor hasn’t been putting up the huge blowouts this year, I think the Jayhawks can cover this.

TCU (-6) @ West Virginia – TCU. This should be the most entertaining game of the week. TCU covers the one score and creeps closer to the playoffs.

Oklahoma (-16) @ Iowa State – Oklahoma. Picking this one with both teams coming off a bye is especially tough. The Sooners’ frustration, plus history push me their way.

Auburn @ Ole Miss (-2.5) – Ole Miss coming off a tough loss at Death Valley rebounds with a big win over Auburn. Rebels win by 3 to cover.

Stanford @ Oregon (-9.5) – Oregon playing well and playing for a spot in the playoff…Ducks roll at home to cover spread.

Oklahoma State @ Kansas State (-14) – I don’t think KSU is elite, but they continue to win. I’m not going to bet against Bill Synder at home…KSU by 17 to cover.

TCU (-6) @ West Virginia – The best game of the weekend…Game Day on hand in what will be a classic Big 12 shootout. TCU comes up with a HUGE road win by 7 to cover and put themselves in the playoff picture.

Stanford @ Oregon (-9.5) – Although Stanford is down this year, they always play Oregon tough.  Stanford covers.

Kansas @ Baylor (-36) – To keep their playoff hopes alive, Baylor needs to win out convincingly and yes that means covering the crazy 36 point spread this week.  Baylor

Oklahoma (-16) @ Iowa State – Already with 2 losses, the Sooners probably don’t think they have much left to play for in the season.  Cyclones keep the game competitive through the end and cover.

Stanford @ Oregon (-9.5) – Oregon. Stanford has lost to every good team it has played, and they’ve got a good one this week.

Oklahoma State @ Kansas State (-14) – OK State. Wildcats won’t pitch consecutive shutouts. They may win, but this is too many points.

TCU (-6) @ West Virginia – TCU. Really excited for this game, not confident in my pick, but going with the gut.

Auburn @ Ole Miss (-2.5) – Absolutely cannot wait for this game. Ole Miss has been fun to watch, but I think the Tigers find a way to kick them while there down after a loss last week. Gus and crew get it done.

Stanford @ Oregon (-9.5) – I’ll go along with the 2 score spread here. Stanford has had some close ones- I don’t think they can pull this one off either.

Kansas @ Baylor (-36) – Wow. I believe it, but it’s still hard for me to stomache that number. Jayhawks.

Oklahoma (-16) @ Iowa State – Heart breaking loss for Sooner kicker Michael Hunnicutt last week. I’d still consider him one of the best college kickers playing right now. Every kicker has their bad days. This is that moment in his career where we find out if he has the mental makeup to play on Sundays. Netten, on the other hand is on a role. As far as picks go, I can’t go against the Clones!