The humbling has began.

The season started with 16 experts as dubbed by Chris Williams full of confidence and ego with just how well their picks would do. After five weeks only six pickers are above .500 mark. And the grind is starting to wear them (us) out like the Alabama offensive line.

The submissions this week were sent with statements such as:

"I’ve done so bad thus far I’m not going to try and explain my picks anymore!"

"See below for more wrong picks."

"Things have gone poorly enough my reasoning doesn’t really matter. Just the picks until I improve."

We’re not even half way through the season and the meat grinder that is gambling on college football has already won.

But, one man called his pick "#Winners". I’ll tell you next week who, and if he called his shot correctly. 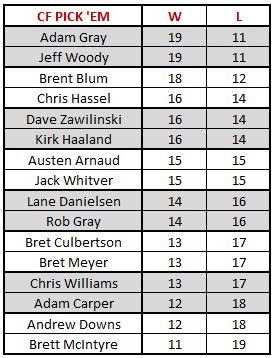 Gray the junior and central Iowa’s newest media darling, Jeff Woody, are tied at the top of the board. Blum is hot on their tails and Mr. Cooter Ray himself is inching ever so close to the top.

Alabama (-6) @ Mississippi – Hugh Freeze has done a great job with Ole Miss.  They still aren’t ready for what Bama has though.  Alabama wins by two scores.

Nebraska @ Michigan State (-8.5) – Michigan State needs a statement game after the missed their opportunity against Oregon.  I think they shut down Nebraska’s running attack and win by 13.

Texas Tech @ Kansas State (-12.5) – I don’t think much of Texas Tech but I do think they are talented enough to compete with Kansas State.  Kansas State doesn’t beat themselves and so they will win, but not cover.  Tech 20 KSU 35.

Oklahoma (-5) @ TCU – TCU always plays Oklahoma tough it seems.  With that said, this is their first game this year where they will be challenged.  I think they hang in there but Oklahoma scores a late TD to win by 10 and cover.

Iowa State @ Oklahoma State (-17) – This line seems a bit too high to me and whenever I feel that way I’m wrong. So, I’m going the other way. I think Oklahoma State plays close to the LOS like Baylor did and Iowa State once again struggles to make them pay for it.  I, unfortunately, like Oklahoma State to cover.  38-17 Cowboys.

LSU @ Auburn (-8) – I am not a big fan of this LSU team, and I think Nick Marshall is one of the best players in the country. I’ll take the fighting Malzahn’s to cover at home. Auburn.

Alabama (-6) @ Mississippi – Whenever Ole Miss is supposed to be good, they tend to play really well early on, get some hype, have some prospects do good things, then get walloped by Bama. I will pick with history here, even though Robert Nkemdiche (D-lineman #5) is really, really, really good. Roll Tide.

Nebraska @ Michigan State (-8.5) – The B1G is hoping soooooooooo badly that this is a competitive game, since these have been two of the only three teams to pass the non-conference eye test in the conference. The line at 8.5 seems high to me because MSU likes to play grind-it-out football, and because Ameer Abdullah. I think this is a classic B1G game, so give me the Huskers and points.

Texas Tech @ Kansas State (-12.5) – Could there be two teams more fundamentally different? Kliff is flash and explosiveness with basically zero discipline, and Snyderball is all about doing the right thing, the right way, and doesn’t care how long it takes. This one starts out close, but I think K-State covers, then runs and hides with it.

Baylor (-16.5) Texas – Texas’s offense is run heavy and they don’t really throw that well. Baylor likes to stack the box as much as they can. Even if the Longhorn’s defense plays well, that only will hold the Bears to 35. I’ll take Baylor winning 35 or more to 10 or less.

Iowa State @ Oklahoma State (-17) – Steele Jantz, err, Daxx Garman is going to make a bunch of "WOW" plays with a bunch of "wow…." plays. Iowa State gets some semblance of a running game going. Sammy plays well. The defense does enough to contain the ‘Boys. Give me the Cyclones! (17 points is really high).

Texas Tech @ Kansas State (-12.5) – Kliff Kingsbury being called the Anna Kournikova of College Football is probably my favorite part of the season so far. I was a fan of her tennis skills. The Kournikovas look good for a half and cover. K-State 31 Texas Tech 21.

Nebraska @ Michigan State (-8.5) – Nebraska is for real. At least that’s what the people in my new home state tell me.

Iowa State @ Oklahoma State (-17) – I was in Stillwater the last time these two teams played and it wasn’t pretty.   OSU.

Seriously, these games all suck to pick.

Nebraska @ Michigan State (-8.5) – Ameer Abdullah versus the Spartan defense. I’ll take MSU because 11 vs 1 should win every time.

Oklahoma (-5) @ TCU – I feel the same way I did a few years ago when ISU basketball was only a three point favorite at Drake. Remember what happened that night? But yeah, I’ll still take the Sooners.

Baylor (-16.5) Texas – Texas kinda has a defense, but I really want Baylor to win by a million after some of the comments I’ve read from the Longhorns this week. A superiority complex never looks good, guys.

Iowa State @ Oklahoma State (-17) – I think ISU will at least hang around and I think they’re capable to be very much in the game. However, I don’t trust the offense and I’m not sure the Cowboy explosiveness can be reigned in all game long.

LSU @ Auburn (-8) – Auburn wins this one but LSU keeps it close. Anybody look at the remainder of Auburn’ schedule? the downfall starts now. LSU covers.

Alabama (-6) @ Mississippi – Bama, Bo Wallace will turn the ball over too much that is his MO.

Nebraska @ Michigan State (-8.5) – Sparty by at least two scores. We’ll see what Tommy Armstrong can do as a passer, because Abdullah will be limited by Mich St defense.

Oklahoma (-5) @ TCU – The most interesting line of the week. I don’t think TCU is going to pull this one off, OU wins by a TD.

Baylor (-16.5) Texas – I picked against Texas last week and was proven wrong. Although they were out-gained by the Jayhawks. I think the Texas defense is pretty damn good. Longhorns cover the 16.5

Iowa State @ Oklahoma State (-17) – The Cyclones cover 17. Wimberley, Nealy, and the OL: time to make some plays in the running game.

Alabama (-6) @ Mississippi – Alabama shows off it’s talent on a big stage, wind by 7 to cover.

Oklahoma (-5) @ TCU – Vegas knows something I don’t as this spread seems pretty low. I have OU to easily cover, winning by 14.

Iowa State @ Oklahoma State (-17) – ISU is improving on both sides of the ball. I’ll take the Cyclones to cover in a high scoring game.

Alabama (-6) @ Mississippi – Alabama.  The Crimson Tide are going to put it on Ole Miss.

Nebraska @ Michigan State (-8.5) – Michigan State.  The Spartans will take away the run game from the Huskers and I don’t think Nebraska can pass the ball enough to be in this game.

Iowa State @ Oklahoma State (-17) – Iowa State.  I don’t think Okie State is that good.  I hope we can at least keep this game close.

Iowa State @ Oklahoma State (-17) – For this one, the realist and sentimentalist peacefully co-exist. Cyclones hang in there behind three TD passes from Sam Richardson. Cowboys 38, Cyclones 28

LSU @ Auburn (-8) – Looking forward to this matchup. LSU hangs with, I’d be fine with a game-winner on either side of the ball. LSU beats the spread.

Alabama (-6) @ Mississippi – Fun Fact: Ole Miss kicker Gary Wunderlich was ejected last week after refs falsely accused him of throwing a punch. I hope the teammate who really threw the punch at least bought him dinner for taking the heat. I’ll take Bama by more than 6.

Iowa State @ Oklahoma State (-17) – After a big loss last week I was still happy to see the points the clones put up vs Baylor. Let’s go D! Clones.

LSU @ Auburn (-8) – Even with LSU starting a true freshman at QB, these are the kind of SEC games that come down to the last drive.  LSU covers.

Alabama (-6) @ Mississippi – Saban has had two weeks to prep for the Rebels…Yeah I’m going with Bama.  Roll Tide!

Nebraska @ Michigan State (-8.5) – These Huskers certainly look better without Taylor Martinez running their offense and being the turnover machine that he was.  Sparty wins outright but NU covers.

Texas Tech @ Kansas State (-12.5) – The pop-culture icon coach does enough to cover against that grumpy old man in Manhattan.

Baylor (-16.5) Texas – Bryce Petty has a field day with an impressive win in Austin.  Bears cover.

Iowa State @ Oklahoma State (-17) – The wins and losses may not indicate it but we’re getting better and improving.  Think we do enough to cover this weekend.