Another week and another round of the self-appointed experts in the land of Cyclone Fanatic making picks that YOU DO NOT WANT TO USE for your own personal wagers. (That cannot be stressed enough.) 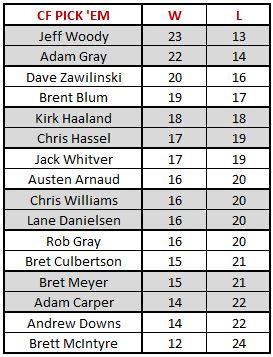 Mr. Woody exploded with a burst up the leaderboard last week – a burst we never saw from him on the football field, I might add – to climb atop the leader board. This caused severe consternation for the always confident Adam Gray as he is now going to any means possible to again lead the way.

The best news of all, of course, is that "Operation Do Not Let Cheating Hassel Win" is starting to take hold and Mr. Cooter has some bodies between him and the top of the standings.

Auburn (-3) @ Mississippi State – Auburn has been impressive, yes, but they struggled on the road against K State. Accurate passing but mobile QB and a solid, fundamentally sound defense. That is exactly what Mississippi State brings to the table. I’ll take the Bulldogs in an upset at home, and Mississippi changes the name of the capital city from Jackson to Dakson.

West Virginia (-6) @ Texas Tech – How bad is Texas Tech this year? Discipline is non-existent, and daddy-long-legs Davis Webb hasn’t been healthy or effective. Give me the ‘Eers to cover.

Texas vs. Oklahoma (-14.5) – This is one hell of a rivalry game. Usually. I think the TCU loss just pissed the Sooners off. Texas’s defense is solid in this game, but the Longhorn offense going 3 & out more often than not will wear them down, and this one gets to be a downright bloodbath by the end of the game. Sooners by eleventy billion.

TCU @ Baylor (-8.5) – TCU has been as impressive as any team in the conference. Baylor has been the team to be measured against. This is a game that people don’t understand the amount of hatred flowing, as these two teams can’t stand each other. Baylor is damn near unstoppable at home though, so I am gonna call for a very close game, but Baylor covers late. Dr. Peppers for everyone!

Toledo @ Iowa State (-2.5) – Give me the Cyclones. The schedule finally relents, and the Cyclones FINALLY take advantage. I think they’re going to come out firing and this one isn’t close by the end.

Indiana @ Iowa (-3.5) – Indiana has the offense to compete in this game but I think Iowa’s big O line wears down their defense.  I like the Hawks by 10.

West Virginia (-6) @ Texas Tech – This is where I see West Virginia’s season implode.  A game they SHOULD win on the road, against a struggling Tech team, but they make to many mistakes and Tech gets a much needed win.  Tech 37 WV 34

Texas vs. Oklahoma (-14.5) – Texas defense is good enough to keep this close, but their offense isn’t.  They hang tight in the first half but OU wears them down and wins by 17.

Indiana @ Iowa (-3.5) – This will be a game. I think home field advantage is the difference. Hawk fans better show up. Iowa.

Texas vs. Oklahoma (-14.5) – Oklahoma will be focused after their first defeat of the season. OU.

Toledo @ Iowa State (-2.5) – This HAS to be the week ISU gets off the schnide right? Clones

Last week, my #winners were #losers. This week my picks will #bewell

Auburn (-3) @ Mississippi State – Everybody in Mississippi is too hungover to do this two weeks in a row. Auburn 31 Miss State 24.

Texas vs. Oklahoma (-14.5) – After extensive research on the Texas offense, I have realized they just aren’t a very good offense. That won’t work here. Oklahoma 30 Texas 10.

Toledo @ Iowa State (-2.5) – Toledo has given up over 320 yards passing in four games this year, including a 330 spot to New Hampshire. That’s not good. The Cyclone offense HAS to have a good day and I think they will. Or else, I don’t even want to know. Iowa State 34 Toledo 21.

Texas vs. Oklahoma (-14.5) – I’ve spent all year saying OU would have their early season letdown game only to not have it happen. Then, against a fishy line last week I flipped…then TCU made me flop. This game is close about as often as the Thursday night NFL game has been this year. Scoring points is required to win the game and I know Texas can’t do that. The Longhorns kept Baylor under control last week but this week, they fail. Sooners.

Toledo @ Iowa State (-2.5) – I wrote about the matchup and the numbers that go into it and while I think that Toledo will have success on the ground by average, I think ISU will get some stops and put the Rockets behind schedule just enough. The Toledo defense is better against the ground than they are the pass and I think ISU exploits that which shoud eventually help the running game. ISU will have a comfortable lead into the fourth quarter but the Rockets will battle back to give us an unnecessary heart attack (the usual). But, the Cyclones hang on and cover.

Indiana @ Iowa (-3.5) – Iowa. This seems like a trick. Indiana may have won at Mizz but that was sandwiched between a loss to Bowling Green and a blowout loss at home to Maryland. Hawks should win by multiple scores. "Should".

Texas vs. Oklahoma (-14.5) – OU. I’m done thinking Texas can keep games close against elite teams. And OU will be steaming after TCU loss.

Toledo @ Iowa State (-2.5) – ISU. This also seems like a trick. Iowa State is bad but not this bad. Should be a blowout.

Auburn (-3) @ Mississippi State – Big game hangover will be too much for Dak Prescott Heisman hype, Auburn wins and covers in Starkville.

West Virginia (-6) @ Texas Tech – I am on the Red Raiders, wouldn’t be surprised if they won here. Two teams that can’t play a lick of defense. TTU covers

Toledo @ Iowa State (-2.5) – Iowa State wins this one hopefully in convincing fashion, but I’m okay if it’s even by a FG. Cyclones cover.

West Virginia (-6) @ Texas Tech – The Red Raiders are 1-8 ATS in last nine regular season games. West Virginia’s offense will be too much. Mountaineers in a close one, 42-35.

Indiana @ Iowa (-3.5) – Iowa. Hawkeyes will cover at home homecoming and prove the ground and pound offense still wins in the big 10.

West Virginia (-6) @ Texas Tech – WV. Too much offense for the Tech defense to handle.

Texas vs. Oklahoma (-14.5) – OK. Oklahoma will make a statement after a disappointing loss last week.

West Virginia (-6) @ Texas Tech – Tech’s got to show some fight even if faced with muskets, right? That’s my story and I’m sticking to it. Red Raiders 34, WVY 31

TCU @ Baylor (-8.5) – Gary Patterson’s bunch has been mighty impressive, but so has Baylor, despite some struggles last week. I’ll take the Bears to cover, barely, 38-30.

Toledo @ Iowa State (-2.5) – If the Cyclones’ offense is to gain traction it has to start against a highly suspect Rockets’ pass defense. Cue the season high in scoring — and a cover. ISU 42, Toledo 28

Toledo @ Iowa State (-2.5) – This spread triggers bad memories from 2007. As long as no one bulldozes our line during a game-winner, we’re good. Clones!

Auburn (-3) @ Mississippi State –
Don’t think Miss State can get up two weeks in a row.  Auburn the team to beat in the SEC West and they cover.

Texas vs. Oklahoma (-14.5) – No matter the records, this game is what college football is all about.  Charlie and the Horns keep it competitive and cover.

Indiana @ Iowa (-3.5) – Iowa. I’d be more confident if I knew that Beathard was starting, but I think Iowa wins with either QB.

Auburn (-3) @ Mississippi State – Auburn. Closer line than it would have been a week or two ago…I still like the Tigers.

West Virginia (-6) @ Texas Tech – WVU. This is a good team with losses to two of the best teams in the country.

Texas vs. Oklahoma (-14.5) – Texas. The Horns seem to have the defense figured out, I think they can keep this one under the line.