Got any fingernails left, Cyclone Nation?

After trailing Iowa 14-3 at the half, Sam Richardson threw two second half touchdown passes and led the Cyclones to a 20-17 victory in Kinnick Stadium on Saturday afternoon.

The win didn’t come without significant drama though.

Ankeny native Cole Netten played the role of hero with two seconds to go by converting a 42-yard field goal to win the game.

There is more to the story though. Netten’s first attempt at the field goal went wide-left. However, Iowa head coach Kirk Ferentz called a time out before the snap. Netten got another chance and the rest was history.

Check out CycloneFanatic.com later on this evening for complete coverage of the game from Rob Gray. 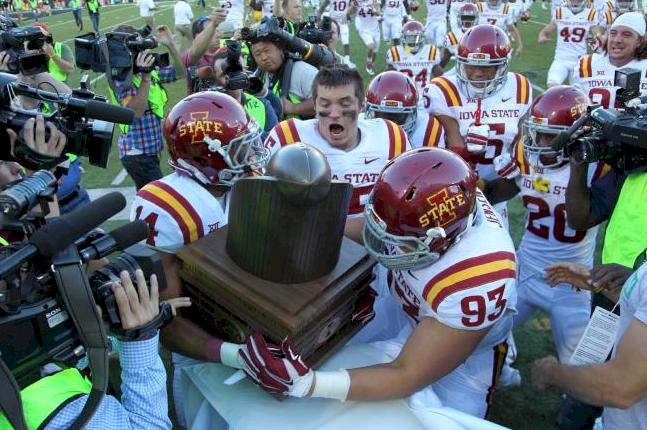 *** Before Saturday, Iowa State hadn’t scored in the second half this season. The Cyclones out-scored the Hawkeyes 17-3.

*** Allen Lazard led the Cyclones in receiving with five catches for 53 yards.

*** Jevohn Miller led the Cyclones in tackles with nine. Cory Morrissey had two sacks on the day.

*** Iowa State forced its first turnover of the season via a T.J. Mutcherson interception in the third quarter. Iowa State’s offense responded with a one-yard touchdown pass from Richardson to E.J. Bibbs.

*** To view the complete box score from today, CLICK HERE.