More often than not, I’m not a big believer in using history to predict future results. While that may surprise you based off some of the crap I spout, that is largely because I cannot logically convince myself that factors completely unrelated to current day have any impact on the outcomes of tomorrow. I do like to use history as a guide and reference, often times to show the difficulty of an achievement that has been completed or vice versa.

That is my stance and I am sticking to it…but, I do make exceptions. And one of those exceptions is with the Cy-Hawk football game. Maybe my perception is completely out of whack but this is a game that hasn’t really changed much since Iowa State broke the streak in 1998. It’s usually a pretty close affair save for 2010 and 2009 (and probably 2005 and 2003 can also be included) and the makeups of the teams and programs has largely staid consistent over that time.

For Iowa, that is definitely the case as Kirk Ferentz took over in 1999 and is still at the helm. While ISU has undergone some coaching changes and stylistic changes within the offense to degree, they are still very much a similar program. Those two things have made this matchup a more consistent exercise in terms of what to expect.

When I started poking around, my first thought was to look at rushing yards and the margin of success between the two teams and how that must determine the victor. While there is a little bit of an eyeball correlation there with the yards per carry margin, it is far from significant. First off, ISU hasn’t held an advantage of more than 0.28 yards per carry since 2000. In just six games back to 2000, ISU has not been outrushed in yards per carry while never having too great of an advantage and is 3-3 in those games. In that time there have been seven games where Iowa outrushed ISU and each time was more than one full yard per carry. But, in those games Iowa was just 4-3.

With that, I dove into the data from recent years to identify keys to victory for the winning team and I came out quite surprised. I went back to 2005 (no, Hawk fans, not because of my selective preference) because that was as far back as I am capable of going while achieving the necessary level of detail in the stats. Concurrently, that seems to be a pretty fair snapshot in history when taking a look at this game. Though for the stats that are more accessible I did go back to 1999, a time frame that encapsulates when the rivalry was renewed and 15 years seems like a nice round number.

Regardless of those facts though, the correlation between turnovers and victories just isn’t there.

But what did I find that appears to determine more than anything else? Check out this chart: 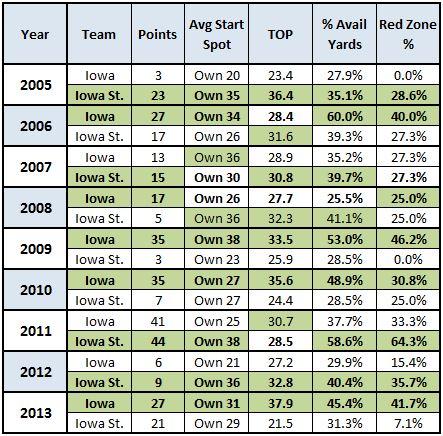 The stats shown are for each team’s offense. The winning team for the game has bolded text and the “winner” of the given stat is highlighted in green. Notice how rare it is to see bolded text not in a green cell? Average field position, time of possession, the average percentage of available yards gained on each drive, and the percentage of possessions with trips to the red zone seem to lead to wins more than anything else I can find.

(Note: the 2008 Iowa offense has the redzone percentage in green because while the percentages were the same one possession was kneeling the ball down in victory formation. Also, the 2010 Iowa offensive starting field position is highlighted green because when you break it out to the decimal point they were ever so slightly better off. In 2011, the overtime possessions were removed when calculating average starting field position.)

Now, it is worth noting that they are all somewhat related and have to do with successfully moving the ball consistently throughout the game.

In the last nine meetings there were five games where the winning team “won” all of these categories, three more where they “won” three of the four categories, and then, there is 2008. A weird game that was played in soggy Iowa City that was full of mistakes for both teams and highlighted by Andy Brodell’s game sealing punt return for a touchdown. While the Cyclones “won” three of the four categories, they faltered severely by not just committing three turnovers (to Iowa’s two) but also had four instances where they turned it over on downs or missed a field goal. In total, Iowa State had three trips inside the redzone and the offense only mustered three points.

So the real question is what does it all mean for the game this year in 2014?

For most of the first two games the Iowa offense has been able to get the ball moving down field. Seven of their 12 drives against UNI registered more than five plays or scored a touchdown and ten of their 12 drives against Ball State were the same way. They have had success moving the ball, but perhaps their kicking situation will rear its head in this game like it did for Iowa State in 2004 and 2008? That would certainly negate their ball movement on offense.

I suspect that the Iowa offense will come out pounding like they did last year and really force the Cyclone defense to stop the run. If the KSU game plan is any indication, Wally will sellout to do so and even go man on the outside against some young and talented receivers for Iowa. Iowa will win if they beat the ISU defense to pulp on the ground like they did last year. However, I’m not sure they can consistently beat Iowa State deep down the field if ISU is able to load the box and stuff the run well enough.

For Iowa State, their offense when rolling has done just that, rolled. The problem is that they have only been productive for about 15 minutes of the game clock in each of the first two games. Against NDSU, they could not move the ball at all after halftime by registering just 57 yards of offense in the second half. Against Kansas State, the offense never recorded a three and out in the second half but they also never added to the total on the scoreboard.

The Hawkeye defense will again be a bear. ISU has had tough sledding running the football with the running backs consistently and Sam Richardson has often been the best threat on quarterback scrambles. Can he continue to make those plays? I think ISU will have a chance to pick Iowa apart a bit through the air IF they are patient and avoid mistakes. If they can successfully keep drives moving similar to last week I will like Iowa State’s chances.

Using the formula above with heightened importance on field position, consistently moving the ball time of possession and the fact that this game is in Iowa City I think you have to favor Iowa. Iowa State still has a young defense that will have to deal in a rough environment while getting pounded in the run game, frequently.

Short of an offensive showing that puts up around 30 points, I don’t think ISU will pull out the win. A win that they so desperately need to get the season on track and signs of life back in the program.