In most years, it seems like a hidden secret. One that is only cracked when you have the key to local knowledge instead of the broad umbrella of a national perspective. Yes, I’m talking about Cy-Hawk football and gambling.

While many things go into the conjuring up of a betting line on a college football game, one key factor in all of it is national perception. That perception drives Vegas bookies to give point spreads that will most likely result in even money being bet on both sides. That assures that no matter the result that Vegas wins because of the “juice” (10 percent cut of any winning bet) and the house ultimately wins.

This is never more evident than the annual Cy-Hawk football game. When the line is unveiled each year, it is almost undoubtedly met with friction as Iowa fans, ISU fans, and neutral observers at the local level almost always seem to think it is too high in favor of the Hawkeyes.

This week, the spread on the Cy-Hawk game started at Iowa, -15.5. Below is an image that shows the betting line and game result since the series renewal in 1977 (sans 1982 which I cannot track down). In the “Line” column the cell is filled black and has gold text if Iowa covered and if Iowa State covered it is filled red and with white text. Additionally, the game score is red and bolded in the instances that ISU won the game. 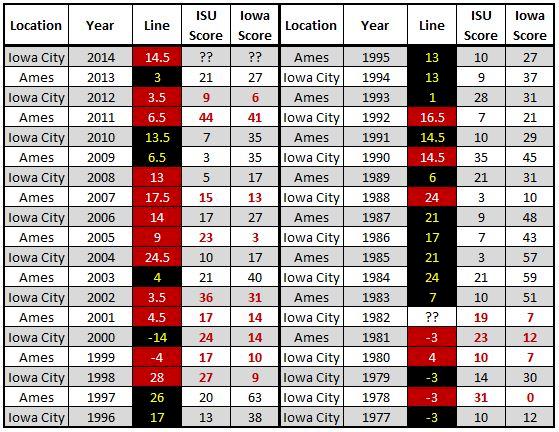 Here’s the news and notes from the betting line of year’s past:

Almost all of that history, but especially since 1998, indicates that often times the line is skewed a little too far to the folks from the east. That matches up with the likely national perception many outside of Iowa would have on this game and hence the betting line often giving too much credit to Iowa or not enough to the Cyclones.

That again seems to be the case this year with the Hawkeyes being 15.5 point favorites. Yet, this is a weird game this year. Iowa has had two subpar outings but still doing enough to win. Meanwhile the two performance data points from Iowa State are at opposite end of the spectrum. Kinnick may be the factor to settle it all in where it counts on the scoreboard, but in regards to covering the line? All bets are off.