My twin brother turns thirty this weekend. He is a University of Iowa grad. I guess that means I also hit the big 3-0. I graduated from Iowa State. We will be on opposite sides of the Cy-Hawk battle this weekend.

Birthdays were the best day of the year growing up. They were all about you, presents, parties and lots of cake.

Once you hit 21, cake gets replaced by lots of frosty, cold beverages. Those make the parties even more fun.

As birthdays pass by, they become less of a spectacle. It is a bit of a complex feeling flipping from your 20’s to your 30’s. Thirty is the year athletes are considered a step slower, muscles are a little bit more sore the next day and hangovers last longer. By the time you turn 30, you are supposed to have settled down and have a steady career. Your carefree days are replaced by responsibility and regret. You aren’t quite at a mid-life crisis, but when you hit that third decade, there is a lukewarm dose of "What do I really want to be doing with my life" type thoughts. Or at least I do; I assume that is natural.

Spending this birthday weekend in Iowa City will add a little extra piece to the reflective thoughts for me, because I almost didn’t make it out of there.

A few months before I was born, a University of Iowa doctor let my parents know that one of their twins was not doing well (My mom grew up in Iowa City and was an Iowa grad, both of her parents were professors at the U of I. My dad graduated from Iowa State.) Something was wrong, there was way too much fluid.  It appeared one of the two babies did not have functioning kidneys. There was a very good chance that once delivered, only one of the two would live. And so my parents waited, hoped and feared the worst.

My mom scheduled the delivery surgery for the morning of September 14, 1984. It was a Friday at the University of Iowa hospitals and Penn State was preparing to visit the Hawks across the street at Kinnick Stadium the next day. It was a showdown of top 15 teams, Hayden Fry and Joe Paterno.

It was planned that the "sick" baby would be the one to be delivered first. My parents had two names picked out for their twin boys, Austin and Christopher. As the day approached, my folks reconsidered one of the names. Christopher was way too common of a name. If the troubled baby died, they didn’t want to be reminded. They opted to name the sick baby Brenton instead. That was me.

I was delivered alive, but filled with excess fluids and immediately hooked up to tubes. It was a touch and go situation. My brother was born without a problem.

The doctors were encouraged, only one of my two kidneys was functioning, but it looked like I may make it. While I hung out in the intensive care unit for a few days, my dad walked over to Kinnick with my older brother to watch the big football game to help take his mind off matters. Twelfth-ranked Penn State upset fifth-ranked Iowa and quarterback Chuck Long 20-17.

I spent a good portion of my first year on this earth within a two iron of Kinnick Stadium hooked up to a bunch of machines. When I was a year old, I had the ineffective kidney removed at the same U of I hospital.

Twenty nine years later and all that remains is the one good kidney and a scar on my abdomen. I rarely even think about those early days or notice the scar. Occasionally someone will ask how I got the scar, "Got in a knife fight with a seedy drifter," is my go to response.

Every few years while growing up I had to return to the University of Iowa hospitals to get checked out. As I grew into my teens and became an Iowa State fan (thanks dad) I would wear my Cyclone gear to those check-ups to irritate my mom and the doctors. I think it worked. When I would get in a fight with my twin as a youngster, he would threaten me, "I have one of your matching kidneys. You better be nice to me." It was all in love, he was a typical Hawk fan.

The Iowa-Iowa State game means a little bit extra. Every one of us has a story or reason to make the rivalry special. The other side includes family, friends, co-workers, neighbors, and doctors (also lawyers, need those too.) No other game can re-create that.

If not for the University of Iowa, I may not be here to taunt the Hawks and let them know that Gene Chizik went 1-1 against Krik Ferentz. Or that only Ohio State has more wins against the Hawks than Iowa State over the last 15 years. If not for the University of Iowa, I wouldn’t have seen the Seneca Wallace rifle to Jack Whitver to ruin Iowa’s undefeated season in 2002, the "Shaggy" game in 2007, the Steele Jantz superman performance in 2011 and the Jake Knott tipped pick heard ’round the state in 2012. 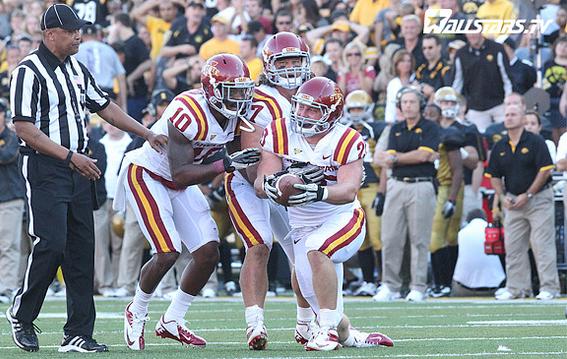 If not for the University of Iowa, I also wouldn’t have been able to meet my amazing wife, fantastic friends and enjoy each day as much as possible over the last 30 years.

For that University of Iowa, I thank you. See you again on Saturday.