Nov. 17, 2012: That was the first time that most Iowa State fans saw a young quarterback by the name of Sam Richardson take a meaningful snap in a Cyclone uniform. In relief of a concussed Steele Jantz, a surprisingly smooth rookie completed 23-of-27 passes for 250 yards and four touchdowns in a 51-23 rout of Kansas.

It was an inspiring debut that provided much-needed hope to a struggling offense at the time. In the third quarter of that game I recall turning to my Cyclone Radio Network colleague Brent Blum and saying, “If he keeps running like that, this kid is going to get killed out there.”

It was in reference to Richardson’s upright running style and very high school-ish frame. Combine his physical attributes (or lack there-of) with playing behind a below average offensive line and and it is easy to understand how a week later – after carrying the ball 18 times in a loss to West Virginia – the redshirt freshman was already beaten and bruised.

That was then. Now, Richardson is a chiseled junior who is very much in the mix to win the latest quarterback competition in Ames.

Last fall, Richardson was listed as a 205-pound sophomore. During the spring, he bulked up to 223-pounds. Over the summer, Richardson trimmed the fat and will kick off the 2014 season at a bulky, yet at the same time, lean 212-pounds.

It has all gone according to plan.

“You look at those guys and you wan to get some insulation under them and get some padding on them,” strength and conditioning coach Yancy McKnight to CycloneFanatic.com this spring. “Spring ball is always the time for us where we can sit there and look at if a kid can carry extra weight or if he is too heavy and we need to cut some back. They (Richardson and Grant Rohach) have frames that can handle that kind of weight. There are things that we looked at with durability and being able to handle some of that quarterback run stuff and not get pounded to death. We also want them to get stronger, especially with their lower body. That will help them with velocity and throws and stuff like that.”

Richardson says that he has already noticed a major difference in how he has felt on the practice field and specifically in Iowa State’s first scrimmage of fall camp last Saturday.

“I have much more velocity on the balls that I throw,” Richardson said at Iowa State’s media day. “That’s something that I also wanted to improve in the offseason. Running wise, I still have the same speed but I am able to carry it.” 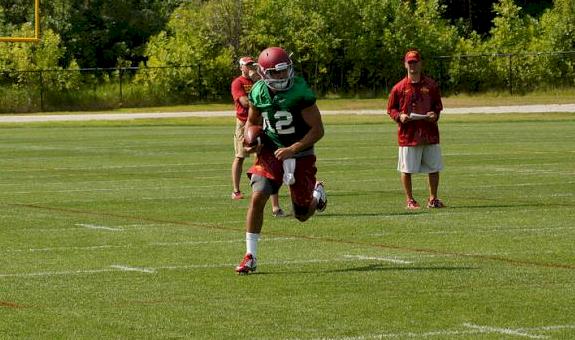 Rohach, who is slightly shorter than Richardson, saw his weight fluctuate from 210 to 224 and back to 217.

“I field physically bigger,” Rohach said. “It has helped all of our arm strengths out and I don’t feel like we are slower based off of the speed work that we have done in the summer. I think we have handled the weight very well.”

Rohach’s gain was encouraging but to an amateur’s eye, Richardson clearly looks like a different man in 2014 compared to a year ago. Two main reasons have played into this. First and foremost, this is what his coaches wanted him do. Adding weight was a top priority. At the age of 21, Richardson is far from an old man, but his maturing body is finally allowing him to add good weight and most importantly, keep it.

“If I went home for a weekend and didn’t eat right or something I was losing weight,” Richardson said. “Now my metabolism is slowing down and I am able to put on more weight than I was. I’ve trimmed down when I needed to and stayed fit. I’ve eaten healthier. I try to eat basically every two to three hours. I eat my main meals and in between meals, I eat snacks when I know I am going to get hungry. I take snacks to class. That’s the huge thing. Before bed I try to eat something as well.”

The stronger arms that Iowa State’s signal callers are experiencing this August are simply positive side effects to the weight gain. The main reason why this was such an offseason priority was to make all three men – including redshirt freshman Joel Lanning – more durable.

It has been consistently noted all camp long that Richardson was not healthy during the majority of the 2013 season.

On Sunday, Paul Rhoads said that Iowa State’s quarterback competition was a dead heat. Based off of those words and also the intangibles surrounding the situation, it is clear that Sam Richardson is still very much in the mix to be Iowa State’s starter on Aug. 30 when North Dakota State comes to town.

Both Richardson and Rohach are bigger, faster and stronger than they were a year ago. Will that result in more wins for your favorite team in 2014?