I mean, it may not be literally the most obvious thing ever but it has to be close. And it is probably far truer for a football program like Iowa State that, on a national scale, is mediocre in its best years. That statement can be a tough pill for Cyclone fans to swallow but it is quite simply true more often than not. It is our badge, let’s just wear the thing, eh?

But what is so obvious; Iowa State’s success in relation to the schedule.

I went back to 1949 and compared Iowa State’s winning percentage in conference play to the percentage of their opponents that were ranked. I used conference games only to weed out the outliers of cupcake scheduling and whatnot. The results are decisively obvious.

First up is the chart with year by year win percentage and percentage of opponents that were ranked. In this presentation it is just a bunch of mostly illegible jagged lines with little to gather. Trends can be seen in spots but it is mostly just a mess of jagged lines. 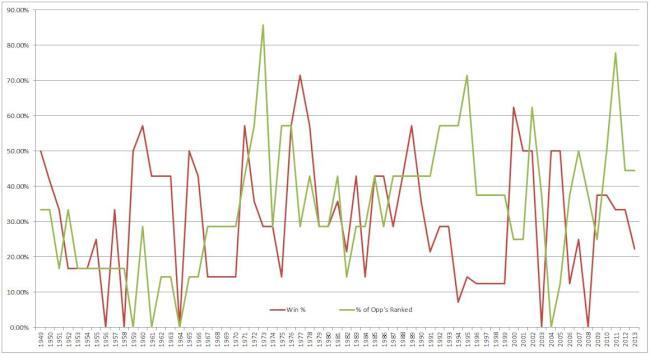 To make this a bit easier on the eyes and helpful to draw conclusions I used the same data but each year is a marker of that year plus the previous four seasons. That gives us a total of five seasons of data at each point and a much smoother data line to review. 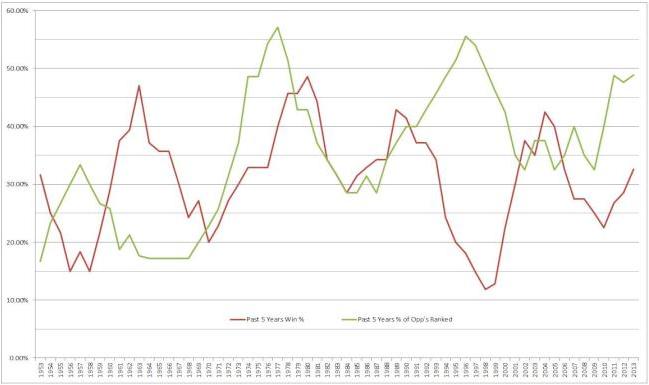 So what do we see here? Very few instances where the schedule was at its most difficult while the team simultaneously achieved their best results. Most every spike in schedule strength is matched with a valley in win percentage and vice versa. The major exceptions are in the late 1970’s and early 2000’s.

But, many of us know that the early 2000’s were largely built on beating lesser teams than they were on beating the top dogs on the schedule. The best Dan McCarney teams rarely defeated ranked opponents but they did routinely win versus the teams they were “supposed to” beat. In conference play, Dan McCarney was 27-68 in his time at Iowa State, but just 2-31 when playing against conference opponents that were ranked. (Paul Rhoads is 14-29 in conference games and 4-17 in conference games versus ranked teams).

As stated, this is really, really, really mind-numbingly obvious. But even with that, the visual of it is so pronounced that it is helpful to even the lifelong fans when put into this visual format. I know it is for me.

Outsiders claim often that Cyclone fans and even members of the program use the difficult schedule as an excuse to failing seasons. It could be proved to be the case but while it is difficult to discern the difference between excuses and reasons, I still hold on to the thinking that it can be done. The problem is that emotion often gets intertwined into those discussions and can make them less valid.

While a difficult schedule itself doesn’t lead a program to worse results on a guaranteed basis, it is my contention that for a program like Iowa State it makes success far more of an uphill climb. It takes razor thin margins for error and thins them out further. For programs with elite success in recent years, or in their program history, or with upper echelon talent the trend between success and schedule strength is probably less staggering.

But that isn’t the case for Iowa State trying to make their progress to a small claim of the now “Autonomous Five” conferences. All of this may not actually be the most obvious thing ever, but it has to be close.