Confidence is king. If it is golf on the weekend, executing in your day job or shooting a basketball, confidence rules the world. With it, any person can be a titan in any industry. Without it, well, join the others in the back of the line.

As a true freshman on an Iowa State basketball team full of “grown men,” Matt Thomas lacked confidence at times during the 2013-14 season. Now, with an entire year of college living and Big 12 ball under his belt, fans attending YMCA Capital City League games in West Des Moines have seen a new man.

“It is crazy how much one year does,” a rejuvenated Thomas recently told CycloneFanatic.com.

“We were going through a bunch of sets and things that we do in transition and what not,” Thomas said. “All of that is second nature now. Last year, it was like ‘Wow, this is a lot of new stuff.’ I was out there thinking so much on the court where now I just go out there and play. Everything comes naturally to you.”

Thomas, who averaged 5.5 points per game as a rookie, clearly possesses the talent to be a very good Big 12 basketball player. Out of high school, he was a consensus top-100 national recruit and chose the Cyclones over a handful of quality high-major programs. But for one reason or another, the game moved faster than Thomas’ young mind could process it during much of his freshman campaign.

The above scenario is a death wish for a pure shooter like Thomas. 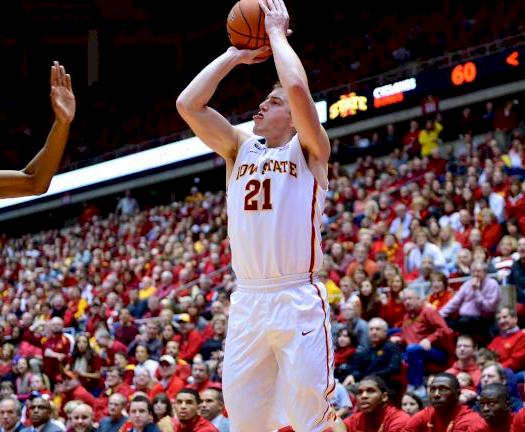 Here is the good news. During a season in which Thomas’ self-assurance was admittedly shaken, he still made 44 3-pointers, the second most by a Cyclone freshman in Iowa State history. He still started 15 games and still had his best game against a quality league opponent in the tone of 14 points vs. Kansas State. Even though he was sluggish at times, Thomas proved that he can clearly play with the big boys.

“A lot of people don’t give him the credit he deserves,” Thomas’ teammate, Naz Long said. “If he was uptight and a lot of people say he was in a slump for a good amount of the year, he still finished second I believe as an all-time freshman at Iowa State to hit threes. What’s going to happen when he’s not tight? He’s going to fill it up.”

Long’s sentiment is an important part of this story. Not once last season did Thomas’ teammates lose confidence in him.

“We all know that Matt is a great shooter,” Long said. “The whole team is confident in him. I tell him every time that I am on his team to shoot the ball. There is a better chance of him making it than missing it and it isn’t even close.”

It didn’t start off well for Thomas, who was arrested for an OWI last month. However, Thomas was recently very candid when talking about his run in with the law. He said that he has learned from it and for the record, this is a young man that has no history at all when it comes to getting into trouble.

When it comes to basketball, Thomas’ minutes fell off towards the end of last season. He started 15 games but when Fred Hoiberg needed production during a March run to the Sweet 16, Thomas wasn’t a guy that he relied on.

“I want to see the floor a little bit more late in the season,” Thomas said. “My minutes kind of dropped late last year in conference play and I want to be out there more than I was last year.”

Clearly, regaining confidence in a game setting will be the key for Thomas. The sophomore has to hit shots and if he does that, he will play for Iowa State. But there is more to it and that’s what Thomas is working on this summer. Thomas realizes that he is at a bit of a disadvantage athletically and because of that, he is trying to be more fit than the other guys.

Thomas will likely be suspended for two or three games next season but after that, watch out. With his new lease on life and the comfort factor that comes with being a veteran, this is one Cyclone that could be due for a breakout year.