For the first time since the Seattle Seahawks drafted Seneca Wallace back in the spring of 2003, Iowa State’s former quarterback is not in an NFL camp this summer.

No worries. Wallace, who is now 33-years old, is keeping himself plenty busy. This Saturday, along with former Cyclones Jack Whitver, Lane Danielson and Jeremy Loyd (to name a few), the Seneca Wallace Summer Football Skillz Camp will make its Iowa debut at the Prairie Ridge Sports Complex in Ankeny.

“I was always a part of doing camps in Seattle,” Wallace told CycloneFanatic.com. “I did some in Sacramento but this is the first time that we are doing one back here in Iowa and I’m excited about it.”

Wallace said that the camp already has around 350 participants registered. Registration is still open too, which you can do by visiting JoycesAngels.org. (See camp flyer for complete details.) 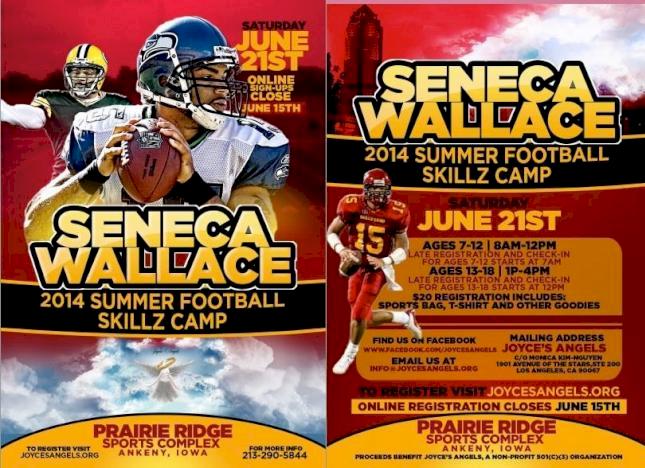 Wallace’s career in the NFL isn’t’ necessarily over. After an injury-plagued 2013, the decade-long pro is still holding out hopes that an NFL team at some point might sign him this offseason.

Wallace’s wife is from Gowrie, Iowa. He credits Iowa State as the place that launched his NFL career. It’s easy to see why Wallace felt the need to give back to central Iowa.

“I think just because since I left, I never came back and did anything as far as a camp or anything like that,” Wallace said. “It is always important for where it all started for me and my success and career, it all started here in the state of Iowa. Being able to come back and team up with Jack (Whitver) and Lane (Danielson) and former Iowa State players, it is just fun.”

The plan is to make this an annual event.

“Hopefully over the next few years we can make it a bigger event where it is maybe a two-day event,” Wallace said. “Just being able to give back to the community and all of the support that they showed us when we were in school and that they continue to show Iowa State. Hopefully Iowa State can use it as a potential recruiting tool, being able to come out and check out some of the talent that we have. We want to grow it so that it is bigger each and every year. Potentially, we want to make it a Saturday-Sunday camp where little kids go on Saturday and it is more in detail and not rushed with the bigger kids. We want to make it a big weekend and big party for everybody to come out and have a good time.”

Wallace isn’t exactly expecting any of the campers to remember “The Run” though.

Check out CycloneFanatic.com next week for more on Seneca Wallace’s future as well as his thoughts on the 2014 Iowa State football team.