There is no theme to this installment of the Cyclone Fanatic Mailbag. You Fanatics were across the board with questions this week and for that, I am forever grateful (being slightly sarcastic). Honestly, you all did ask some good ones this week. Let’s begin with hoops and a question from Erikbj.

Erikbj writes: Does Fred stick to a 7-8 man rotation this year (assuming Jameel McKay is playing), or do you see him going 9-10 deep and trying to speed the game up even more?

CW: I believe that in theory, Fred likes the idea of going seven to eight deep. He’s done it year after year for that reason and also, Iowa State really hasn’t had much more depth than that. But I do know that he likes the continuity factor of playing that many guys.

However, let me say this: The biggest compliment I can give Hoiberg as a coach is that every season, he adapts to his team. It doesn’t go the other way. If one group is better at running, he’ll speed it up. If he needs to change the pace and what he does from a schematic standpoint, he has proven that he most certainly will.

Hoiberg adapts very well to his surroundings and I see the extra depth being a way that we will see him grow as a coach once again next season. How deep will the Cyclones go in February and March? My guess is eight to nine but if he needs to change his ways to help the team win, Hoiberg will. He always does.

Psiclone writes: If you are up one point in the Big 12 Tournament final and near the end of the game with the other team having the ball, which 5 do you put in to make the stop?

CW: I guess a lot of that depends on who you are playing, you know, for match-ups and what not.

But as far as a generic scenario goes, give me Monte Morris, Bryce Dejean-Jones,Dustin Hogue, Jameel McKay and Georges Niang. I could throw Daniel Edozie in there if I need another rim protector. He’s proven that he can step up in that type of a situation before. I don’t want Naz Long in there if he doesn’t have to be. The same goes for Matt Thomas. So yeah, I’m pretty happy with that lineup right there.

DandyCyclone writes: When will ISU be notified of the decision on McKay’s waiver request? Is there a month or week when most waivers are finalized?

CW: Just made a phone call about this. It sounds like Iowa State will know sometime this summer, depending on when all of the paperwork officially gets filed.

Quick editorial: I doubt this happens (McKay getting the waiver) but considering it is the NCAA, who really knows?

Let’s just say that he is not granted the waiver, well, McKay will still get some quality experience before Big 12 play begins and Iowa State has set the schedule up because of this.

Why go to New Jersey to play South Carolina on a neutral court in January? The recruiting aspect is important but so is getting McKay a game against a high-major opponent before league play.

In addition to that, he will play against Drake on a neutral floor and Mississippi Valley State at home.

Mj4cy writes: A few questions: Will E.J. Bibbs have the best tight end season we’ve seen in a decade at ISU?

CW: If he stays healthy, yes, he should. The only former Cyclone Bibbs really has to compete with (as far as tight ends go over the last decade) is Collin Franklin, who led the team in receiving with 54 catches in 2010. Walter Nickel (blast from the past) is the next best during that time.

I’ll say this though. Franklin was competing with Jake Williams and Darius Darks for catches in 2010. The wide receivers around Bibbs are so much better now, which could make catching 54 footballs a challenge. However, I think at the very least that Bibbs will score more than three touchdowns, the number that Franklin hit in 2010. 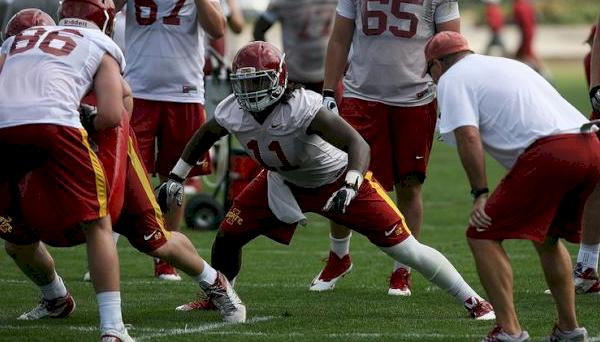 Who is under center for the Vikings come game 4?

Who leads ISU in scoring, rebounds, and assists next winter?

CW: Bryce Dejean-Jones or Georges Niang. That’s a toss-up and could go either way. I’ll lean towards Niang because I know what he can do in the Big 12 but with the amount that Dejean-Jones will have the ball in his hands, he’ll be a real threat.

As far as rebounding goes, Dustin Hogue. Jameel McKay might challenge him but I Hogue has a real shot to be the best rebounder in the league next season.

ISUCY23 writes: What are your top 10 coaches in college basketball? Is Hoiberg one of them? If not, how close is he in your opinion?

CW: That is a MASSIVE question. I could write for hours about this. I’ll tell you what: Tune in to next week’s podcast. Blum and I will break this down but yes; Hoiberg would absolutely be in my top 10.

CW: All signs point to Grant Rohach starting for the Cyclones vs. North Dakota State to open the 2014 season. Who will end the season as the starter? We all know that circumstances (injuries, etc.) will dictate that. Let’s say that everybody is 100 percent healthy (in a perfect world) for the entire season though. I’d say that Rohach will end the year as Iowa State’s starter too. As a redshirt freshman, the guy was thrown into an awful situation with a depleted line, below average wide receivers and a suspect running game. What exactly were fans expecting early on from Rohach last season? He ended the season on a roll and to me, that’s what is important.

I still like Sam Richardson too. He was never healthy last season but having said that, I do believe Rohach to be in the clubhouse with a decent sized lead at this point in time.

CyArob writes: Are there any incoming freshman other than Lazard or Downing who have a shot at playing this year? Maybe one of the cornerbacks?

CW: I’ll be surprised if any other freshmen play. That’s how Iowa State wants it to be too. These aren’t four/five-star guys we’re talking about here. They need time to develop.

You know, I looked into the cornerbacks and just didn’t see any freshmen that pass the eye-test, which is actually important at that position. You don’t want to send a 5-foot-9, 160-pound rookie like De-Monte Ruth out there to get carved up if you don’t have to.

Going by body type alone (because really, that’s all that anybody has to go by at this point in time), I’d give linebacker Sam Seonbuchner a look. He signed at 6-foot-2, 220-pounds and I assume will be above 230 by the time fall camp starts. If they need help on special teams, that is an option. I wouldn’t bet on it though.

You’ll see Lazard and Downing out there along with the majority of the summer JUCO’s. That’s my guess.

501Clone writes: How much Busch Light will be drank at Blum’s bachelor party this weekend?

CW: I’d put the over/under on cases consumed at four…(Hint: Take the over).

CloneinWDSM writes: Can we be best friends? I like Busch Light.

CW: In my mind, we’ve been besties for a couple of years now, bro.

Trojbrown writes: Sherron Dorsey-Walker seems to be the guy no one is talking about. He’s done all the right things since arriving. He redshirted his freshman year knowing there weren’t enough minutes to go around, worked on his game and beefed up a little. In year 2 he saw some minutes. How important is it to get him some playing time early in the non-conference this upcoming season? (Knowing that McKay will be eligible to play late December.) I just don’t see him getting many minutes once McKay is on the court and the kid is extremely talented.

CW: This is a big offseason for Sherron Dorsey-Walker. You’re correct about him doing the right things. By all means, the young man has done everything that Hoiberg has asked him to do. But he wasn’t an impact guy last season. Matt Thomas beat him out. Naz Long beat him out. Does that mean that Dorsey-Walker’s career will be sitting on the bench? Not at all. But again, he needs to have a good offseason and as you mentioned, prove his worth during the non-conference portion of the schedule next fall. He can fill up the net but needs to do more. The progress of SDW’s game is an intriguing story heading into next season. 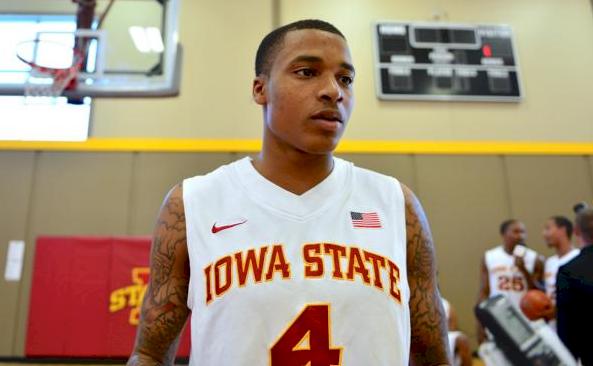 Klamath632 writes: NCAA Softball popularity is growing by leaps and bounds. Every game of the WCWS was broadcast on ESPN this year. Sadly, ISU has lagged in this sport and the coverage on CF is non-existent. Do you think ISU softball has a future, or is it just a Title IX sport that gets token support? It’s an exciting game and I’d love to see it become relevant at ISU.

CW: Full disclosure, I love the sport of softball. When I was the sports director at a radio station back in western Iowa, I scheduled myself to do play-by-play for softball games over baseball all of the time.

Having said that, as a free site, paying somebody to cover Iowa State softball just doesn’t make any sense for us. It doesn’t demand enough eyeballs. That’s not to say that it isn’t relevant in the eyes of some and for those folks, Cyclones.com covers the sport very well. It just wouldn’t work with what we are trying to do here.

Frankly, I can’t ever see softball being a big deal at Iowa State. If they were competing for national titles, perhaps it would move the needle a little bit but realistically, can anybody ever see that time coming?

Personally, I’d love to see this as I already noted, I love the sport. As far as gaining a ton of traction with the casual Iowa State fan though, I think that is a long shot.

Isuska writes: can we get your honest opinion of the FGL, Luke Bryan, ZZ Top, Jason Derulo(sp?) performance at the CMT Awards?

CW: I have not seen this yet (DVR) but if Florida Georgia Line and Luke Bryan were both involved, my guess is that it was incredibly lame.

CYCLONEST8 writes: Going to any music festivals or concerts this summer?

CW: Yeah I think I’m going to head out to the Guthrie River Ruckus on July 25 for the Justin Moore show. I was actually just telling my wife last night that he is quickly becoming one of my all-time favorite country acts, which seems weird because he is so young. I can’t get enough of his stuff though.

Other than that, I don’t have anything scheduled yet. I’m going to Eric Church when he comes to Des Moines in September. I’d like to see Dierks Bentley in Council Bluffs this August but don’t see my schedule allowing that to happen.

Nuts4Cy writes: If it were your money and you had to spend your own hard earned money on donating to ISU and buying football season tickets, would you feel comfortable paying $500/per seat and donating a $1,000/year for the product on the field?

Side question, what would your reaction then be when you got the letter saying that the ticket prices and donation levels may need to be increased – if they have another 3 win season in 2014?

CW: This is another great podcast topic. We will discuss it next week. I promise!

Thanks for the questions everybody and have a fantastic weekend.