On Senior Day at Hilton Coliseum, five measly seconds were the difference between a besieged basketball team on a three-game losing streak and one that has real momentum heading into next week’s Big 12 Tournament.

Five seconds were the difference between an apprehensive fan base and an ecstatic one.

Five seconds were the difference between hanging heads and smiles as wide as the continental divide.

Over the short span of five paltry seconds, Hilton Coliseum transformed from a mourn-filled morgue into an animated celebration.

This Hilton Magic is real, folks.

Iowa State trailed Oklahoma State by 16 points with 16:21 to go on Senior Day but the determined Cyclones rallied back with a vengeance. A 12-0 Iowa State run sparked a wild end to the game, which Iowa State eventually won by an 85-81 mark in overtime. 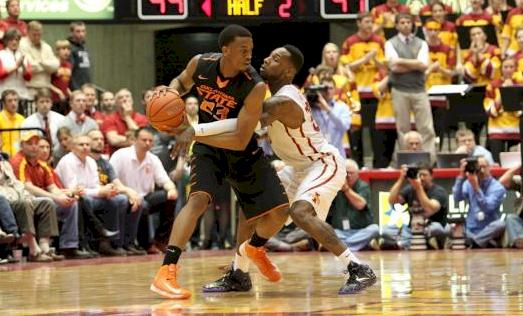 It’s getting to the extra period that was the chore. With five seconds to play in regulation, Oklahoma State led by two with an 89 percent free throw shooter in the form of Phil Forte heading to the free throw line. As expected, Forte sunk the first. Out of nowhere, the marksmen missed the second.

“You didn’t expect Forte to miss,” Fred Hoiberg said. “He doesn’t miss very many of them. We said, ‘If he misses, we’ve got to get that thing up the court quick.’ We didn’t have a time out.”

Off of a Matt Thomas rebound, DeAndre Kane dished the rock to Naz Long, who never flinched and buried a 25-foot jumper from the right wing.

“I would like to say that I drew that one up,” Hoiberg joked after the game.

Long has developed a reputation of a guy who hits big shots in critical moments throughout Iowa State’s 23-7 regular season. In fact, the Cowboy killer hit a handful of them in Iowa State’s triple-over win over Oklahoma State in Stillwater in February.

“The kid just hits big shots. That’s all it is,” Melvin Ejim said of Long. “He’s a big-time player, big-time shot maker and made another one today.”

Overtime was especially interesting considering that Oklahoma State was playing without its best player, Marcus Smart, due to fouls. Meanwhile, the Cyclones were without Ejim and Georges Niang (for the majority of the period).

With two-thirds of the “Big 3” riding the pine, Kane was asked to step up in the extra period and that is exactly what the Marshall transfer did in the form of a 27 point, eight assist and seven rebound performance. Seven of those points were scored in overtime.

“I was just happy and excited,” Kane said. “The fans screamed their lungs out all day. I wanted to thank them for giving me another opportunity to play here in front of these fans and this great university.”

Ejim ended his career in Hilton Coliseum with 12 points and eight rebounds. Both seniors are contenders to be named the Big 12’s Player of the Year. League awards will be announced on Sunday afternoon.

“You want to go out on top in a building that means so much to you,” Hoiberg said. “Melvin had four years in this building. DeAndre had one. Both had some pretty special moments in here and you want to go out with a big one. Both of those guys did that in a big way today.”

It’s a done deal that Iowa State will meet Kansas State in the 4-5 game of next week’s Big 12 Tournament in Kansas City. The Cyclones and the Wildcats will tip off at 11:30 a.m. on Thursday and the game will be televised on ESPN2.

“One thing that Naz Long does not lack is confidence. He is going to step up to shoot that thing. There was a possession at Kansas State where he took three of them in about eight seconds. He was open. You expect him to take those shots.”

*** Georges Niang snapped out of his minor slump with a 22-point performance. It was his ninth 20-point game of the season.

Prior to the game, Iowa State’s student section chanted, “Hang his jersey,” in reference to Ejim.

*** The student section also did this, which is an appropriate way to end this column.