Kansas City, Mo. — Don’t refer to Monte Morris or Matt Thomas as freshman – not in front of Fred Hoiberg at least. That was The Mayor’s message after Iowa State’s Wednesday’s shoot-around at the Big 12 Tournament in Kansas City when it came to his key rookies being prepared for their first taste of the postseason.

“I don’t need to give them advice,” Hoiberg said. “They know how to play. They have gone all the way through the season now. I don’t think you consider freshmen, freshmen still at the end of the season like this. They have 30 games under their belt. It’s about going out there and playing and having some fun.”

All season long, Iowa State (23-7, 11-7) has basically known what it was going to get from the likes of DeAndre Kane, Melvin Ejim, Georges Niang and Dustin Hogue. The combination of Naz Long and the two freshmen have been the wildcards. When Iowa State gets quality production from any of those men along with what has been tabbed as the "Big Three," the Cyclones are a darn tough team to beat.

Morris, a point guard averaging 5.1 points and 3.7 assists per game, clearly appreciated the sight of the Sprint Center on Wednesday morning.

“It’s big time,” Morris said. “It’s like an NBA arena. I just like the atmosphere and everything. I have a good feel for it. I got some shots up. Everything felt good so we will see tomorrow.”

Thomas has visibly struggled over the last few weeks of the season but did hit an important 3-pointer along with some clutch free throws in the overtime victory over Oklahoma State. 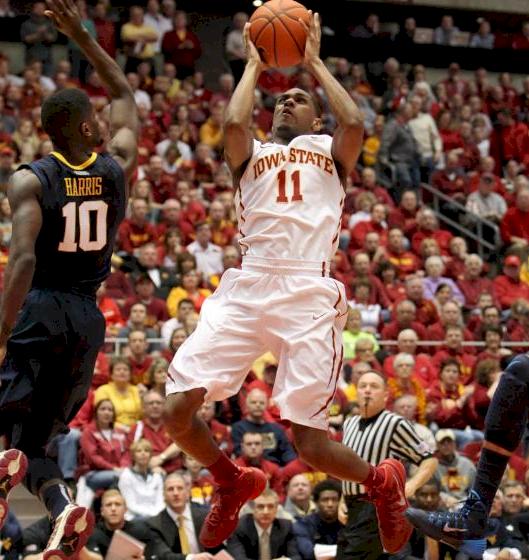 Getting Niang back on track

A 47 percent shooter on the year, Iowa State sophomore Georges Niang has made only 25 percent of his field goal attempts over the last three games. Niang, who has been in foul trouble more often than not over the last three weeks, combined to score only 12 points (he averages 16.2 per game on the season) in recent losses to Kansas State and Baylor.

“He was a little bit flat,” Hoiberg said. “I talked to him about getting more air under his ball. I think a lot of it was due to foul trouble. He just wasn’t able to get in a rhythm in those two games that we lost.”

Like most confident offensive players do, Niang attempted to shoot his way out of the slump last Saturday vs. Oklahoma State. The forward chucked 25 shots, made only nine of them but scored 22 points.

Hoiberg left the regular season encouraged about Niang’s near future.

“I’m telling you, he could have had a 35-point night, as many of his balls went in and out,” Hoiberg said. “I thought that Georges was in a really good rhythm in his last game and hopefully that will carry over tomorrow.”

According to the geniuses in Las Vegas, Iowa State is a two-point favorite over the Wildcats on Thursday. A point spread like that obviously means that experts are predicting a toss up. One thing is for certain about this one though. Iowa State is expecting another physical basketball game.

“They do such a good job of bodying you up, Hoiberg said. “They try to make you uncomfortable. They try to make you start your offense further out on the floor and they will hit you. It is something that Bruce Webber has done a great job with. It has been Kansas State since I got here.”

“Whenever you go to Manhattan, you better expect a bar fight. How I see the Octagon of Doom, if there was a prison ball league, it would be at the Octagon of Doom. That’s for sure. It’s always tough down there. Coach Weber has them playing extremely hard and physical. They have big guys up front and they are just not going to back down. That’s the type of mentality that I am going into Thursday’s game with.”

The talk of the town in Kansas City is the status of Kansas center Joel Embiid. The freshmen, who many have projected to be the top pick in this summer’s NBA Draft, is reportedly going to miss the next two weeks due to a back injury.

During his media session, Hoiberg was asked if Embiid’s current status should affect Kansas’ seeding in the NCAA Tournament.

“I don’t think so,” Hoiberg said. “I have seen what Kansas has done this year. To come in here with five new starters, I think that Bill Self has done an amazing job with this group. Embiid is obviously a very big part of it but it sounds like he is going to play again. Should that affect an overall seed? Personally, I don’t think that it should but I’m not the one making the call on that.”

Hoiberg on the side…

Q: In your experience as a player and a coach, is there another gear for the postseason in preparation for the NCAA Tournament?

FH: You do it now because this is preparation for the NCAA Tournament. Everything that I’ve been though, this is what I tell our guys, that this is what it is all about. All of the work that you put in over the summer. Fall workouts, we were able to start two weeks earlier this year. Everything that we have done to this point is preparation to what we are going through now. That is an opportunity to win a Big 12 championship and hopefully compete for an NCAA championship.

Q: You picked up a big win over Oklahoma State last Saturday. How important was that?

FH: I think it was huge to gut out that win over Oklahoma State. Our backs were against the wall on multiple occasions in that game. Guys just continued to step up and make big plays. We needed some help too. We had the best free throw shooter in the conference miss one. We took advantage and made a big play when Naz rose up and knocked down that big shot with confidence. That was big. You want to go out and win your last regular season game, especially at home, and send your fans home with a good feeling. I think that is a confidence building game, anytime that you can win a game like that where you really have to fight through adversity, being down 16 at one point in that game. To find a way to come together and pull out a win, I think, was very important for us.