How did Niang choose to describe this game that Monte Morris said was more physical than Thursday’s brawl vs. Kansas State?

“Maybe the UFC? It was a great game,” Niang said. “I’m really proud of my team and the way they handled adversity and came back.”

Niang, who received five stitches after the game, scored a team-high 25 points for the Cyclones. The sophomore was almost perfect in the second half, after going 4-for-12 from the field in the first 20 minutes. He went 7-for-10 in the second half and to put it simply, Kansas had no answer.

“It’s not him on the low block, it’s him driving to the low block.  He scores the majority of his points by being crafty,” Kansas coach Bill Self said. “He’s not the quickest guy, but he’s probably as hard to guard as anybody because he can play at different speeds and he’s shifty and he can get you leaning one way and come back the other.”

And Self continued to rave about Niang’s game…

“He’s very good at spinning, as you guys know,” Self said. “So what I thought he did a great job of was to catch it beyond the arc and put his head down and drive, and then however we guard him after that, he countered it. He’s really good. He’s a fun player to watch play unless he’s kicking your butt like he did tonight.”

No worries Cyclone Nation. Niang will be good to go when the Cyclones play Baylor in the Big 12 Tournament’s championship game on Saturday at 8 p.m. in the Sprint Center.

“I knew I was okay. I just felt a warm feeling in my hand and the next thing my eye was bloody,” Niang said. “I was actually pretty bummed out that I couldn’t be out there to celebrate with my teammates. It’s a big win for us. I think we’re ready to compete for a championship tomorrow.”

“You can’t really guard that hook shot. He is our point guard out there. We have a 6-7, 250 pound point guard. He is our closer and we love him for it.” 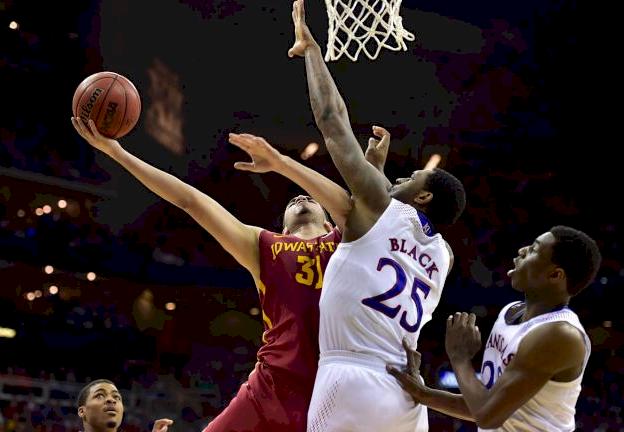 Here’s a good one for you. Kansas went on a 16-0 run in the middle of the first half, however Iowa State only trailed by two at the break. In the Sprint Center? Huh? Most teams would have been down by 10. As they have done so many times this season though, these Cyclones found a way to overcome adversity.

“It just shows how together we are,” Monte Morris said. “It’s family. We don’t care who is scoring or anything like that. We are just playing basketball and having fun, dunking the ball and smiling. It’s that much better. You will see that type of basketball from here on out.”

Hoiberg put the majority of blame for the 16-0 Jayhawk run on himself. Iowa State’s usually mild-mannered coach was given a technical foul that sparked the Jayhawk run.

“I thought we got a little unraveled out there and unnerved when I got my T,” Hoiberg said. “Once we got back in the next time out, I told everybody to take a deep breath, me included. Once everybody calmed down and took a deep breath, we closed a 10-point deficit to two.”

Although he wouldn’t admit it, the Hoiberg technical was somewhat controversial. Hoiberg was handed the foul for going too far out onto the floor.

“I came out on the floor because it was a media timeout,” Hoiberg said. “I didn’t come out to protest the call. Did I deserve it? Probably. Yeah.”

Hoiberg said it was only the second technical of his career, which includes his days as a player. The other came in Iowa State’s NCAA Tournament third round game vs. Kentucky in 2012.

“I try to stay calm out there,” Hoiberg said. “I think your players are a reflection of what you do on the sidelines. I try to stay as calm as I can but you know, maybe we needed a little spark today when it happened? I thought we just, it wasn’t us out there after I got it so I probably won’t get another one.”

*** The 94 points that Iowa State and Kansas combined to score in the first half is the highest first half tally in Big 12 Tournament history.

***DeAndre Kane dished out six assists in the win, which moved him to No. 7 on Iowa State’s all-time single-season assist chart. Kane also scored 20 points in the Cyclone victory.

*** Iowa State’s 11 3-pointers set a record for threes made in a Big 12 Tournament semifinal contest.

*** All five of Iowa State’s starters scored in double-figures.

*** Baylor defeated Texas 86-69 in the other semifinal. The Cyclones and the Bears will play at 8 p.m. Saturday on ESPN.