SAN ANTONIO, Texas — Heads up Jimmy Fallon. The Cyclones are coming to town.

After Sunday night’s 85-83 Round of 32 NCAA Tournament victory over North Carolina, Iowa State will visit a familiar city for Friday’s 6:27 (central) tip vs. 6th seeded UConn – familiar for two Cyclones at least.

Iowa State assistant coach Matt Abdelmassih is a proud New York native. The man bleeds Knicks orange and blue so it is easy to understand why coaching a game in Madison Square Garden will be a dream come true for Fred Hoiberg’s 28-year old assistant.

“It’s the best place in the world. There’s not a better place to play a basketball game,” Abdelmassih said. “It’s a dream for me to see these guys when they walk in that building for the first time.”

The same can be said about Iowa State junior Dustin Hogue. Before attending junior college at Indian Hills in Ottumwa for two years, Hogue attended high school in Yonkers, N.Y. Hogue, who scored 14 points with seven rebounds in Sunday night’s win, has only been to Madison Square Garden once in his life.

“To actually be able to play there is going to be something incredible,” Hogue said.

Abdelmassih is a 2007 St. Johns graduate. Hogue grew up a Syracuse fan. That means that both are brutally acquainted with Iowa State’s Sweet 16 opponent, former Big East python, UConn.

Of course, Fred Hoiberg’s old teammate during his NBA days with the Chicago Bulls, Kevin Ollie, is UConn’s head coach.

“UConn is as big as anything out there,” Hogue said. “To go back home and have a lot of people rooting against me will be kind of crazy but I should have enough family and friends there to cancel them out.” 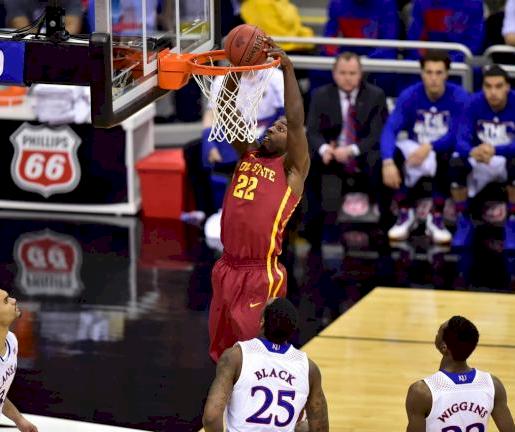 On the side with Dustin Hogue…

CF: Who is your favorite Knick of all-time?

CF: Will he re-sign with the Knicks next year?

CF: What do you think about Phil Jackson?

Hogue: He’s going to turn the season around. He will fix my Knicks. I’m hurting right now.

“Right when you walk in you feel the energy. Every great person whether if it is in entertainment or in sports, has walked through that building. That place is electric. I know that the fans in New York are going to support the event. It will be awesome playing against UConn, as a home game.”