Now the real fun begins. You will be hard pressed to find four better games in one setting than what we have today at the Sprint Center. Kansas City is absolutely hopping and the Cyclone fans are out in full force.

The enthusiasm picked up a notch last night around the Power & Light district. The crew I was with had a couple Maerzen beverages (which quickly got renamed to Ross Marsden’s) at Gordon Biersch. It was then off to the PBR country bar, interestingly populated mostly by West Virginia and Iowa State fans. There is a sociological paper to be written about that I think.

Intense conversations of foul or defend dominated the discussions and ABC 5’s Dave Zawilinksi was relentless in his position. The conclusion we came to is there is no right answer for #foulordefend because, "You are dealing with human beings. And officials."

I called it a night and missed out on one of the more legendary 2 on 2 battles ever assembled. The media hotel has a 9 foot hoop in the lobby and it has become a point of contention for overly competitive media members. Few are as competitive as the aforementioned Zawilinski. He threw down a challenge that he and WHO’s Michael Admire could defeat Chris Williams and the Ames Tribune’s Travis Hines in a 2 on 2 showdown. Admire was a dynamite high school athlete and definitively has some game, Zawilinski is the Richard Sherman of the media without the talent level, more talk than action. Williams is a steady shooter and willing to extend a hard foul.

But the MVP and biggest surprise was Hines. The beat writer for the Tribune has clearly been paying attention to Georges Niang’s game, because he has a similar array of post moves, spins and ability to create space with the lower body. Allegedly Hines and Williams won two of the three battle royales amongst an audience of the Oklahoma student managers and others looking for a laugh.

But to quote Hines: "Blum, there were no winners last night."

The four games today all have point spreads in Vegas of three points or less. I have to think that there has not been a more balanced day of quarterfinals in any conference tournament heading into the day.

DeAndre Kane vs. Marcus Foster is the key matchup. If the Cyclones hold Foster below 20 points, I really like their chances. K-State struggles to score if Foster isn’t carrying them.

There is some real sense that Oklahoma State is the team to beat here in KC. After trailing Tech 8-0, they buried the Red Raiders.While Marcus Smart gets most of the attention, Markel Brown is the  most underappreciated guy in the league. He has been unreal the last month and is playing himself into a sure-fire NBA pick.

Scott Drew still confuses me and his Bears predictably toyed with the Horned Frogs. They easily could have won by 25-30, but let TCU hang around for most of the 2nd half. I have a feeling Oklahoma sends Drew and his time-outs home tonight.

The biggest question mark for me today is what West Virginia team shows up. They are playing for their lives and assuredly need to win the Big 12 tournament to make the Big Dance. How will they handle the make or break stage? And how do they handle the Texas bigs?

Still no picture with Hollywood Higgins yet, but I’m confident this will get done.

Get pumped up, it’s going to be a tremendous day in the nation’s best conference.

The basketball at the Big 12 tournament is obviously superb, but the extra-curriculars of the event can be the most interesting. Without fail, by walking in and around Kansas City you will run into some notable people and see some unique camaraderie. A couple years ago in Oklahoma City, I witnessed a few high-quality (of course) Big 12 officials sharing a brewski after they had finished their duties in stripes.

This year, three of the ten Big 12 teams are staying at the same hotel as the media, which presents an interesting dynamic. Last night when we were checking in for the week, Bruce Weber was telling his K-State squad to get some rest.

This morning after Georges Niang concluded his interviews in the tunnel outside the locker room, the Oklahoma State squad sauntered by and their long range gunner Phil Forte stopped to give Niang a bro-hug. A mutual respect I’m sure.

If you keep your eyes open, you may even run into the Big 12 commissioner. After a white-knuckled drive through a sleet storm last evening and an unfortunate turn down a one-way street in Osceola, Chris Williams needed an ice cold beverage. (If the city administrator of Osceola is reading this, you really need to work on illuminating your one way street signs on the highway. Perhaps the ginormous Lakeside casino sign has sapped all the electricity.)

We stopped by the hotel restaurant and saw Big 12 Commissioner Bob Bowlsby meeting with some comrades. Our group really wanted to take a page from the Dumb and Dumber play-book,

"Hey Flo, Bowlsby and the fellas offered to pick up our check, they said to just put it on their tab. They are very nice."

We are not as brave as Lloyd Christmas.

Iowa State just concluded their "practice" session, the Cyclones’ chance to get up a bunch of shots and get acquainted with the spacious Sprint Center while the media huddles around in hopes of finding something interesting to capture with their cell phone cameras. My take away from the 45 minute session is Daniel Edozie may be Iowa State’s best dunker, Sherron Dorsey-Walker is capable of making unguarded half court shots and ESPN reporter Holly Rowe needs to keep a better eye on her coffee cup while at courtside, as it fell victim to a flying basketball. 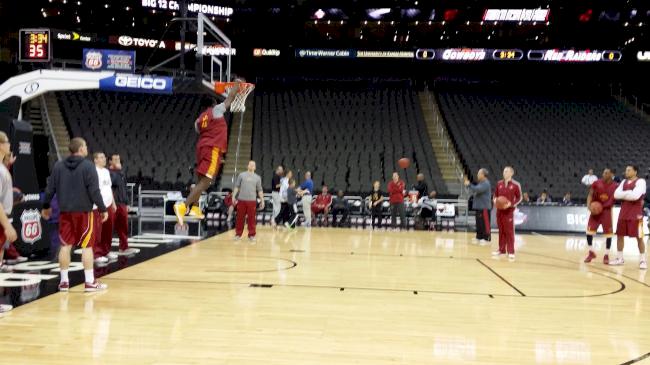 More than anything, you could get a real sense of the bright lights, the "big-time" feel. The atmosphere even in a relatively meaningless practice session was ratcheted up a notch. "Whenever you can walk into the place where the Big 12 Championship is held, it’s an honor," said Georges Niang.

"It’s big-time, like an NBA arena, I like the atmosphere and the floor, everything feels good," said Monte Morris.

Iowa State appeared relaxed and confident and the goal is to get even more comfortable in Kansas City.

"We all know what is at stake, if you lose one you have to go home and we don’t want to go home early," said DeAndre Kane.

Chris Williams, the fine publisher of this website, decided it would be a savvy business move to give me full reign to document the ins and outs of this week’s Big 12-palooza. I can assure you he will regret this decision by the end of the week. We will be hopping in Williams’ Wilson Toyota Camry en route to Kansas City later today and staying until Hoiball concludes.

I have no idea what this will look like by the end of the week, but rest assured there will be plenty of chatter about Scott Drew’s timeout selection, displacement fouls and if the planets align, my quest to get a picture taken with official John "Hollywood" Higgins.

I may even write about some basketball as well. There will be links, tweets and mindless observations at the talent level in the Power & Light district.  For those who can’t make it down to what I believe is the best sporting event of the year, hopefully this provides a glimpse into what you are missing.

Keep checking back and if you are into the Twitter, follow me at @brentblum to find out when the latest drivel is posted. As Royce White would say, #BeWell.