AMES — Perhaps the name “Knott” will crack Iowa State’s starting lineup this season after all.

Even so, redshirt freshman WILL linebacker Luke Knott is putting pressure on junior Jevohn Miller this fall camp. That is according to defensive coordinator Wally Burnham, who made glowing remarks regarding Knott after Saturday evening’s scrimmage at Jack Trice Stadium.

“Luke Knott is really making progress. More than I thought he might be at this point,” Burnham said. “I think we might have at two-man race there before the season is over.”

It’s an interesting conversation to have at the very least. Knott currently weighs in at 6-foot, 216 pounds. Then there’s Miller, who is listed on Iowa State’s latest depth chart at 6-foot-1, 240 pounds. Against the run, chances are Miller is the man. But against a spread-heavy Big 12 offense? This is where Knott, a former defensive back, could thrive (assuming Iowa State is in a 4-3 set, which won’t always be the case of course).

“Luke has benefited from the redshirt year, where Jake in that year was in the two-deep as well as playing special teams,” Paul Rhoads said. “Luke has had a full year to learn and learn under his brother, which is awfully important too.”

When Iowa State coaches talk about Knott, his brain is always the first characteristic that they bring up. Like his big brother was, Luke is football smart, which is awfully important to Burnham. The obvious comparison here is impossible not to make.

“I know he will hate to read this but he reminds me a lot of Jake with his smartness and understanding of football,” Burnham said. “He’s just not as physical because he’s not as big as Jake was. He’s a smart, heady football player. He can make all of the checks right now. He can get lined up so if you can do that, you’ve got a chance.”

Chances are, both Miller and Knott will see a bulk of playing time in the fall and that’s a good thing. They are different players who compliment each other well. But after the last week of camp, the coaches have left little left to the imagination. Rhoads made things simple on Saturday night.

“You will see him on the field, not just in special teams but he will be playing linebacker for us this fall." 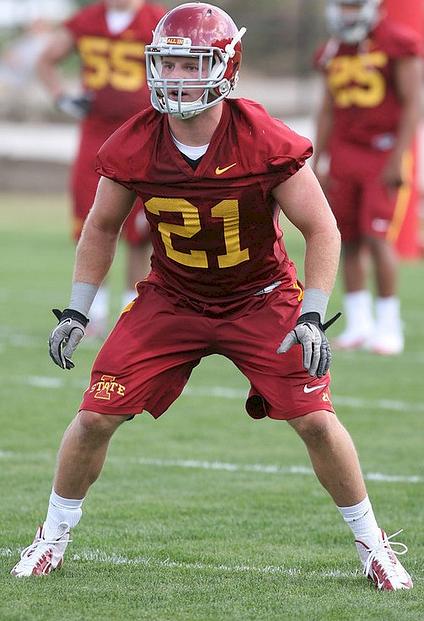 Cornerback still up for grabs

Iowa State still hasn’t made a decision as to who will line up opposite of Jansen Watson at the other cornerback position when the Cyclones face UNI on Aug. 31. Redshirt freshman Charlie Rogers still sits atop the depth chart with Kenneth Lynn, Sam Richardson and apparently Damien Lawry breathing down his neck. Rhoads called this competition a “fun” one to watch.

“Especially at that position, when you are competing for it, you can be a little aggressive,” Rhoads said. “That’s not always a good thing at that position and I think all of those guys have wised up. Charlie, Sam, Ken, Damien Lawry. I’m very pleased with how Jansen Watson is playing at this point. It will remain a fun competition to see who will run out there on the 31st.”