Cyclone Fanatic’s coverage of the 2013 NCAA tournament is brought to you by our good friends at Channel Seeds. Visit your local Channel Seedsman today at Channel.com as they still have top products available for spring.

We’ve heard it a lot this year from local media, national media, opposing fans and even some of our own. It usually starts with referencing the spacing of Fred Hoiberg’s offense and ends with the propensity for this team to knock down three point shots. It all snowballs in to one nice box and bow with the common cliché, “Iowa State lives and dies by the three.”

Those exact words may not be spoken but I can assure you that the game commentators Friday night will make reference to the importance of the 3-point shot. “If the Cyclones are hitting shots they can beat anyone.” First of all, which team in the country does that not apply to? Second of all, why is it that if a team’s strength on offense is 3-point shooting it becomes a “live and die” proposition? The main point being that if you take away any team’s strength – no matter what it is – they will likely struggle. But just how much do the Cyclones really struggle if they have a poor shooting night from deep (relatively speaking to their other performances)?

Welp that is why I am here. I first dove in to this topic back on March 4 to evaluate the importance of the three point line for the Cyclones here. Then, I dove in again three days later here (scroll down) with a different angle. Yes, this is clearly a pet peeve of mine that I would like to shoot down because it is such a common misconception.

First off, I can’t exactly pinpoint which one single 3-point shooting statistic is the most important when evaluating a team’s 3-point shooting performance. But there are a number of obvious 3-point stats that can add puzzle pieces to the story.

The first most people would consider is the raw number of made 3-pointers in a game. For obvious reasons I would dispute that alone as the best way to evaluate shots because it gives no context to tempo or even accuracy from behind the arc.

What about that accuracy though, maybe that is the best way to look at this? That obviously doesn’t work because if a team goes 1-for-1 from the 3-point line that 100 percent shooting performance from deep doesn’t really highlight the importance of the 3-point line.

Two other ways to consider the importance for a team in a given game are the percentage of points a team scores from distance or the percentage of possessions in which a three point shot is made. The first shows the team’s reliance on the three ball versus other means of scoring and the latter accounts for tempo with the number of made threes.

*** Read more of Kirk’s work by visiting his website, enCYCLONEpedia.com ***

Yes, all four of these methods to evaluate 3-point shots are different. Because I can’t say unequivocally which is the most or least important, I included them all. But, here’s what I did. For Iowa State’s last 20 games (18 conference games plus the two conference tournament games), I ranked their performance in each of those 3-point stats. I also have a composite column that averaged the rankings of those four 3-point stats for each game.

In the second column from the right is the rank of their points per possession performance in each game. The importance of this is key. It seems to me that everyone wants to declare the importance of the 3-point shot by relating any give 3-point statistic to the result of the game. However, the last time I checked a team’s 3-point performance doesn’t play defense and a team can have a great shooting night and still lose, if they don’t defend. That is why I have the team’s points per possession ranking to compare this too instead of simple wins and losses (though the wins and losses are there for reference). Each column is color coded from red to blue (best to worst).

That is the content of the table below but now for the analysis. The entire table is sorted by the average of the 3-point statistical rankings (third column from the right). In essence, I am claiming these 20 games to be ranked from the best 3-point shooting performances to the worst in the last 20 games.

If the three point shooting is indeed vital to the offense to the extent that “living and dying” by the three would suggest you would expect to see an awful lot of red at the top in the points per possession column and blue to the bottom. But, that isn’t much the case. 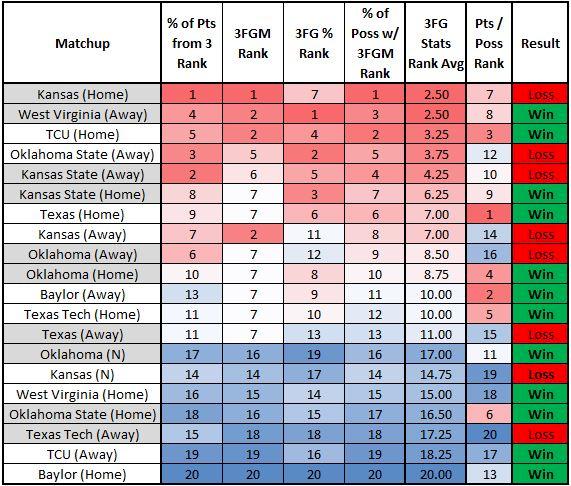 Yes, there is some tendency for the best points per possession games to be near the top but it is far from foolproof. The Cyclones second, fourth, fifth, and sixth best scoring games came in their 11 worst three point shooting games. Even the Cyclones best scoring game was just the seventh best game for them shooting the ball behind the arc.

Of course, this trend goes the other way too. Four of ISU’s worst overall shooting games from 3-point land were just 10th, 12th, 14th and 16th in scoring performance.

I will say that in the bottom seven games of 3-point shooting where the Cyclones are full of blue cells they mostly struggled to score. The only outlier is the Oklahoma State home game where ISU had their 6th best scoring performance of the bunch at 1.23 points per possession.

If you have been, or prefer for some reason, to relate 3-point shooting to wins you can see that those are all over the map. Four of the five worst performances were wins and three of the five best were losses.