This may or may not be common knowledge but when really smart basketball guys like Ken Pomeroy and Dean Oliver use possession based stats it isn’t an exact possession count, it is a formula that has been agreed upon to give a very close estimation of the number of possessions. The formula for a team’s number of possessions: FGA + Turnovers – OReb + (0.475 x FTA)

That is mostly straight forward. The offensive rebounds are subtracted out because they are duplicate of FGA and the theory is that they are more of a continuation of a possession than a bonus possession. Team A and its opponent will always be within one possession of each other in a game because of that. If offensive rebounds were not subtracted out then that would not always be the case.

The (0.475 x FTA) is a historical estimation that tries to account for possessions that end with free throws but free throws come in many different forms; “and ones”, two, one and one.

Watching the ISU at Kansas game plenty of people were pointing out that Iowa State shoots an inordinate amount of threes, in their opinion. That is somewhat true and made me consider looking at how possessions are distributed (similar to the numbers that I run during football season where I look at the frequency of how a possession ends) to make an apples to apples comparison.

To do this I adjusted how the number of possessions in a game is calculated. I omitted the subtraction of OReb so that in essence an offensive rebound is a new possession for the cleanliness of the following percentages.

Below is a table that shows this breakdown for each Big 12 team. Again, the possessions per game in this instance is calculated as FGA + TO + (0.475 x FTA). Also worth noting is that forced turnovers vs unforced (UF) turnovers isn’t an exact classification. For this forced turnovers are just the opponent steals and unforced is the rest of them. It hopefully offers some added insight.

In the first column you’ll see why I wanted to run these numbers to look at three point attempts in the first place because not only does ISU play at the fastest tempo in the league by averaging 73.7 possessions per game (only Texas Tech also averages above 70 possessions per game at 72) but when you omit offensive rebounds as I did they have an average of 89.5 opportunities for field goal attempts. That is due to the tempo as well as the Cyclones and their second best offensive rebounding percentage at 38.9% (the total number of available offensive rebound numbers that Iowa State gets on average).

The final column accounts for an estimation of the percentage of possessions that end at the free throw line, time running out, a jump ball, etc…

To further help those that enjoy visual stimuli here is a pie chart of just the Cyclone possessions above and how they end, on average. 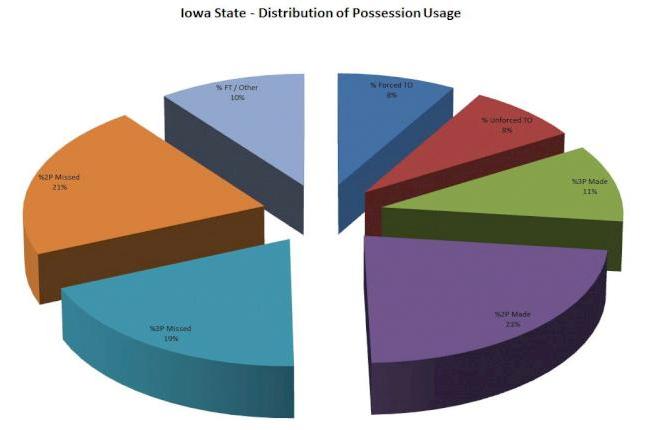 In the end the Cyclones are third in the league in scoring efficiency at 1.11 points per possession which, in the end, is the most important factor in all of this.

If you have any comments or questions, please do pass them along, whether it is on this matter or any other or perhaps even a research topic in general.  My game preview for Texas is up on my site (www.encyclonepedia.com) that will always be in that same general format and the Basketball Stats page will also be updated as frequently as possible that contains the league Four Factor Analysis, player advanced stats, and other team advanced stats.