Chris Williams’ Monday Musings are now being brought to you by Adam Gray Insurance – a Nationwide Insurance agent based out of Johnston. Did you just graduate from college? Everybody needs insurance. Why not support a Cyclone Fanatic? Give Adam Gray a call today at 515-299-0536.

When I interviewed Iowa State’s new offensive coordinator Courtney Messingham last week, I really didn’t expect to learn much about which man has an edge over the other in what’s become an annual tradition here at CycloneFanatic.com – That’s the name your starting quarterback game in the middle of July.

But something Messingham said did provide some additional perspective as to how I’m looking at this competition – or controversy – or whatever you want to call it.

"My biggest concern has always been the entire offense," said Messingham about when the coaching staff might make this big decision. "If they feel comfortable with both guys then I am not nervous about making a decision right now. If I start feeling like the entire offense is losing confidence in one or the other or they don’t feel comfortable with both or either being the starter, then you’ve got to make it a little bit quicker."

Words like upside, arm strength, leadership and athleticism get tossed around on message boards all of the time. Heck, I’m guilty of doing the same thing on radio shows and even in these columns. But maybe, just maybe all of that stuff is overrated?

Maybe as Messingham alluded to, the guy who the offense as a whole responds most positively to will win the job? What a novel concept!

Football is a team sport. After talking to Messingham, I think that every single one of us is approaching this competition the wrong way. Which man can lead this offense to score as many points as it possibly can? That’s the man for the job. So take the specifics – the arm strength argument – the he beat Oklahoma State point – you get where I’m going – and throw them out the window. Think big picture.

It’s July 9 and this quarterback quandary hasn’t changed a bit since the day we wrapped up spring football back in April.

I do know one thing. Iowa State’s quarterback situation will be better in 2012 than it was in 2011. It has to be. Unlike that of a year ago, both men have seen live bullets. The system has been simplified and by all means whoever the quarterback is should have more weapons at wide receiver and tight end than last season.

Fall camp is less than a month away. Bear with this cruel offseason for only a few more weeks fanatics. That football itch you’ve been suffering through is about to be scratched. 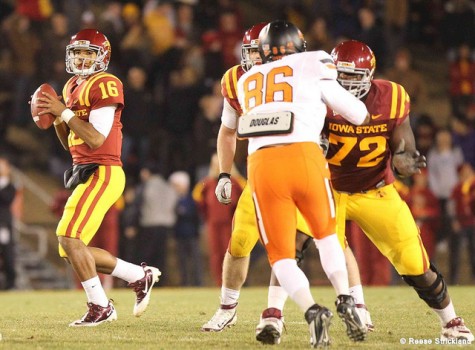 For the "the Big 12 should only take Notre Dame as a full member" guy – get a clue.

News flash: The Irish will not be joining any league as a full-time member any time soon. So why not get the rest of the university’s sports on board, make money off of the name, schedule some football non-cons and if Notre Dame has to join a league in football at some point, you’re lined up perfectly?

Sure – The Big 12 appears to be and by all means is in great shape right now. Television contracts, a new commish and a grant of rights has this league sitting pretty. But the instability of the last three years cannot be ignored or forgotten. The bleeding has stopped and the wound started to heal a long time ago. But adding Notre Dame to the Big 12 (in any fashion) would not only be the cherry on top, but the Oreos and caramel as well.

So to the "Big 12 shouldn’t take Notre Dame as anything other than a full member" guy, consider this your reality check. Jack Swarbrick gets invited to every policy meeting in college athletics for a reason. It doesn’t matter what happens, when it happens or how it happens. Notre Dame will always have a voice and a very loud one at that.

Any league should and does want the Irish on their side and if you think the Big 12 would turn Notre Dame down in a part-time role, you’re dead wrong and possibly a little bit crazy.

— Any big golfers out there? If so, you might be able to relate to this tale. So growing up, I played golf all of the time. My dad took me out to the course 3-4 times a week, as did my late Grandma Jean. I grew up in a family that had all sorts of passion for the sport. I played junior golf and did quite well. But during my middle school/high school years, I had a shoulder problem. I had a surgery and could never really regain my original swing/passion for the sport after that. I pretty much quit playing in college. After graduation, I worked as the sports director at KMA Radio down in Shenandoah. My hours were from 5 a.m. to 1 p.m., so I chose to hit the links quite often on nice afternoons. Nope. I still couldn’t find that sweet swing that I had as a child. It’s a frustrating thing when you shot better scores in fifth grade than as a 25 year old man. Last summer, I quit the sport outright.

"It costs a ton of money and all it does is piss me off," I told my wife after Billy Fennelly, Brent Blum and Adam Gray made me look foolish out at Veenker on my 27th birthday. "I’m done."

And I wasn’t kidding. I played golf once last year (that very day). I avoided playing in Cyclone-related outings. I was embarrassed as to how bad I had gotten. I was a true head-case who just didn’t enjoy the game anymore.

I made a vow to myself early this spring. That was to not take the game so seriously. I can only imagine that my grandmother, who I used to watch golf with for hours and hours as a child, was disappointed in how I just gave the game that I once loved up as quickly as I did.

Early this spring, things had gone better. I still wasn’t hitting the ball as far as I once did but my short game was keeping my scores respectable. So two weeks ago – again on my birthday – I golfed with Blum and one Adam Gray. Gray – the true king of all things insurance in central Iowa – politely pointed out a few flaws in my swing. Shortly after he did this, rain came. I went home and thought about Gray’s tips. The next day I returned home to southwest Iowa where my dad and brother-in-law asked me to play at Bedford. Bedford’s course is basically a field with nine greens in the middle. But it was a shorter, less intimidating course than the ones you see in the Des Moines area so this was very good for me.

I thought about Gray’s tips and by hole five, I was hitting the ball off the tee double the distance of what I have done in years. This carried onto last week and through the weekend. Now I’m not shattering any records around here by any means. You golfers know how it goes. Now that my long game is back, I all of the sudden can’t putt!

But this game of golf is fascinating isn’t it? All I know is that I owe Adam Gray a lot. For the first time since I was probably 14, I’m enjoying golf as a way to get away again. Doesn’t matter if it’s 105 degrees out or not. All I want to do is play and I’m a happier man because of it.

— I did something that I rarely do over the weekend. That’s watch a bulk of movies. On Friday night, I sat by myself at the Ankeny theater (what a loser) watching the new "Spiderman" flick. Personally, I enjoyed this version better than the previous movies. The acting was better and the plot had so much more depth. I can’t wait for part two.

Yesterday afternoon, the wife and I took in "Project X." Wow….

And last night, I watched "Bad Teacher." That my friends was a dud. The only reason I suffered through this was because I was attempting to clean out the DVR…It had been stockpiled since January.

— I’m excited for baseball’s big week in Kansas City. After working at KMA for three years, I got to know many people within the Royals Radio Network quite well. They’re good people. I’m excited for those guys to be able to host the 2012 All-Star Game. Lord knows they haven’t called a meaningful baseball game in over a decade. It’s about time something positive happens to that franchise.

Big Bulls fan here but damn, the Heat just got a lot better.

"If you want to crown them, then crown their a**es," right Denny Green?

Yeah that’s right. And the Heat have officially been crowned – by me at least.

So long. I’m going on vacation next week so look for Blum to fill this spot for me.