Chris Williams’ Monday Musings are now being brought to you by Adam Gray Insurance – a Nationwide Insurance agent based out of Johnston. Did you just graduate from college? Everybody needs insurance. Why not support a Cyclone Fanatic? Give Adam Gray a call today at 515-299-0536.

You can’t have this…

…Without a little of this…

“People have described this (Iowa State) as a dream job and there is no other place I’d like to be,” Rhoads told the Des Moines Register last week. “I’ve never said those words. "

That’s just one quote. It’s one quote that in my opinion, far too many people took way too literally without reading others from the same interview.

“Iowa State has got to want me all that time, to begin with," Rhoads added. "That hasn’t always been the case with coaches at any place. But the bottom-line answer is: If 20 years from now I’m retiring as the head football coach at Iowa State, I’m going to be a very, very lucky man.”

During a 10 o’clock sportscast last week, WHO-TV Channel 13 Sports Director Keith Murphy said something along the lines of, "There was once a time when the very thought of Dan McCarney being fired seemed impossible."

I remember those days. I also remember Danny Mac being shown the door.

Yes – Rhoads is an honest human being. For lack of a better phrase, he wears his heart on a sleeve. That’s why at little old Iowa State, Rhoads has become a coaching superstar after only three years on the job. It’s why his players would run through a wall for the man (that’s a classic Fred Hoiberg line) and it’s why he’s quickly become one of the most popular sports figures in the history of Iowa State athletics.

Don’t be upset about the man being honest. You know where his heart is. That’s in Ames, Iowa. To those of you who freaked out over last week’s comments, would you rather have a guy give honest answers to legitimate questions or Bobby Petrino? 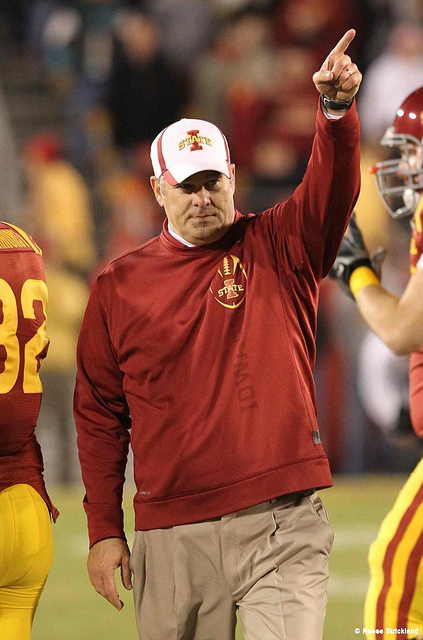 And oh I know how much you’ve missed it. Who isn’t in love with the topic of major conference realignment? If you think following the changes in the BCS leagues is a headache, try keeping track of what’s going down with the low to mid-major conferences right now. Holy mackerel!

The good news is that as I wrote about extensively last week, the Big 12 has all of the sudden become a game-changer in realignment. Add it all up.

New commissioner + new schools + new TV deal = a lot of swag and quite a bit of cash to offer.

You can’t catch a fish without tossing out the bait right? There’s no point in fishing for minnows with some hungry giant catfish waiting around the corner.

During the middle of last week, I tweeted something along the lines of how this Florida State to the Big 12 rumor was starting to develop some teeth. The Internet was (and still is) a giant local hair salon, full of gossip and rumors galore.

"Florida State to the Big 12 doesn’t make any sense," said the writer.

Here’s a question for you fellas, and/or anybody else taking the common sense approach to realignment.

Since when did anything make sense when it comes to expansion?

Over the last three years, realignment chatter has consumed me and if you’re reading this columnn right now, I assume you too. Every year when this stuff pops up, it hurts my marraige. I play with my dog a lot less (poor Paisley). Instead of exercising four days a week, I’m lucky to walk around the block once. I watch a lot less television and as much as it pains me to admit, the amount of dirt races I attend shrinks significantly.

My point is, while I don’t know what’s going on behind closed doors (few people actually do), I feel like I’m a bit of a crafty veteran when it comes to sitting back and watching this all go down. The number one thing I’ve learned over the last three years is that if you see some smoke (like we’re experiencing right now), the fire is usually pretty quick to show its ugly face.

This Florida State chatter has followed the classic realignment pattern.

It started off as an Internet rumor. Then – somebody who is important (a couple of Big 12 folks) shot it down. Rumblings then picked back up (late last week). Over the weekend, somebody from the school of conversation opened his mouth (Jimbo Fischer and THIS GUY). And conveniently, the ACC is holding its annual spring meetings this week.

Compare that timeline to what we’ve seen recently in the Big 12. Sound familiar?

Will Florida State end up in the Big 12. I have no idea. But these "rumors" have legs and anymore, absolutely nothing would surprise me.

Dollars to make sense and yes, it is all about the money.

— Football is a monster. Money runs the show. But switching from one conference to another isn’t as cut and dry as some people believe. College football columnist Chadd Scott explained this side of the argument as well as anybody I’ve seen last week in this column.

Money is great, leadership and decision-making are more important.  FSU and Clemson have plenty of money to compete for national titles if their programs are properly led.

Scott is discussing issues at Florida State over the last decade. Basically, he’s asking how a school like Florida State allowed Bobby Bowden to run that national football program into the ground the way that he did (for the record, I’m as big of a Bobby Bowden fan as there is).

As I do with just about every column that I read daily, I compared that situation to Iowa State – an underfunded athletic department that faces geographical hurdles when it comes to recruiting. When it comes down to money, geography and tradition, Iowa State is clearly near the bottom of the Totem pole when it comes to comparing all of the BCS schools.

By all means, Iowa State shouldn’t experience a lot of success in much of anything really.

But then think about Iowa State from a leadership point of view. Gregory Geoffroy set the tone. If there’s an athletic director in America who has done more with less over the last five years than Jamie Pollard, I’d like to see it. Bill Fennelly, Fred Hoiberg and that Rhoads guy all come to mind as well.

If Scott’s point about leadership being the key over money and all of that other stuff, then you’ve got to like where Iowa State is at in a tumultuous time.

— What. A. Weekend. I had the honor of throwing a bachelor party for my best friend on Friday and Saturday. We golfed for almost eight hours in Clarinda on Friday and then headed down to Kansas City Saturday night. A lesser man would have taken today off. Not me though Cyclone Nation. Not me. I’m currently about seven coffees deep and ready to roll.

— The Bachelorette begins tonight. (Insert snarky comments from guys who are "too cool" to admit that they watch the show with their wives/girlfriends here.) If you’re a guy who watches the show, enjoys the show and isn’t afraid to admit it, here’s a cyber hand pound.