It will go down as one of the most legendary plays in Iowa State football history.

Iowa State vs. Oklahoma State. Tie game. Double-overtime. Jake Knott tipped a Brandon Weeden pass that was eventually picked off by Ter’Ran Benton. The Cyclones went on to capture the biggest win in the history of the program.

Have you ever wondered why the ball shot so far into the air after hitting Knott’s hand?

“I had to wear a plastic thing because my hand is broken. When I went to hit it, it hit right there on that spot," Knott recently told me. "I think that’s maybe why it had so much distance on it and shot up like that. It went right to him. It was meant to be.”

Knott has been playing in pain all season long. He’s suffered one injury after another, but Iowa State’s Chuck Norris (let’s make that nickname stick Cyclone Nation) hasn’t missed a game.

“It’s one of those things that you go back and look at and think that everything happens for a purpose," said Knott. "I had to struggle with injuries this year but just to make that one play, if you look at it philosophically, it’s interesting.” 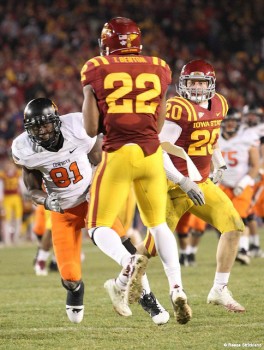 CF: You guys have a ton of young wide receivers in the program, some of who could have played this year as true freshmen if needed. From your experience, how valuable will the extra bowl practices be for them when spring football rolls around?

JL:Every little it counts. During the bowl practices we do a lot of development stuff and also a lot of stuff with the first and second team that they weren’t able to do during the regular season because of the scout team. At the beginning stages of bowl prep when we aren’t doing as much Rutgers stuff, they were able to get a lot of reps with the ones and twos. It’s good for them to get in there and compete with everybody.

CF: From a timing standpoint with the quarterbacks, how much further will they be along?

RUTGERS NUGGET: Lenz also told me that he fully expects Rutgers’ defense to play plenty of man-to-man against the Cyclones in the 2011 Pinstripe Bowl.