By Kirk Haaland of enCYCLONEpedia.comFollow Kirk on Twitter @Khaal53

The mark of any great coach is their ability to not only make adjustments on the fly and in preparation for the second half of individual games, but also to make adjustments as the season wears on. If you were to grade out the Iowa State coaching staff on that alone this year — especially the defensive staff — we would have some honor roll students as coaches in Ames.

The improvement of the defense since the debacle in Columbia, Mo. has been noted multiple times and the data to support that is significant. So, I went ahead and “DWID” (Gene Chizik reference to his team’s motto last year, “DWWD (Do What We Do) — The most unnecessary acronym of all-time since it takes longer to say the letters than the phrase itself) and compiled all of the key stats of the first and second half of the season as well as game by game for analysis.

There are numbers compiled on a per game basis but also on a per possession basis, which is more real world, especially in terms of points given up. For instance, due to the varying number of possessions in a game, the scoring defense performance against Kansas (10 points in 9 possessions) is very equivalent to UConn (20 points in 17 possessions), even though the total points allowed was doubled. That same theory holds true for turnovers and explains why I show them and how often they occur as a percentage of possessions as opposed to just the raw turnover numbers.

Here are the game by game stats for the Iowa State defense:

The season totals comparison for the first six games to the last six games: 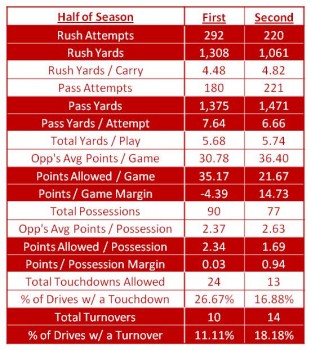 Every single game in the second half of the season resulted in Iowa State holding the opponent to fewer points than their season average, while that only happened three times in the first half (Iowa would technically qualify if you only consider the points given up in regulation).

In the second half of the season, only Kansas State scored more points per possession against Iowa State than they averaged for the entire season.  In the second half, the Cyclone defense held high powered offenses like Texas Tech, Oklahoma State and Oklahoma to astoundingly low scoring numbers. Tech scored 2+ points per possession less versus Iowa State than their season average while OSU and OU were held to more than 1 point less than their season average.

One thing to point out is that while there were times in the first half of the season that the defense was gashed, by the numbers they still performed relatively well.  Despite all of the improvements made over the second half of the season, the ISU defense still held opponents to less than their average points per possession in the first six games.

What I didn’t use for comparison to how the defense improved is how the offense played.  We all know that the two are linked at the hip, especially with turnovers and scoring.  Iowa State was able to cut the turnovers from the first six games to the last six games.  I didn’t include the offensive numbers for comparison partially because with all of the potential variables you can get lost in a swirling vortex of information when trying to find THE ONE difference to note the improvement.  So, I just stuck with the defensive numbers that speak largely for themselves.

For the most part, I don’t think you need a blogger hack extraordinaire to point out the many major improvements, so take a look for yourself.  I think the improvement itself is quite remarkable but what I am most impressed by is the teams that they did it against.  The perennial offensive juggernauts like Texas Tech, Oklahoma State and Oklahoma.  All while two of those three games were on the road.

It’s a credit to everybody involved in the program, but the defensive coaches along with Paul Rhoads and obviously the kids the execute the schemes and fundamentals have done a masterful job keeping opponents from scoring and out of the endzone.  There’s still one more game this year to further that improvement and still a long way to go for this program as a whole.  But the longer that guys like Paul Rhoads, Wally Burnham, Bobby Elliot, Shane Burnham, and Curtis Bray are coaching up the defense the better off the Cyclones will be.