By Kirk Haaland of enCYCLONEpedia.com

I was most definitely wrong a couple of weeks back when I characterized the Texas game as the clunker of 2011.  That was clearly reserved for Saturday’s trip to Columbia, we hope.  It was evident quickly that the defense couldn’t tackle and the offense wasn’t going to help by moving the ball and scoring a few points.  A quick—and silly—turnover by Steele Jantz and an offense that didn’t move the ball enough, mainly because the rushing attack never got going, never gave the defense any more of a chance.

The hope now is that it is the clunker of the season and wins can still be found on the schedule.  As painful as it is to recognize the little success that the Iowa State football program has had historically, it may be even more painful to recognize that even in the good years the Cyclones have lost plenty of games in ugly fashion.

Even the good years have had plenty of blowout losses to recover from and here’s the proof.  Going back to 1959, there have been 27 seasons that the Cyclones have been roughly a game to a game and half from .500 or better (as it works out, the 27 seasons of a 0.4286 winning percentage and better).

Here are the 27 seasons with their record, winning percentage, # of games lost by 20+ points (the arbitrary number I used to separate the “blowouts”), and the percentage of losses that were blowouts. 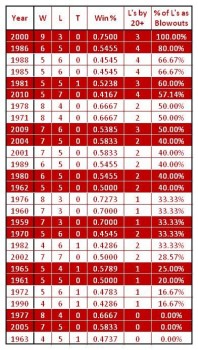 Now first and foremost, there are a number of factors that play into these blowouts and it all starts with the arbitrary number of 20 points as the “separator.”  I would argue that the 2006 game against Nebraska that ended in a 28-14 loss was technically a blowout with how the Huskers dominated the game and there are likely other examples of that playing out in the opposite direction.  However, that is the number I went with for this process.

This is what we know…The Cyclones already have three losses of 20+ points, with two of them coming to top 25 teams.  What we don’t know just halfway through this season is if they will be able to respond and win another two or three games.

My argument here isn’t that everything is a-okay because blowouts are a part of life for the Iowa State football program. What I am pointing out is that even the best seasons for the Cyclone football team has been spotted with ugly losses save a few. This ship can still be righted.

In fact—and I’m probably far from the only one—I had the Cyclones pegged for 3-3 as a best case scenario up to this point. I had them finishing 6-6, and for my scenario to play out that hinges on a home upset win this weekend over A&M and a road win at Kansas State (which is looking more and more difficult).

Blowout losses have been a part of life for the Cyclones, even through the best years.  You only have to flip back 12 months on the calendar before you’re reminded of the Utah and Oklahoma debacles that preceded the win at Texas. That doesn’t make the A&M game a lock to win…far from it.  However, with the way that ISU started the game against Missouri, the three straight blowout losses and the need to bounce back…I will be very surprised if the team does come out flat.

I’m not saying that the bounce back is undeniably going to happen. I’m saying that mentally checking out of this season at the midterm because of the past three losses may be a regrettable decision.  It will be difficult, but six wins is still within reach.  Ugly losses have been overcome before, and will be again.  The obvious question that remains to be seen is which direction will the 2011 Cyclones will go?