Does anybody else have a case of the Monday’s?

Geez Louise. Today has been a doozie. I’ve got a lot of stuff to sift through in today’s musings column. Enjoy.

Thanks to the help of The Iowa Clinic, yours truly will be heading down to Dallas on July 25th and 26th to cover the Big 12’s football media days. While in the Lonestar State, I’ll be conducting live chats, posting blogs, videos, features and creating much more exclusive content for CycloneFanatic.com. In today’s economy, many major media outlets now ignore conference media days. Thanks to the help of the Iowa Clinic, CycloneFanatic.com is dedicated to providing the best coverage of Iowa State football that you can find anywhere. Football season is almost here! Excited yet?

— I was surprised this morning when I learned that Iowa State had offered a basketball scholarship to 2012 Xaverian Long Island shooting guardBrian Bernardi. By all accounts, he seems like a pretty decent prospect this late in the 2012 recruiting campaign. Bernardi is shooter. He’d be legitimate replacement for soon-to-be senior Scott Christopherson and we all know that Fred Hoiberg loves that type of player. I had just never heard of the kid before today. That’s why I raised an eyebrow at the news.

— Speaking of a young Christopherson, how about 2013 Onalaska, Wis. prospect Matt Thomas? He’s blowing up fanatics. In fact, I wouldn’t be shocked if his consistent lights out performances during some AAU ball last week didn’t shoot him straight to the top of Iowa State’s 2013 priority list. Thomas is as good of a 3-point shooting prospect as I’ve seen Iowa State go after and I’ve been covering Cyclone basketball recruiting since 2005. You’ve got to think that Hoiberg’s past is a big coup for Iowa State in this particular situation. Nothing is a lock, but this marriage makes a whole lot of sense.

ON THE CYCLONES/YMCA CAPITAL CITY LEAGUE

— Be careful fanatics. You can’t put too much stock into what you see at the YMCA Capital City League. After all, Bubu Palo looked like Chris Paul last summer. You can’t get a preview for the upcoming Iowa State basketball season by attending these games, but you can get a sneak peak as to what some of these players are all about.

For example, Melvin Ejim dominated the league last summer. Eric McKnight was terrible. That carried over to the Cyclone basketball season.

While I’ve only attended the league on three occasions this year, I can confidently state that for the first time, Iowa State’s players are doing what they should do in the YMCA Capital City League. Absolutely owning it.

These guys are making Drake’s players look very average out there and that’s how it should be. The Big 12 players should be the class of the field.

— I finally got Internet in our new place last Thursday. I’ve been without TV for over a week and a half now. It’s killing me! I’m not the type of guy who watches TV for 10 hours a day either. But I do like to unwind at night you know? Luckily, I’ll get hooked up tomorrow afternoon. Just in time for the MLB All-Star Game.

— I attended my future brother-in-laws bachelor party on Saturday night. Normally, I wouldn’t share this sort of information with all of you. But I feel like because of what we cruised around the great state of Iowa in, I had no choice but to boast a little bit. Check this bad boy out. 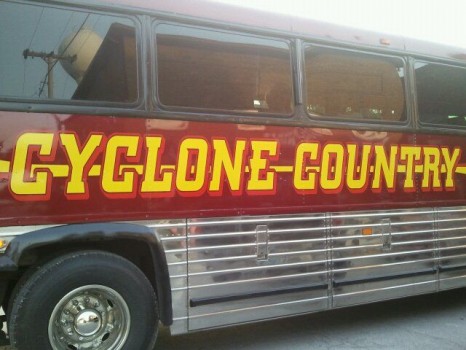