I know. I know. These are a day late. Thanks to the recent basketball commitment of Georges Niang, this week’s musings have been moved to Tuesday.

I’ve got a lot of thoughts to get to on the basketball recruiting front today. To my hoops junky fanatics out there, lick your chops!

– First of all, I didn’t expect 2012 prospect Georges Niang to commit on Sunday. If any of the 2012 prospects were going to commit in the month of May, I figured it would have been Nkereuwem Okoro.

I had last spoken to Niang on May 3 and he seemed to be high on Fred Hoiberg and Iowa State, but wanted to play out the process just a little bit more.

Nope. Niang pledged his allegiance to the Cyclones and because of that, Hoiberg landed possibly his top target in the entire class. That my friends is a beautiful start to 2012. I’ve never seen Niang play in person, but those who have tell me that he is a less powerful version of Royce White, but a stronger shooter.

The first time that I ever interviewed Niang, he said that Hoiberg has compared him to a young Kevin Love.

I also wanted to throw in here that Niang is one of the neatest recruits I have ever interviewed. He’ll be his school’s student body president next year and comes from a stand up family. I’m excited to cover Niang as a Cyclone when he gets to town in the summer of 2012.

– Who’ll be Iowa State’s next commitment? My prediction is Nkereuwem Okoro.

– I’m not surprised that it has been nearly impossible to get anything out of 2011 big man Percy Gibson, who officially visited Ames this past weekend. I’ve literally got nothing for you. Stay tuned though.

From an Iowa State perspective, I would have much rather seen Northern Iowa head coach Ben Jacobson get hired at Texas A&M compared to Murray State’s Billy Kennedy. That would have been a double-whammy for Iowa State.

That’s no disrespect toward Jacobson either. He’s a heck of a basketball coach. I just don’t think that it would have been a very good fit. Jacobson leaving Cedar Falls would have likely weakened the Panther program that has had Iowa State’s number for way too long.

Would I have blamed Jacobson for taking the A&M job (if it would have been offered to him)? Absolutely not. As Ricky Bobby once said, "make that money." But as Greg McDermott learned not too long ago here in Ames, the Big 12 is a blood thirsty league. Recruiting against the likes of Scott Drew, Frank Martin and now Billy Gillispie isn’t always fun and games.

LAUGH OF THE WEEK – OCHOCINCO RIDES A BULL

How can anybody not love Ochocinco? That is a man who loves living life. Quit hatin’. Professional football player or not, I really respect the guy. Ochocinco lives every day like it ishis last.

WELCOME ‘PAISLEY WILLIAMS’ TO THE WORLD

While I’m nowhere near the maturity level where I need to be to have a real kid, my wife and I took a big step this past weekend. Fanatics – Please do your best to welcome "Paisley" Williams to our Cyclone family. Paisley is a golden retriever who will rock an Iowa State collar at CycloneFanatic.com tailgates all fall long.

Though she is cute as heck, I have had second thoughts about this dog thing over the last few nights. Paisley is just over seven weeks old. For those who don’t know, she has to go "potty" like every hour it seems like. Needless to say, I haven’t gotten much sleep since we picked her up on Friday. This is good for me though right? Plus, I scored some major brownie points with my wife on this one.

"There’s no amount of stress that a cute puppy can’t cure," she said. Uh huh… 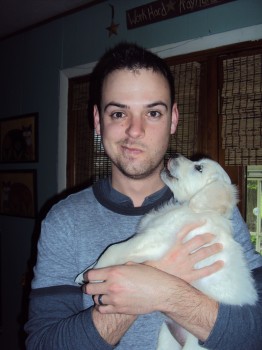 Most of you know by now that I am a huge fan of auto racing. NASCAR, INDY cars, F-1, dirt , etc. It doesn’t matter. I love it all. That’s why I’m so pumped up about a new aspect to my career that I’ll launch this Sunday on Des Moines’ Sports Station 1460 KXNO. Along with my former radio partner at KMA (Shenandoah) Steve Cabbage (Steve is a long time racing broadcast veteran on the western side of the state), we’ll host a prerace show for the NASCAR Nationwide Series race at the Iowa Speedway, live from 10-11 this Sunday. We’re calling it "Iowa Speedway Race Day." We’ll broadcast four prerace shows this year including the two NASCAR Nationwide races, the INDY car event along with the NASCAR Camping World Truck Series race.

– I’ve got a lot more stuff to come today in a Cyclone roundup. Check out CF later on for that! As always, thanks for reading everybody!